What happens after that might be particular to Quin Woodward Pu, author of a pair of self-published memoirs about becoming a writer, public relations worker and self-described hypomanic girl-about-town in the nation's capital instead of attending medical school.

This is the text Pu got right before her birthday. She was turning 26, she writes on her blog. She'd been out with the guy twice. 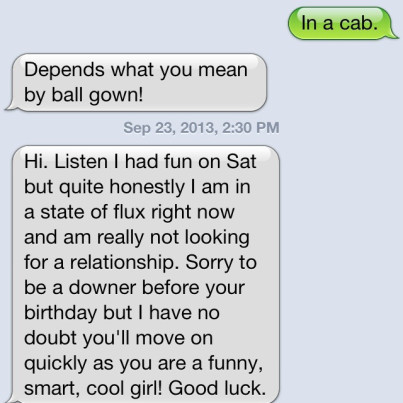 Pu says -- again, on the blog -- she was, at first, "stunned into paralysis" by the breakup text, and "had no words."

Some half a day later her communicative abilities returned -- she then issued a long and angry text of her own, declaiming the idea that "as a 25 year old with two published books and a condo" she even wanted a relationship with this man in the first place.

And, she writes, adding injury to indignity, she forwarded "taxpayer-funded sexts from your agency blackberry" to the guy's manager at work. 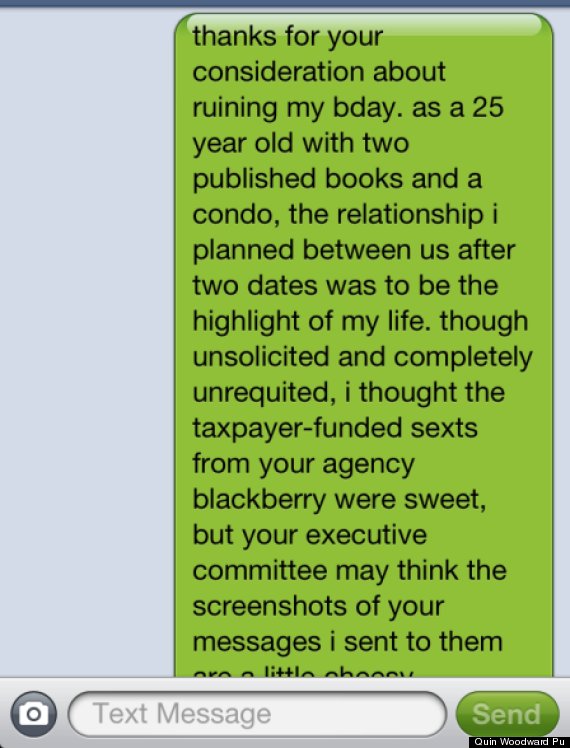 Look, yes, like a lot of people on the internet have noticed, Pu makes a big deal about the condo. It's "adorable and small," and in a good part of D.C., she tells HuffPost. "I am having two chandeliers installed into it." But it's also symbolic of not needing a man -- "some rando," as she put it on her blog -- to jump in and take care of her.

"I wanted him to see that I am a self-sufficient person," she says.

Which leads to the next point that Pu would really like to make clear about this whole brouhaha: She wasn't upset about being broken up with, per se. She was actually just upset that the guy was "presumptuous" enough to think she could be broken up with.

"I did NOT have a sexual relationship with this person," she says. "I went on two dates. In my book, I call that getting to know someone. This is why the 'dumping' infuriated me so much."

Describing herself as thick-skinned, she says she has also more or less ignored the vitriol (there's a lot of it) that her blog post has provoked since going viral. And, she tells HuffPost she has a date for Thursday night, so her romantic life is also just fine.

As for the fellow who sent the breakup text -- he's fine too, apparently, since Pu tells HuffPost she did not, as initially claimed, actually forward the sexts. "He is safely and soundly still employed," she says. He's also been back in touch.