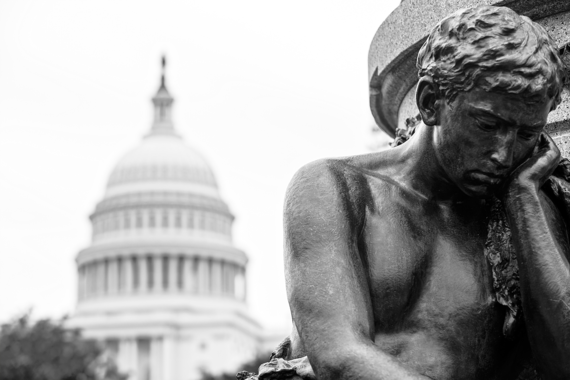 I can't believe I'm actually saying this, but Donald Trump is currently a viable Republican candidate in the 2016 presidential race. You may define "viable" in any way you choose, but my personal definition is "in the debate this week." My definition ends there.

His polling numbers are confusingly strong. There are people out there, people we know, people we're related to, people in line behind us at the post office, people standing next to us right now in an elevator that want Trump to be president. Of our country. They want him in charge of the nuclear codes. They want him to have veto rights. They want him to command our armed forces. They want him to broker peace deals with ISIS. No seriously, the guy with the hair and the temper talking to ISIS is what they want.

While we remain inside this fever dream, we can look to those that have already dumped Trump to remind us there are good and rational people still left in America, and thankfully their votes count too. Way before Hispanics, veterans, GOP leaders, NBC, Macy's and people with a good grasp on reality started distancing themselves from Trump, there were two women hightailing it out of Trump's life -- his ex-wives.

Eternally glamorous, bejewelled and be-accented (not a word) Ivana hit the bricks in 1992, with Marla Maples following suit in 1999. Trump and Ivana's divorce hit the headlines recently due to alleged rape claims, or due to poor word choice, depending on who you believe. While that's being hashed out by proper journalists, let us focus instead on the other less potentially criminal details. It was an ugly divorce and an excellent breeding ground for amazing one liners such as "Don't get mad, get everything."

Tabloids at the time said the split and ensuing money battle was better than anything Dynasty churned out. Most fascinating to me is, did you know a 1987 Mercedes was a big sticking point in their settlement? Odd they'd be fighting over a five year old car when either party could buy a Mercedes made out of sapphires and caviar. What a weird thing to squabble over. Most agree it was a power move by Ivana and in the end she got the car plus an estimated $25 million. I am assuming she had to sign a strict NDA barring her from ever speaking of any trade secrets. By trade secrets, I mean the architecture behind Trump's haircut.

His first marriage disintegrated thanks in large part to his relationship with Marla Maples, his soon to be second wife. Maples recounted her life in the tabloids in a great New York Magazine piece. When news of the Trump/Ivana split hit the papers, Maples fled to Guatemala for a month to get away from reporters. She came back and they married, but it didn't last. The Trump/Maples divorce was much less Dynasty than divorce number one. Maples explained the marriage's demise had a lot to do with press pressure, lack of privacy and Trump's dedication to his work. That's quite polite of Maples seeing as we all know it probably mostly due to his insufferable personality.

Trump married for a third time in 2005 and so far that marriage is sticking. So dumping Trump was left to companies, ethnic groups, television conglomerates and people who understand how diplomacy works and what the job responsibilities of a president are.

I'm not sure how long it will take for Trump supporters to come back around to this place we call reality. It might be when Trump inevitably says something racist, illogical or just plain dumb in tonight's debate. It might be on November 8, 2016. I truly hope it won't have to be when he's in power and decides to sell Alaska to Russia to pay for fence to keep us safe from Canadians and their un-American Canadian bacon. Or when he bolts giant gilded T R U M P letters onto the side of the White House. Or when he bankrupts the country just as he's done to his businesses time and time again. Or when a large gust of wind comes along revealing underneath that yellow cotton candy there's a "666" tattooed on his head.

Get your popcorn handy because Thursday's debate is sure to be entertaining.