Dunkin Donuts has pulled a commercial featuring pitchwoman Rachael Ray wearing a scarf because Michelle Malkin and other conservative observers thought the scarf looked too much like a keffiyeh, what Malkin describes as "the traditional scarf of Arab men that has come to symbolize murderous Palestinian jihad." 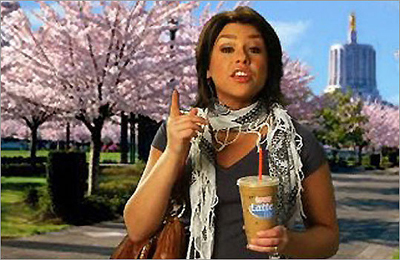 The Boston Globe reports that Dunkin Donuts caved to pressure from the conservative blogosphere — and the fear of a mass boycott — and removed the ad:

The company at first pooh-poohed the complaints, claiming the black-and-white wrap was not a keffiyeh. But the right-wing drumbeat on the blogosphere continued and by yesterday, Dunkin' Donuts decided it'd be easier just to yank the ad.

Said the suits in a statement: ''In a recent online ad, Rachael Ray is wearing a black-and-white silk scarf with a paisley design. It was selected by her stylist for the advertising shoot. Absolutely no symbolism was intended. However, given the possibility of misperception, we are no longer using the commercial.''

Malkin praised the decision in her column, writing,

It's refreshing to see an American company show sensitivity to the concerns of Americans opposed to Islamic jihad and its apologists. Too many of them bend over backward in the direction of anti-American political correctness....

Fashion statements may seem insignificant, but when they lead to the mainstreaming of violence -- unintentionally or not -- they matter. Ignorance is no longer an excuse. In post-9/11 America, vigilance must never go out of style.

Malkin has previously lauded Dunkin Donuts for its support of immigration laws.