On Friday afternoon, a handful of Dunkin' Donuts stores remained open in the Boston area to serve coffee and donuts, despite the widespread lockdown of the city and surrounding areas. Karen Raskopf, chief communications officer for Dunkin’ Brands, said the orders to remain open came from the city.

"At the direction of authorities, select Dunkin' Donuts restaurants in the Boston area are open to take care of needs of law enforcement and first responders," Raskopf told The Huffington Post in an emailed statement.

BuzzFeed first reported the news on Friday morning that many outlets were still open, noting the city's reputed affection for the national donut chain. However, in neighboring Watertown, some Dunkin' Donuts were ordered to close by late morning, according to two stores contacted by The Huffington Post.

Surya Thapa, owner of a Dunkin' Donuts store on Mt. Auburn Street in Watertown said he was ordered to close around 11 a.m. He said the loss of business could cost him as much as $4,000 to $5,000 for the day. Despite the loss of business on Friday, Thapa said he supported closing down his shop. "I cannot risk my employees' safety," he said.

When asked about safety concerns at the stores that are open, Raskopf said, "The select open restaurants in the Boston area are those in areas with a heavy law enforcement concentration in order to serve first responders. We have been in touch with the authorities regarding which restaurants to have open and closed."

In downtown Boston, most restaurants were shuttered at Friday lunch hour.

One dining institution, however, was open for business. When contacted by The Huffington Post, Wesley Hagan, an employee at the Union Oyster House, confirmed that the restaurant was open on Friday and the oyster bar was stocked. Hagan said the restaurant had not been ordered to close.

How Investigators Found The Suspects

The Washington Post has published a long account of investigators' exhaustive efforts to find the Boston Marathon suspects using mountains of video footage and photographs, as well as other leads. An excerpt:

Quickly, the authorities secured a warehouse in Boston’s Seaport district and filled the sprawling space: On half of the vast floor, hundreds of pieces of bloody clothes were laid out to dry so they could be examined for forensic clues or flown to FBI labs at Quantico in Prince William County for testing. In the other half of the room, more than a dozen investigators sifted through hundreds of hours of video, looking for people “doing things that are different from what everybody else is doing,” Boston Police Commissioner Edward Davis said in an interview Saturday. The work was painstaking and mind-numbing: One agent watched the same segment of video 400 times.

CBS News: Dzhokhar Tsarnaev May Have Tried To Commit Suicide

CBS News reports that Boston bombing suspect captured on Friday night suffered at least two bullet wounds, and that one of them may be evidence that he tried to end his own life.

The bullet wound to the neck, which has an exit wound in the back of the 19-year-old’s neck, “is very possibly a suicide attempt,” said Miller, a former assistant director at the Federal Bureau of Investigation.

Two Friends Of Dzhokhar Tsarnaev Taken Back Into Custody

The two men, known to neighbors by their first names Azmat and Diaz — who share a black BMW SUV adorned with a novelty license plate that reads “Terrorista #1” — were cuffed and hauled out of their Carriage Dr. apartment shortly before 4 p.m.

The apparent arrests occurred about 30-45 minutes after authorities with the FBI, ICE and the U.S. Department of Homeland Security descended on the Hidden Brook Apartment complex.

The Guardian has an account of the dead bombing suspect's 2012 voyage to Dagestan, a small, troubled region of Russia where he had once lived:

According to US travel records, Tsarnaev arrived at Moscow's Sheremetyevo airport on 12 January, returning on 17 July. He spent time in Makhachkala that summer. "It was 40C and he was wearing these American boots," said Larissa Abakarova, who maintains a shop across the street from the home of the parents of Tsarnaev and his brother, Dzhokhar, who was arrested late on Friday. "He was stylish, kind, good-looking. I'm in shock."

The Washington Post has a new story that fills in many details of the Tsarnaev brothers' bloody path to Watertown, including their murder of an MIT Cop:

Just after 10:30 p.m. Thursday, the pair walked up to a parked police car at the Massachusetts Institute of Technology, where Sean Collier, a 26-year-old campus officer, was nearing the end of his 3-to-11 p.m. shift.

A security camera would later show two men approaching the car and speaking to the officer. Abruptly, one of the men was seen pulling a gun and shooting Collier multiple times, including once in the head. Some officers concluded that the shooting was an effort to provoke a larger confrontation with police.

“They were looking to start something,” one official said.

Older Brother, Uncle Had Falling Out Over Islam

Ruslan Tsarni says he grew concerned about Tamerlan Tsarnaev (tsahr-NEYE'-ehv) when he told him in a 2009 phone conversation that he had chosen "God's business" over work or school. Tsarni said he then contacted a family friend who told him Tsarnaev had been influenced by a recent convert to Islam.

A doctor involved in treating the Boston Marathon bombing suspect who died in a gunbattle with police says he had injuries head to toe and all limbs intact when he arrived at the hospital.

Dr. David Schoenfeld said 26-year-old Tamerlan Tsarnaev was unconscious and had so many penetrating wounds when he arrived at Beth Israel Deaconess Medical Center early Friday that it isn't clear which ones killed him, and a medical examiner will have to determine the cause of death.

A Key Turning Point In The Investigation

The New York Times reports that the decision to release the photos of the marathon bombing suspects to the public was a major turning point in the investigation.

The authorities knew that broadly distributing the images — some captured by ubiquitous surveillance cameras and cellphone snapshots and winnowed down using sophisticated facial-recognition software — would accelerate the digital dragnet, but they did not realize the level of chaos it would create.

Intelligence and law enforcement officials said the authorities in Boston weighed the risks of some mayhem against their growing fear that time was slipping away and that heavily armed and increasingly dangerous men, and possibly accomplices, could wage new attacks in the Boston area or beyond.

Map Of Boston's Reaction To The Bombing On Twitter

Syracuse University Professor Anthony Rotolo and student Andrew Bauer mapped 200 of the tweets sent out from Boston in the hours right after the marathon bombing, creating an interactive portrait of the city's reaction to Monday's horrifying events. 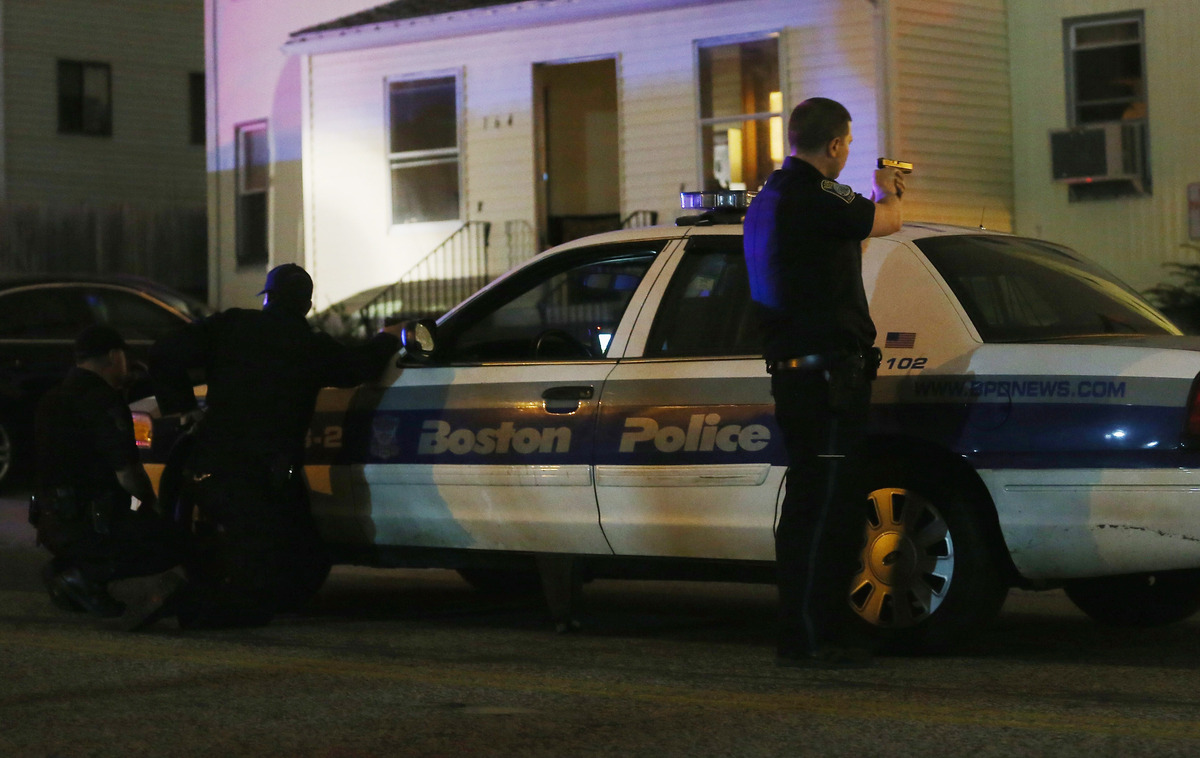 1 / 15
Police Search For Suspect
A police officer with gun drawn searches for a suspect on April 19, 2013 in Watertown, Massachusetts. Earlier, a Massachusetts Institute of Technology campus police officer was shot and killed late Thursday night at the school's campus in Cambridge. A short time later, police reported exchanging gunfire with alleged carjackers in Watertown, a city near Cambridge. It's not clear whether the shootings are related or whether either are related to the Boston Marathon bombing.
Mario Tama/Getty Images