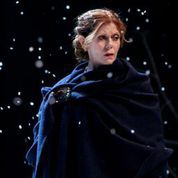 Scottish playwright David Greig's impressive sequel to Shakespeare's Scottish play resonates on many levels -- political, religious and cultural. What is ostensibly an excursion into the troubled history between Scotland and England bursts forth into a universal exploration of the tragedies of war and occupation and the poignant complexities of culture and politics.

The play opens where Shakespeare's ends -- Macbeth is dead, the English forces under General Siward are victorious and Malcolm, the rightful heir, is on the throne. In Shakespeare's version, Lady Macbeth has apparently committed suicide. However, in Greig's play, she is very much alive and still fighting for power.

In her Gaelic persona as Gruach, Lady Macbeth (in a transcendent performance by Siobhan Redmond) schemes her way back to the throne using Scottish guile, feminine wiles and a bit of Gaelic magic. Siward, played by a stalwart Darrell D'Silva, descends from the glorious conquerer to the humiliated victim, not only of Gruach, but of his own role as occupier in a foreign land.

Grieg delivers a lesson right out of our own recent history in Iraq, in which the victorious military conquerors became mired in the occupation of a country that descends into tribal warfare and ultimately suffers the fate of many occupiers in countries around the world and throughout history. As the sly and smarmy Malcolm (marvelously portrayed by Ewan Donald) explains, ruling Scotland is not for the faint of heart, or for anyone devoted to peace. When Siward asks why the Scots are fighting him so hard, one character answers "We are fighting you because you are preventing us from fighting each other."

Under the direction of Roxana Silbert, Grieg's play is a lively and dramatic exploration of universal themes, and has an engaging tone that flows seamlessly between humor, contemporary commentary and dramatic moments. The satisfactions are both emotional and intellectual, as the hapless English, clearly out of their depth in the maze of Scottish culture and politics, struggle to comprehend an utterly foreign land. "We don't we just go home?" is the relentless hue and cry, and yet the English general Siward staggers along, becoming more brutal and desperate as he tries to impose peace through greater and greater displays of violence.

The National Theatre of Scotland and the Royal Shakespeare Company have assembled an outstanding ensemble of performers. Tom Gill, the boy soldier who serves as narrator has a vulnerable, contemporary quality that immediately draws us into the action, Keith Fleming is an energetic and convincing MacDuff and Alex Mann is spot on as the English pessimist who sees the whole charade for what it is.

It takes courage to write a sequel to a Shakespeare play, especially when it rampages so shamelessly through English history. But Grieg is clearly up to the task. While the play may not be Shakespearean in tone and scope, it is an important contribution to modern dramatic literature.