"I was getting divorced, I'd been partying with drugs and it depleted me in every way," Hoffman said through tears while being honored by the British Academy of Film & Television Arts on Tuesday. Hoffman was separating from Anne Byrne when "Kramer vs. Kramer" came to him through director Bob Benton, but he didn't accept the role until the script was re-written to accurately replicate his pain. Hoffman and Benton worked on the script, but the actor told ceremony attendees that he didn't request credit for his work. "[I] stupidly turned it down," he said.

In a 2001 documentary about "Kramer vs. Kramer," titled "Finding The Truth: The Making of 'Kramer vs. Kramer,'" Hoffman said that it was the acting itself, and not the dalliance with uncredited screenwriting, that was cathartic.

"It was the first time I ever made a movie where I was living through what I was acting -- unlike a writer or painter, who gets up in the morning and can exorcise what they're going through," he said. "It's quite unusual to be getting a divorce, my first and only divorce, at the time I'm shooting a movie about a man getting a divorce."

During the BAFTA ceremony, Hoffman praised his co-star Meryl Streep for her work in the film (Streep also won an Academy Award for "Kramer vs. Kramer"), but the actor wasn't as kind to Streep on set.

"I found out much later while we were doing the publicity, that he was mad at me. He, Dustin, was mad at me, Meryl," Streep recalled in the 2001 film. "I didn't know that. I still don't know why. I've read some of the stuff that came through. He was doing the interviews and he was saying that he was so furious with me and that I was playing a game with him."

"I'm sure I was acting out on her throughout the movie," Hoffman recalled. "Stuff that I was feeling toward the wife that I was divorcing in real life."

Hoffman's anger even manifested itself during an improvised scene where he threw a wine glass into the wall, surprising an unaware Streep.

"She was pissed," Hoffman remembered.

For more on the "Kramer vs. Kramer" backstory, watch a section of "Finding the Truth" below. To find out which "Charlie's Angels" star almost won Streep's role, head over to THR. 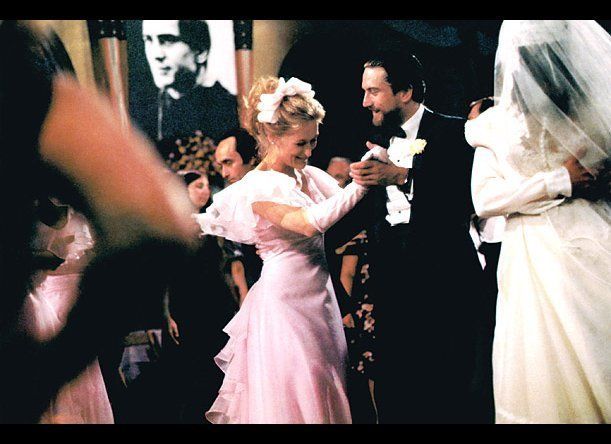 1 / 12
The Deer Hunter (1978)
<a href="https://www.huffpost.com/entry/meryl-streep-barnard-grad_n_580335" target="_hplink">Meryl has described her character </a> as "a lovely, quiet, hapless girl... just behaving in a way that cowed girls, submissive girls, beaten-up girls with very few ways out have behaved forever and still do in many worlds." Her frilly, non-threatening dresses bear that out perfectly.