Thanks to the efforts of restorers like Indianapolis-based Carlton Smith (referenced in Part I of this article), the theatre organ no longer faces imminent extinction. Using organizations like the American Theatre Organ Society (ATOS), the great theater organists of the country must continue to partner with devotees to expand the audience for this instrument whose heyday was nearly a century ago. The cohesion of the Indianapolis theatre organ community places the city's prominence at the level of Seattle and Los Angeles, despite their greater size. 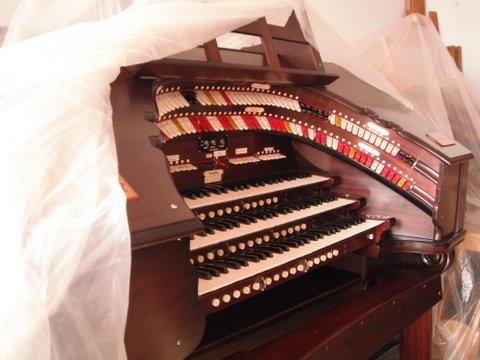 A Wurlitzer nearly completely restored by Carlton Smith and his team, awaiting shipment to its new home.

Recognizing that a market still exists for the spectacle of vintage movies in old picture palaces, theatre organist Mark Herman (who lived in Indianapolis until recently) has made a lucrative part-time vocation out of accompanying silent films at surviving venues across the country.

"A lot of the future success of the theatre organ will be based on its original purpose, which is accompanying silent films of the 1920s," Herman said. "You have to be well acquainted with a film . . .otherwise the music will just meander for an hour and half. Being a good improviser is very necessary, because you cannot possibly read music for an hour and a half straight, but you have to. . .put together themes for a picture, find out if there were any original scores or cue sheets, and take that into account."

Herman has a couple dozen short films in his repertory (mostly comedies by Buster Keaton, Harold Lloyd, or Laurel and Hardy), and four feature-length films as well. At the time of the interview, he was working on some Douglas Fairbanks swashbucklers. Unlike the classical organ -- steeped in a tradition that makes it appear more than a little exclusive or even elitist to some -- Herman attests to the accessibility of the theatre organ: "People from all walks of life -- every socioeconomic and educational background -- are passionate about the instrument." If only more knew that it exists.

Typical of most theatre organists, Herman sees it as his real musical outlet -- one that does not readily translate to classical organs or church music, of which he has little interest. Conversely, Martin Ellis is among the few in the country who enthusiastically shifts between both. Until recently the Assistant Director of Music at North United Methodist Church and a Hoosier by birth, he left Indy over the previous summer for a position at a Presbyterian Church in Portland, Oregon. But he also grew up captivated by the performers at Paramount Music Palace, and joined ATOS as a junior in high school, winning the first competition for young artists. In the Indy area, he sees the Circle Theatre's installation as a premier example, and the Paramount Theatre in Anderson is great too. Ellis also witnesses the long-perceived cultural schism between classical and theater organ, but sees it as one that is mending itself through younger, more open-minded generations, who are willing to look at it all as pipe organ in general. "The bigger battles right now when it deals with organ. . .is between the preservationist and the 'relevationist,'" he reflected.

Ellis has mixed feelings about the capacity of ATOS to help the instrument grow, because many of its members haven't broadened their outlook on what popular organ music can entail. He noted, "I can find on YouTube all the time. . .all these junior high and high school kids playing rock on pump organs. They start cranking out what is sometimes really good craft. If there's excitement coming from these kids for that kind of instrument, which has a real limited amount of what it can do, it makes the point that certainly if we were to feature aspects of theatre organ and how it can do that only better and be a lot louder and bigger, that would make a point." Many organ purists sneer at the success of young Cameron Carpenter, who is the closest the organ community can claim to a rock star, but Martin Ellis is confident that Carpenter, despite his dependence on a synthesizer for his tours, is exactly the direction it needs to go, because "[Carpenter] doesn't think there is a difference [between classical and theatre organ]."

Tim Needler, chair of the local ATOS chapter, recognizes that maintaining the theatre organ's visibility -- and its viability--is an uphill battle, with the competition of so many other multisensory forms of entertainment. At least the classical pipe organ still has the churches, even if those that use and maintain their organs are declining in attendance. Fortunately, the theatre organ doesn't bear the yoke of elitism. "It's just the opposite," Needler said. "And yet, once [the classical organ elite] gets to a theatre organ concert, I'll ask them, 'Did you enjoy it?' 'Yeah, yeah, that was neat.' And what they admire is the fact that there is no music written for theatre organ, and when they understand that. . .[theatre organists] do their own arrangements. . .I think [church organists] began to realize that [theatre organ] is not an easy thing to do." Needler sees this distinction as a key to theatre organists' musicianship. "It's a complicated instrument, much more so in a sense than a 90-rank Casavant."

"I know a lot of degreed professional organists that refuse to not play the notes on the page, yet here [with the theatre organ] are people who do these things on a regular basis," Tom Nichols related to me. Even though he is first and foremost the organist at St. Luke Catholic Church, Nichols clearly shares Needler's admiration for the theatre organ culture. He is a member both of ATOS and the classical-leaning American Guild of Organists (AGO). Not only has he studied the mechanics of theatre organ assembly under Carlton Smith, he has helped with the installation of key local instruments, including the one at Warren Performing Arts Center and the Hilbert Circle Theatre. "It's really just a lot of learning by doing. . .If I had known in high school what I know now, I might have gone. . .into the technical, organ-building side of things," Nichols said, marveling at the instrument's intricacy. While he doesn't consider himself a theatre organist, he understands and appreciates the instrument's distinct intricacy. "In this age of MIDI and instant gratification and download download download, there's still this mechanical thing that someone has to engineer and maintain. . .and someone else has to learn how to play." 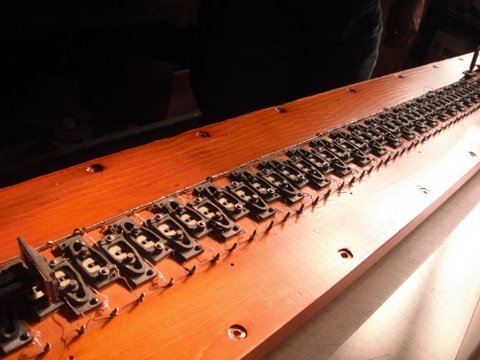 The bottom side of a partially restored pipe chest at Carlton Smith's studio, lined with partially assembled electromagnetic valve assemblies that activate each pipe when the organ's relay system sends voltage to them.

With the recent departures of Herman and Ellis, Justin Stahl has begun carrying the mantle as one of Indianapolis' most prominent theatre organists. Like Ellis, he serves a church--First Christian (Disciples of Christ) in Beech Grove--but has also worked in an academic setting: as the Choir Director at Charles A. Tindley Accelerated School in the Meadows area. Stahl's previous tenure at Warren Central High School helped establish his strong familiarity with the Barton theatre organ in their Performing Arts Center. "I think of [the theatre organ] more as sort of a one-man band. With this instrument I can create a military band; I can create a rock band; I can create a jazz band; I can create a symphony orchestra. And I'm the arranger; I'm the conductor," Stahl said. "There is not to me as big a contrast of ranks available [with the classical organ]." Most recently, the Indianapolis Symphony Orchestra commissioned him to serve as the organist for the Yuletide Celebration, which, thanks to the excellent installation at the Circle Theatre, has let Stahl significantly expand the organ's exposure to a new audience that hasn't necessarily sought it.

Stahl also shares Ellis' view that theatre organs must adapt significantly to changing musical tastes if they want to stay viable, especially considering that they never intended to be the featured attraction. "The era of the two-hour sit-down concert. . .is drawing, slowly but surely, to a close," he observed. "It was a capitalist's dream. This was made to replace an orchestra. You put one of these babies in your theatre, you just saved yourself however many thousands of dollars paying 35 musicians, seven days a week, to play for movies." But it was an alarmingly short-lived era. "There are people who think you should not change the physiology of it. . .and then there are people like Martin and I who want to. . .program it to play something like 'Bohemian Rhapsody,'" Stahl said. "What is going to keep the organ around for another 10, 20 years? Because the future is bleak. . .One of my claims to fame is playing 'Africa' by Toto. And I have a couple of songs by Journey. I play some Billy Joel. [We] are very much about playing what's going to please the most active audience."

Without this ability to adapt with the times, Ellis and Stahl fear it could flicker and fade, as it did at the old Paramount Music Palace on the east side. "We [at Carlton Smith Restoration] have a number of organs in storage right now. . .but we don't have what we feel to be a good home for them," Nichols noted. "When the Paramount Music Palace closed, they tried very hard to find another venue for that organ to be able to stay. . .a way for it to be incorporated into Circle Centre Mall somehow." But it didn't work out, and the organ migrated to a similar restaurant in Florida. Thus, it appears that, while classical organs remain largely tethered to their churches, theatre organs have turned into musical orphans, perpetually searching for a stable home. But the challenges in finding an audience remain the same for both: "We're sharing a life boat," Stahl asserts. "We both are starting to see that we need to rely on the other to keep each other around a little more. . .There is a growing mutual respect for the artistry. . .The organ as a craft is a globalizing frame of mind."

All photos taken by author. For further resources on the classical organ, please visit the following articles from his blog, American Dirt.