Virtually anyone who grew up in Indianapolis in the 1980s has at least a vague recollection of the Paramount Music Palace, even if it was only through their tuneful commercial on early morning local news. For those of us who experienced it firsthand, I'm willing to venture those memories remain crystal clear, two decades after the establishment closed. I don't imagine I visited the Music Palace more than a half dozen times (probably less), but I can remember the snakelike lines for both ordering the pizza and entering the Palace, while a potpourri of tone colors reverberated their way out the front door.

When I was older, I reflected on the PMP and how, because it was such a smoothly put-together concept (and, yes, a bit of a gimmick), it must have been a chain. But it wasn't. It was an Indy original. And the 42-rank Wurlitzer (originally from the Paramount Theatre in Oakland, California had such a lasting influence on young people who grew up with it that it elevated Indy to one of the county's leading cities for perpetuating the culture of the beloved but often neglected theatre organ -- the pop-culture counterpart to pipe organs' highbrow, ecclesiastical bent. These vintage instruments aren't generally that easy to find, but a small cadre of devotees are doing their most to ensure they don't pass into oblivion. And Indy has its fair share.

"There is rarely a time when I play pre-show... inevitably whenever it's a pretty decent-sized crowd, someone will come up to me and talk to me about, 'oh, is that the organ from Paramount Music Palace?'" Justin Stahl told me while sitting at a theater organ at the Warren Performing Arts Center, on the east side of the city, where he performs and practices regularly. "It's got almost a cult following in the depths of the city's history." Like many other Indianapolis-based theatre organists -- and the city has spun out a remarkable array of talent for its modest size -- Stahl saw the Palace, which operated from 1978 to 1995, just a few miles away from Warren High School, as an inspiration for developing his craft at the instrument. 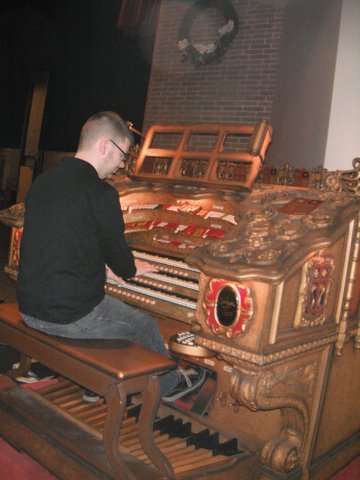 Organist Justin Stahl performs at the theater organ (from the Barton Company) at the Warren Performing Arts Center, part of the eastside high school's auditorium.

In fact, the Central Indiana Chapter of the American Theatre Organ Society (ATOS) is among the most vibrant in the country, using its strong network to attract national conferences to the city, where both local and non-local talent test their mettle on various instruments across town. Mark Herman, who based his variegated creative talents in Indianapolis until recently (and now lives in Pasadena, California) agreed with Stahl's assessment: "The Paramount Music Palace... helped the ATOS chapter here grow... We still present usually about four concerts each year," he observed. "The group has installed several organs, all of which are extremely fine installations." Herman attests that the Paramount Music Palace was one of the best "at putting the general public and the theatre organ in contact with one another."

It has been an uphill battle for the small but close-knit community of theatre organ aficionados, a coterie that includes performers, collectors and hobbyists, all unified most powerfully through the ATOS. Indianapolis enjoys a particularly prominent dot on the map because of localized efforts to restore and preserve particular theatre organs, where Anderson native Carlton Smith is one of just a few in the nation who has devoted his life to the craft. Tucked away in the Stutz building, Carlton Smith Pipe Organ Restorations features, at any given time, a half-dozen instruments in various stages of completion, with several more in storage awaiting his deft touch. It would be easy to say he saves them from their demise, but in many cases they're already dead. Smith resuscitates them, sometimes for old picture palaces that have enjoyed a concurrent renewal, but often in private residences. 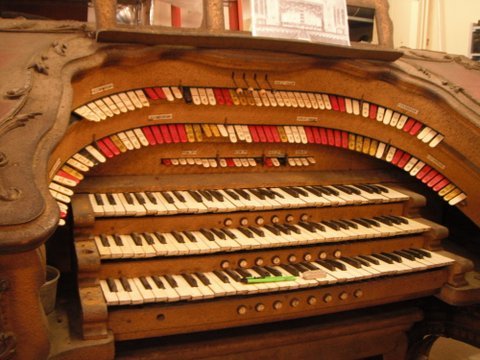 "A sizable theatre organ -- 13 ranks and up -- will take us two to three years to restore," Smith observed. "Of course, we still have smaller jobs, just components that someone might send us to rebuild. I primarily started my recognition in the theatre organ world by restoration of consoles [the apparatus at which the organist sits and operates to make the sounds]... sometimes we electrify them now instead of rebuilding the wind action." Smith noted that he and his small team have to accommodate what the auditoriums want, and his fine arts background makes him widely sought after by purists because of his strong attention to restoration of the ornamentation on the instrument.

Smith is among many who recognize that ATOS largely emerged when the future of the instrument was seriously threatened. Tim Needler, chair of the Central Indiana chapter of the ATOS and an accomplished organist himself (though rarely before the public), recognized that they fell into neglect by the dawn of World War II, then shortly thereafter were scrapped. "Most theatre organs were either left in the theatres or junked when air conditioning came in because those chambers became a great place to put the equipment. Then, of course, the Second World War... there's materials there for the war effort," Needler recalled. The others fell into desuetude, so that today, according to Needler, "There's probably fewer than a thousand. When you figure that every town had a theater of some sort, and almost every theater had an organ, so there were thousands and thousands." Even a city like Indianapolis -- not very big in 1930 -- probably had close to 100 theater organs.

But their reign was remarkably short. Big names like Barton, Möller, Kimball and of course Wurlitzer innovated like gangbusters to enhance the silent film experience. "1926 to '28, I would say, were the boom years," Carlton Smith told me. "The boom years for the musicians, too. In a big theater, at a local level, they were rockstars. They had cult followings. Fans wrote them letters. The girls swooned over the guys." But Al Jolson's The Jazz Singer (1927) kicked off the era of the talkies -- a technological advancement that soon became the status quo for movies and rendered the theater organ a dowdy curiosity.

The second half of this article will explore how different local theatre organists are seeking new methods of keeping the instrument relevant. All photos taken by the author.