THE HAGUE, Nov 12 (Reuters) - The Dutch see themselves as tolerant pragmatists, especially adaptable if social harmony or commercial interests demand it.

But that self-image has taken a battering in recent weeks as a growing chorus of voices inside and outside the country protest against a Christmas tradition that many Dutch see as harmless fun but critics say is racist.

According to the folklore, Saint Nicholas arrives in the Netherlands in mid-November accompanied by his servant Black Pete - a part usually played by a white man in "blackface" with a curly wig and large, red-painted mouth.

Now the Dutch are being forced to confront the possibility that their enormously popular Christmas tradition might point to a latent racism which many thought was anathema to their culture.

Few debates have stirred such emotion among the cool-headed Dutch. Millions flocked to "like" a Facebook page backing Black Pete after an advisor to the U.N. Human Rights Commissioner criticised the tradition.

Prime Minister Mark Rutte has rejected depictions of the Netherlands as insular and xenophobic.

"I do not recognise ourselves in that portrayal," he told reporters last week when asked whether the Netherlands no longer tolerated outsiders.

But that is the point that has been exposed by the debate, according to Quinsy Gario, an artist who has campaigned against the Black Pete tradition for years.

"We've lied to ourselves about our tolerance for so long that we don't recognise discrimination any more," he said. "There has been structural exclusion of minorities for decades."

He said the children of the many immigrants to the Netherlands were becoming increasingly vocal about confronting signs of racism that their parents may have chosen to ignore.

"You have third- and fourth- generation people who see it as their own country and they want to take responsibility for their own and their kids' sake," he said.

The furore over the revered tradition, which some art historians say has its roots in a 17th century fashion for well-to-do Amsterdam families to keep a black house slave, has exposed the sensitivity of race in the Netherlands.

Wealthy and fast-growing in the years after World War Two, the Netherlands was a major destination for economic migrants from southern Europe, Turkey and Morocco in the 1950s and 1960s.

In 2010, around 11 percent of the population was foreign-born, according to Eurostat. Most have acquired Dutch citizenship, a sign of the country's successful integration policies.

Out of a population of around 16 million people, more than 3.5 million are foreign-born Dutch citizens or the children of non-Dutch immigrants, according to the official statistics agency.

The largest immigrant populations include those from Turkey, the former Dutch colony of Suriname and Morocco.

Some Dutch blame the influence of outsiders, from Muslims to interfering European Union bureaucrats, for the erosion of Dutch culture and social benefits, particularly at a time when many Dutch are feeling the pinch of the economic slowdown.

"Many Dutch people feel fundamentally threatened," said Laurens Buijs, a sociologist at the University of Amsterdam.

"As if they feel Brussels, or the UN, want to take away who we are, our identity."

Such fears have boosted support for Geert Wilders, the populist anti-Islam politician who wants to stop immigration by Muslims as well as eastern Europeans, and wants the Netherlands to leave the euro and claw back powers from Brussels. He has even set up a website where people could file complaints about eastern Europeans.

Andre Krouwel, a political scientist at Amsterdam's VU University, agreed an intolerant streak has been exposed.

"It's evidenced by the strength of anti-Muslim parties compared to other countries like Germany," he said.

The Dutch record in fighting discrimination has been criticised in recent months by Amnesty International and the Council of Europe, the continent's human rights watchdog.

Most big-circulation Dutch newspapers leapt to the Netherlands' defence when Verene Shepherd, a Jamaican academic who advises the U.N. Office of the High Commissioner for Human Rights, said in late October that the tradition of Black Pete was racist.

The daily Algemeen Dagblad gave over its front page to a montage of portraits of black and Asian Dutch citizens, all of whom said they supported the tradition.

But in an opinion piece for the Volkskrant newspaper, Roomyla Choenni, a Dutch consultant of Surinamese descent at IT outsourcer Capgemini, said Black Pete "keeps alive an atmosphere of everyday racism."

"In many people's eyes, the Netherlands is meant for white people, preferably with blue eyes and rosy cheeks," he wrote.

Many of the Africans who work at the international courts in The Hague as judges, prosecutors, lawyers and court officers - services which contribute to the region's economic growth - privately admit that they have experienced racism.

When one African judge told a taxi driver she worked at one of the international courts, he asked her if she was the cleaner, the judge told Reuters. Another senior court official said she spent months trying to find a place to live when she first arrived.

"Each time they saw it was an African, I was told the apartment was not available any more," she said.

Polls show that the main opposition in the Netherlands to the tradition of Black Pete is in cosmopolitan Amsterdam. The local council in the southeast part of the city, where many immigrants live, voted to ban the festivities this year.

But the majority still want Black Pete. In a survey by pollster Maurice De Hond last month, 91 percent of a representative sample of Dutch people said the tradition should not be changed to suit the tastes of a minority, and 81 percent thought it would be unacceptable to turn Pete another colour.

Rutte said the debate was inevitable and healthy given the number of immigrants now in the Netherlands.

"It's unavoidable that when you have a huge inflow of people then you get tensions," he said. "Initial reactions from society are for no big changes at the moment ... (but) traditions can change over time."

But many Dutch eyes have been opened, Gario said.

"People are starting to realise that some people here are staunchly, obtusely racist." (Editing by Anthony Deutsch and Sonya Hepinstall) 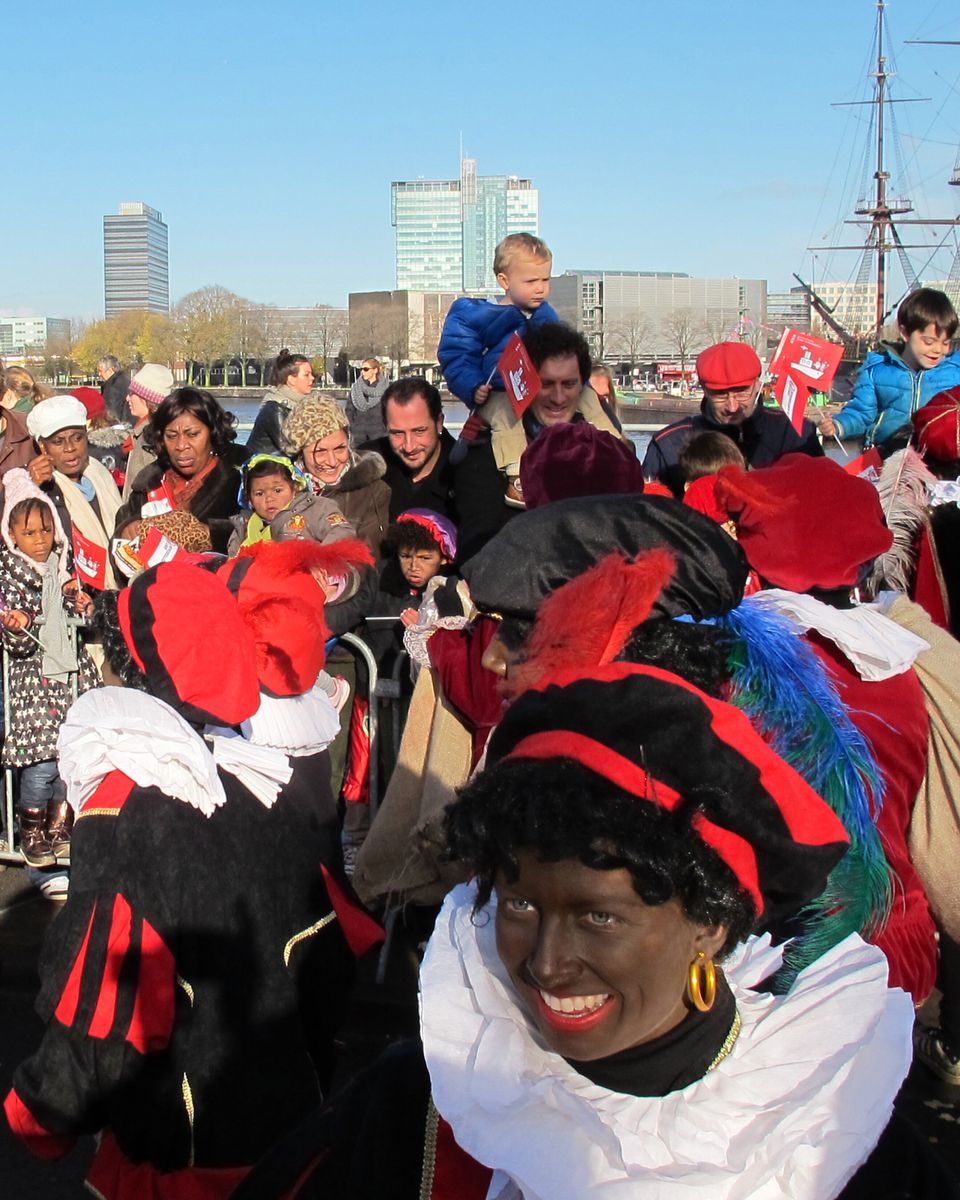