A Christian school in the Netherlands, Pieter Zandt Scholengemeenschap, was horrified to find an allegedly satanic symbol in its latest student agenda, asking parents and students to return the planners for shredding.

School board chairman Johan van Puten told Dutch newspaper Trouw that a Google search revealed that the peace sign allegedly contains a Nero cross, which was used in Roman times to represent the torture of Christians, and now apparently has Satanist connotations. It also has connotations with Nazism, as the Teach Peace Foundation writes that it was used as the symbol for Hitler's 3rd Panzer Division.

Blog Goedgelovig reported that in order to prevent students from using inappropriate planners, Pieter Zandt requires all students to use the official, school-published agenda, though it allows for some creativity by allowing a few students to design it each year. They added tips, jokes, quotes from scripture, and pictures, but now it seems their work was in vain.

The offending page with the picture of the six students who produced the agenda. The boy sitting second from the left is wearing a light blue shirt with a peace sign.

A translation provided by Dutch News reported that van Puten made the decision to destroy the organizers, costing him $20,000, because of the flood of letters that he received from parents against the sign. "The conviction of the parents that the symbol was unacceptable was so strong that I knew a rigorous approach was the only solution," he said.

The school addressed the issue on its website, and also sent a letter to parents requesting them to bring back the planners. They referenced the Satanic, Nazi, and anti-Christian associations of the peace sign and apologized for the waste of paper. Raw Story reported, "This is the Nero cross that stood in Roman times for the prosecution, torture and killing of Christians. Even this symbol in our time been associated with occultism," wrote van Puten. 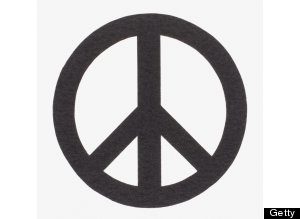 The peace sign was really designed in 1958 by British artist Gerald Holtom for the Campaign for Nuclear Disarmament (CND), which was having its first major march in England. Holtom explained that the symbol superimposed the semaphore letters "N" and "D" over each other.

The 3,000 student-created agendas are now headed to the shredder, and the new ones will be "purely functional."