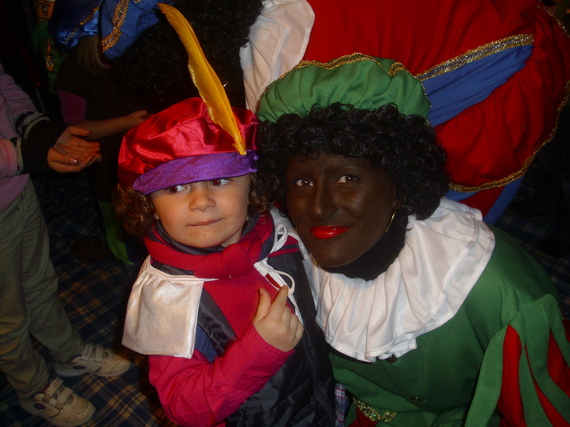 I remember them (sometimes there were dozens of them) running and clowning around with their burlap sacks -- scaring the daylights out of some little kids might be a better term -- in parades, shopping centers and, as legend had it, coming down the chimney while you were sleeping.

One or more Zwarte Pieten would accompany and help Sinterklaas -- named after a 4th century bishop, Saint Nicholas, the Dutch rendition of our Santa Claus -- make his rounds the days before and on Sinterklaas Day, December 5.

That was, and continues to be, the day when Dutch kids received most of their Christmas presents, if they had been good or a lump of coal, or worse -- more on this later -- if they had been naughty.

I use the past tense because this was 60 years ago and some of the traditions and stories surrounding the Zwarte Pieten may have changed.

But who are these Zwarte Pieten, and what do they do?

Again going back 60 years, Zwarte Pieten were white adolescents with painted black faces (supposedly from the soot picked up scaling down all those chimneys), thick, painted-on, bright-red lips, lots of frizzy black hair, many other "ornaments" such as big gold hoop earrings -- and beautiful Dutch blue or green eyes. (No colored contact lenses in those days.)

They were Sinterklaas' knechten (servants) -- slaves, according to some -- who would help Sinterklaas deliver sweets and gifts to kids who had behaved throughout the year and would only leave a lump of coal for those children who had not been very nice. Legend and rumor also had it in those days that they would stuff kids who had been "naughty and bad" into their burlap sacks and haul them back to Spain, or Morocco, or Turkey or wherever current folklore had it that the Zwarte Pieten came from.

As I mentioned, I was 10 or more in my Sinterklaas days and although somewhat nervous around Zwarte Pieten I was not really scared.

However, looking back, I can imagine how mortified some of the "naughty" 4- or 5-year-olds must have been around Sinterklaas day.

In those days there were no racial connotations, implications or complaints that I remember about Zwarte Piet.

A huge controversy has been brewing the last couple of years in the Netherlands surrounding the propriety in today's society of having these blackface, white minstrel-like Zwarte Pieten still going around enchanting some, scaring others, all in the name of Sinterklaas.

The controversy seems to be raging the most in Amsterdam.

Last year, Amsterdam received 21 official complaints about the traditional Sinterklaas parade citing the racist characteristics of Zwarte Piet and asking the city council to deny a permit for the parade. Amsterdam's mayor, Eberhard van der Laan, wrote in a letter to the municipal council that while he supports a "less black and less servile" Pete, he deemed the complaints against the parade to be unfounded. And the parade went on.

Last fall, even the United Nations got involved in the controversy when its human rights body allegedly opened up an investigation into whether Zwarte Piet is a "racist stereotype" and "infringes the human rights" of black people.

The Telegraph reported, "It has emerged that the UN's high commission for human rights has written to the Dutch government expressing concerns over the tradition and accusing the authorities of failing to react to complaints of racial discrimination."

But a few days later, a UNESCO official assured Holland that "the Dutch tradition of Santa Claus and his blacked-up servant, Black Pete, is safe from United Nations interference," according to the Telegraph. The UN consultant who had started "all the hoopla" had "abused the name of the UN to bring their own agenda to the media," Marc Jacobs, a Belgian UNESCO representative told the Algemeen Dagblad newspaper.

Then, last week, an Amsterdam court ruled that Holland's Zwarte Piet tradition is offensive to black people, perpetuates a negative stereotype of black people and gave the mayor of Amsterdam six weeks to decide whether or not he would hold the city's annual Sinterklaas parade.

The court said Thursday that Black Pete's appearance, in combination with the fact that he is often portrayed as dumb and servile, makes it "a negative stereotype of black people."

It also cited a publication by the country's national human rights commission this week that found that white Dutch leaders frequently react with "irritation and dismissal" when questions of racism are raised, even though workplace discrimination is well documented in the Netherlands.

On Friday, the U.N. commission that has been investigating this issue -- Verene Shepherd who last year criticized the Zwarte Piet tradition is a member -- presented its "preliminary findings" at a press conference, including suggestions from Shepherd that many Dutch lack an understanding of the Netherlands' colonial past, and that such a lack of knowledge "feeds racism and intolerance," according to NOS, the Netherlands' largest news organization.

Many Dutch see this custom as the continuation of a beloved and innocent holiday tradition and point to the historic tolerant nature of the Dutch toward minorities.

But times, culture and demographics have changed.

Dutch relatives and friends tell me that little kids today are no longer afraid of Zwarte Piet, but rather enjoy their antics. But I also read that Dutch minorities take offense to the Zwarte Piet blackface tradition. Today, there are more minorities in the Netherlands than were there in the '50s, including about half a million with Surinamese or former Dutch Antilles' heritage.

The Dutch are very pragmatic (and tolerant) people and I am sure they will sensibly debate this custom before it evolves from inadvertent offensiveness into knowing and stubborn stereotyping of black people.

As a reader of this story commented elsewhere, "I'm sure the spirit of Christmas will remain lush and wonderful in the Netherlands without Black Pete."