Because of his fondness of conspiracies and selective presentations of fact in his narrative movies (sorry Doors fans, they weren't going to play Woodstock anyway), it's easy to pigeonhole Oliver Stone as a loon with a camera. 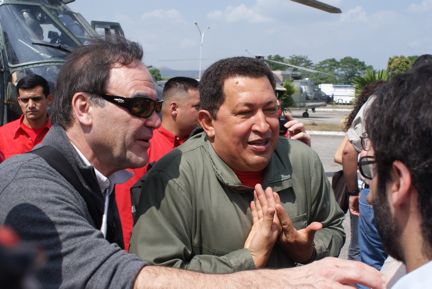 At his best, however, Stone can help viewers discover viable alternatives to the official versions of history and current events. Much of the recent coverage of South America in our domestic media has been superficial and shoddy. So his recent documentary South of the Border offers a perspective that is occasionally enlightening and often convincing. It's also refreshing to see Stone demonstrating a much-needed sense of humor.

The new film examines Venezuelan President Hugo Chávez's rise to power and how it has influenced the rest of the continent. While Stone emerges an unabashed admirer, he presents Chávez in a more nuanced light than he's usually been portrayed in the north. Outlets like Fox News, CNN and the New York Times in fits of hysteria have likened Chávez to Hitler, so Stone's fawning take actually seems saner in comparison.

Stone contrasts his own face-to-face interviews with Chávez and other South American heads of state with frantic coverage from Fox News and other sources. The film opens with a clip from Fox and Friends where the hosts confuse coca with cocoa. It becomes difficult to take the vitriolic hyperbole about Chávez and his protégés after hearing a fumble like that.

At least the director acknowledges that Chávez, a former lieutenant colonel in the Venezuelan army, once tried an unsuccessful coup almost a decade before he was elected to power. He also includes a warning from former Argentinean President Nestor Kirchner, who while supportive of Chávez, says that absolute power could undermine any good he's done.

Having survived a coup attempt against his own regime, Chávez's reign has inspired a type of domino theory in other South American countries. Whereas many of previous leaders for nations like Bolivia and Paraguay have been white oligarchs, the new president's like Bolivia's Evo Morales more closely resemble the majority indigenous residents who live there. One interesting revelation that Stone includes is that Morales' blue-blooded predecessor barely spoke Spanish, which helps explain why Morales and politicians of his ilk have come to power.

While Chávez has posed with several U.S. enemies like Iran's Mahmoud Ahmadinejad and has thumbed his nose at International Monetary Fund policies, which often do little to help the people in the countries indebted to the organization, the movement Chávez represents isn't necessarily anti-American. Rafael Correa, the current president of Ecuador, was actually educated here.

Stone freely mingles with the leaders he's interviewing, which is both a strength and a drawback for the film. Watching Chávez riding a villager's bike and then accidentally breaking it makes him seem like neither a Bolivarian hero nor a totalitarian monster.

In one jaw-dropping sequence, Morales demonstrates to Stone how to properly chew coca leaves. According to Stone, the raw leaves aren't nearly as potent as processed cocaine but can be useful in getting through life in high altitude places like Bolivian capital La Paz. Considering his public remarks about drug use, Stone probably knows what he's talking about.

At times, it's easy to wonder if Stone is making the opposite mistake of the journalists he criticizes. While Morales' skill with a soccer ball is impressive, one wonders if a more thorough examination of why the president's detractors want him out of power might have been more edifying.

The DVD features additional, extended interviews and a couple of conversations local journalists have had with Stone. While Stone's detractors have made their case against him and the film in numerous postings on this site, South of the Border is worth a look because he has a genuine curiosity about both the leaders he profiles and the countries under their rule. If these folks care half as much for their citizens as they say they do, they might provide an example for our own politicians.