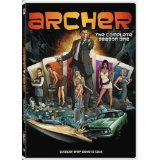 ARCHER SEASON ONE (Fox; $29.98) -- Let me put my cards on the table: the animated, raunchy, very adult spy show Archer is the funniest sitcom on TV. You can catch up with the first 10 episodes right now. Season two starts January 27 at 10 p.m. on fx. Either way, you'll enjoy the savviest voice cast on TV, including Jessica Walter and (sometimes) Jeffrey Tambor from Arrested Development, the hilarious Aisha Tyler and Chris Parnell and above all the drolly deadpan H. Jon Benjamin as the drunken, sexist, lazy but somehow effective field agent Sterling Archer aka "Duchess." It's basically a work place comedy given a new spin by having the work place be a for-hire spy agency and our Matt Helm-like hero having to endure his overbearing boss, also known as his mother. The sexual gags are very explicit so this is not for people who find South Park crass. But if your taste runs a little blue, you're gonna love this show, which is wildly quotable and -- thanks to Benjamin and Tyler -- features the sexiest, funniest duo on TV since Dave and Maddie sparred on Moonlighting. Yep, I'm a fan. 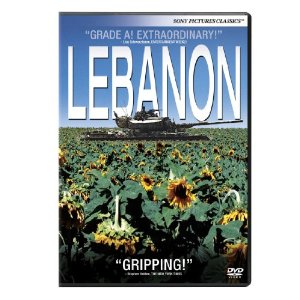 LEBANON ($38.96 BluRay or $28.95 regular DVD; Sony) -- The top winner at Venice, I was really looking forward to Lebanon, a film about the Israeli invasion of Lebanon as seen through the eyes of soldiers in one tank headed into enemy territory. I thought it might be a corker a la Das Boot. And while it's true I've never actually seen a film about an Israeli tank crew, the movie proved unfortunately familiar. Actually, it came across like a play, thanks to the movie being set almost entirely inside the tank, with glimpses of the outside world coming through the viewfinder. The crew is the usual grab-bag of types, from the military regular to the raw recruit to the nervous gunner and the cynical weapons loader who always questions everything. These are the nicest soldiers imaginable: they are wary of using their weapons for fear of hurting civilians to the point of rebellion, discuss everything (even though the leader tries to shortchange this), try and protect a prisoner from a suspicious "ally" who wants to torture and probably kill the guy and even place a call to one of the guys' mother to assure her he's ok. No points for guessing which one of them doesn't make it. 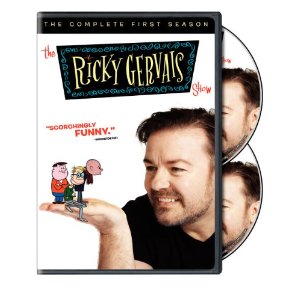 THE RICKY GERVAIS SHOW SEASON ONE ($29.98; Warner Bros.) -- What a scandal! Ricky Gervais was cheeky last year at the Golden Globes. He promised to be even more insulting this year because he never planned to do it again. And then...he was even more insulting and cheeky this year! What nerve! Oh how he blindsided them. What...what CHEEK! And what exactly did they expect? The only thing cheekier would be to take one of the most successful podcasts of all time and then lazily -- yes lazily, you heard me right, Mr. Gervais -- repurpose it into an animated series. Gervais doesn't have to actually do any work and because the animators sometimes visualize some of the nutty asides of the three hosts, Gervais can actually pretend it's worth listening to again. And, oddly, amusingly, it is. What a bastard. 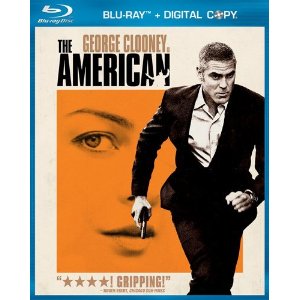 THE AMERICAN ($39.98 BluRay or $29.98 regular DVD; Universal) -- Some complained about the marketing of this film. Universal sold it as a thinking man's action flick, with George Clooney as our provocative hero (a man who builds custom-made guns for assassins). But what would you have done? Sold it as an unsuccessful, dull arthouse film? Of course not. Anton Corbijn follows up Control with this less-satisfying but no less ambitious tale which plays like a European art film, studying the lonely and isolated Clooney as he holes up in a small town, beds a local prostitute (who is of course gorgeous enough to be a runway model) and maybe, perhaps falls in love while he strives (not unreasonably) to avoid being killed. Made with good intentions all around but the screenplay's cliches let it down. I would point out one very clever touch I hope becomes standard on all titles, and not just some BluRays. This offers uHear, which lets the film jump back about five or so seconds and briefly turns on the English subtitles. That way, if a line of dialogue is muddied or hard to hear, you can catch it quickly without having to laboriously go through the steps of turning the subtitle function on and off. Well done! 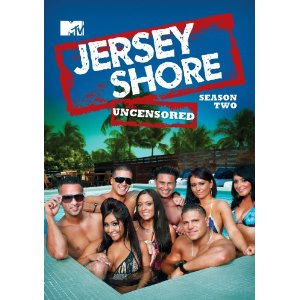 JERSEY SHORE SEASON TWO UNCENSORED ($29.99; MTV/Paramount) -- It's not the end of the world. But you'll wish it were. 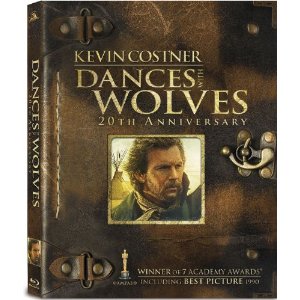 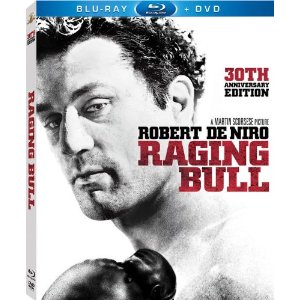 DANCES WITH WOLVES 20TH ANNIVERSARY EDITION/RAGING BULL 30TH ANNIVERSARY EDITION ($29.99 each on BluRay; MGM) -- They came out a decade apart but these films are weirdly linked in my mind. Raging Bull's loss to Ordinary People is considered one of the Academy Award's greatest blunders. Personally, I will defend to the death the excellent film by Robert Redford, which is no embarrassment as an Oscar winner. However, Scorsese's film and Robert DeNiro's towering performance do loom over it and indeed most other movies. It looks amazing on BluRay and of course features some all-new extras. Dances With Wolves is in some quarters considered another major Oscar blunder for keeping Scorsese's GoodFellas from winning Best Picture in 1990. Again, I considered both movies among the best of that year, so won't call it a shonda. But yes, GoodFellas is the other masterpiece by Scorsese (along with The Last Waltz) and is a tremendous film. Dances looks and sounds good but unfortunately they do the film no favors by ONLY including the near 4 hour director's cut. Whatever you think of each version (and the four hour director's cut is a slog, in my opinion), fans should never have to choose. You should always include both the theatrical version and any extended cut option on the same disc. Even if you don't, you certainly should make both available. Putting out only the director's cut instead of the substantially different version that was a worldwide smash and swept the Oscars cheats everyone, including Kevin Costner. 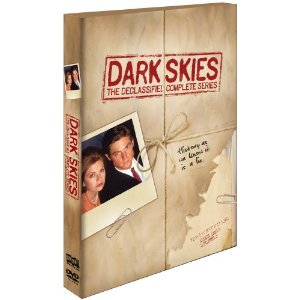 DARK SKIES COMPLETE SERIES ($44.99; Shout) -- One of the great side effects of The X-Files was that it allowed other networks to gamble on smart, wildly ambitious shows like this one. Almost forgotten, it's been given a loving boxed set by Shout, which collects the entire show (including the international version of the pilot) and loads of extras. How's this for paranoid conspiracy theories: much of our post-war history is a lie meant to cover up a threatened alien invasion and everyone (I do mean everyone) is in on it. Our heroes are two young idealistic people who head to Camelot (I mean JFK's DC), one ot work for a Congressman and the other to work for Jackie. They're soon on the run when they uncover this massive conspiracy. Hitting the road, they investigate every odd happening of the Sixties (which means they're very busy) while the conspiracy grows and grows and grows. (Vietnam? Just an excuse for the alien fighters to get more funding.) I've only watched the pilot so far but the show is great fun and you can always judge a series by its cast: Eric Close, Megan Ward and Jeri Lynn Ryan are just some of the names it can boast of. Nicely done all around. (Note: I can't speak to whether the set maintains all the original music cues used when the show first aired.) 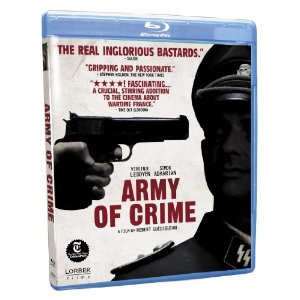 ARMY OF CRIME ($34.95 BluRay or $29.95 regular DVD; Lorber) -- A French film about the Resistance directed by Robert Guediguian. It's based on the true story of the Manouchians -- 30 or so French patriots who wrecked havoc for a while on the Nazis in their midst only to be rounded up and summarily shot. The film could serve as a master class for the obvious. It begins with a voice over naming the names of each beloved patriot. When something tragic happens, classical music is certain to swell on the soundtrack. Or things move in slow motion. Or they move in slow motion AND the classical music swells. And the roll call is repeated at the end. It's always fun to see the Nazis get outwitted. (Sorry, Germany.) And the Manouchians, as portrayed in this film, at least, are certainly the best-looking members of the Resistance imaginable. Thomas Elek (played by Gregoire Leprince-Ringuet) is called a "dirty Yid" by a fellow student but surely the guy is just jealous of how handsome Elek is. Few movies embody the idea of "pedestrian" more perfectly. 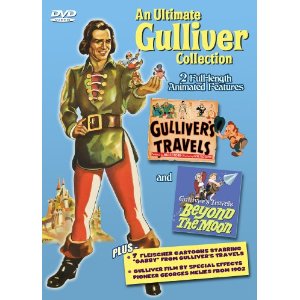 AN ULTIMATE GULLIVER COLLECTON ($15.99; American Pop/Virgil) -- An unintended but happy consequence of the ill-fated Jack Black spin on Gulliver's Travels is this jam-packed DVD. The picture quality is just so-so. Frankly, the animated 1939 Gulliver's Travels at the heart of the set will probably never be properly restored, despite its significance in animation history. But this DVD is admirably bursting with items and certainly makes up in quantity what it lacks in superior image quality. You get the okay Fleischer film (the first full-length animated feature after Disney's Snow White and an innovator in the never-quite-successful strategy of rotoscoping (which involves filming actors and then animating over their movements). But you also get seven animated shorts starring Gabby, a character in the film that the Fleischers spun off into a string of shorts. And you get a 1965 Japanese anime spin-off of the Swift character called Gulliver's Travels Beyond The Moon. AND to top it off you get a Melies short from 1902 called - rather laboriously -- Gulliver's Travels Among The Lilliputians and the Giants. For hardcore animation buffs, this is a low-budget treat.