In March of 2015, NASA's Dawn mission will arrive at the dwarf planet Ceres, the first of the smaller class of planets to be discovered and the closest to Earth.

The dwarf planet Ceres, which orbits the sun in the asteroid belt between Mars and Jupiter, is a unique body in the solar system, bearing many similarities to Jupiter's moon Europa and Saturn's moon Enceladus, both considered to be potential sources for harboring life.

"I think of Ceres actually as a game changer in the solar system," Schmidt said.

"Ceres is arguably the only one of its kind." 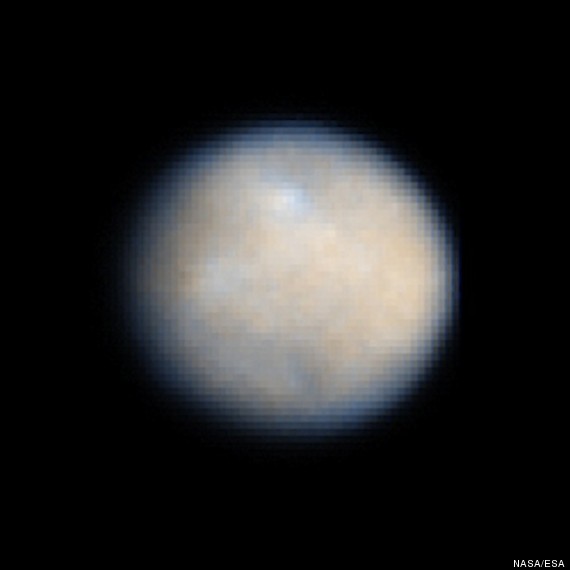 The dwarf planet Ceres as seen by the Hubble Space Telescope.

When Ceres was discovered in 1801, astronomers first classified it as a planet. The massive body traveled between Mars and Jupiter, where scientists had mathematically predicted a planet should lie. Further observations revealed that a number of small bodies littered the region, and Ceres was downgraded to just another asteroid within the asteroid belt. It wasn't until Pluto was classified as a dwarf planet in 2006 that Ceres was upgraded to the same level.

Ceres is the most massive body in the asteroid belt, and larger than some of the icy moons scientists consider ideal for hosting life. It is twice the size of Enceladus, Saturn's geyser-spouting moon that may hide liquid water beneath its surface.

Unlike other asteroids, the Texas-sized Ceres has a perfectly rounded shape that hints toward its origins.

"The fact that Ceres is so round tells us that it almost certainly had to form in the early solar system," Schmidt said. She explained that a later formation would have created a less rounded shape.

The shape of the dwarf planet, combined with its size and total mass, reveal a body of incredibly low density.

"Underneath this dusty, dirty, clay-type surface, we think that Ceres might be icy," Schmidt said. "It could potentially have had an ocean at one point in its history."

"The difference between Ceres and other icy bodies [in the solar system] is that it's the closest to the sun," Castillo-Rogez said.

Less than three times as far as Earth from the sun, Ceres is close enough to feel the warmth of the star, allowing ice to melt and reform.

Investigating the interior of the dwarf planet could provide insight into the early solar system, especially locations where water and other volatiles might have existed.

"Ceres is like the gatekeeper to the history of water in the middle solar system," Schmidt said. 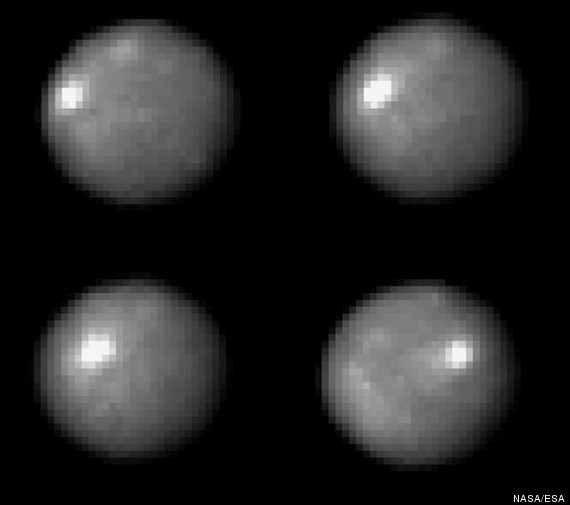 Ceres rotates about once every nine hours.

As large as Ceres is, its distance has made it a challenge to study from Earth. Images taken by the space-based Hubble Space Telescope provided some insight to its surface, but to be sighted, features could be no larger than 25 kilometers (15.5 miles) in diameter.

Several round circular spots mar the terrain, features which Schmidt said could be any one of a number of geologic terrains, including potentially impact basins or chaos terrains similar to those found on Europa. The largest of these, named Piazzi in honor of the dwarf planet's discoverer, has a diameter of about 250 km (155 miles). If this feature is an impact basin, it would have been formed by an object approximately 25 km (15.5 miles) in size.

But for Schmidt, this is another possible indication about the dwarf planet's surface.

"It doesn't mean that Ceres hasn't been hit by something bigger than 25 kilometers," she said. "It just means that whatever is going on on Ceres has totally erased [the topographic signature of that event]."

Ceres may have suffered major impacts, especially during periods of heavy bombardment early in the solar system's history. If the surface contained ice, however, those features may have been erased.

Telescopes on Earth have also been able to study the light reflecting from the planet and read its spectra.

"The spectrum is telling you that water has been involved in the creation of materials on the surface," Schmidt said.

The spectrum indicates that water is bound up in the material on the surface of Ceres, forming a clay. Schmidt compared it to the recent talk of minerals found by NASA's Curiosity on the surface of Mars. [The Search for Life on Mars (A Photo Timeline)]

"[Water is] literally bathing the surface of Ceres," she said.

In addition, astronomers have found evidence of carbonates, minerals that form in a process involving water and heat. Carbonates are often produced by living processes.

A prime site for life?

Water is considered a necessary ingredient for the evolution of life as we know it. Planets that may have once contained water, such as Mars, as well as moons that could contain it today, like Enceladus and Europa, are all thought to be ideal for hosting or having once hosted life.

Because of its size and closeness, Schmidt calls Ceres "arguably more interesting than some of these icy satellites."

"If it's icy, it had to have an ocean at some point in time," she said.

Castillo-Rogez compared Earth, Europa, and Ceres, and found that the dwarf planet bore many similarities to Earth, perhaps more than Jupiter's icy moon. Both Earth and Ceres use the Sun as a key heat source, while Europa takes its heat from its tidal interaction with Jupiter. In addition, the surface temperature of the dwarf planet averages 130 to 200 degrees Kelvin, compared to Earth's 300 K, while Europa is a frosty 50 to 110 K.

"At least at the equator where the surface is warmer, Ceres could have preserved a liquid of sorts," Castillo-Rogez said.

Liquid water could exist at other points on the dwarf planet known as cold traps, shadowed areas where frozen water could remain on the surface. Such icy puddles have been found on Earth's moon. [Photos: Europa, Mysterious, Icy Moon of Jupiter]

"The chemistry, thermal activity, the heat source, and the prospect for convection within the ice shell are the key ones that make us think that Ceres could have been habitable at least at some point in its history," Castillo-Rogez said.

The future of Ceres

As scientists develop more information about Europa and Enceladus, there has been a greater call to investigate the two prime sites for life. But Schmidt and Castillo-Rogez think that Ceres could also be a great boon for astrobiology and space exploration.

"It's not a difficult environment to investigate," she said. "As we think about the future of landed missions for people and rovers, why not go to Ceres?" 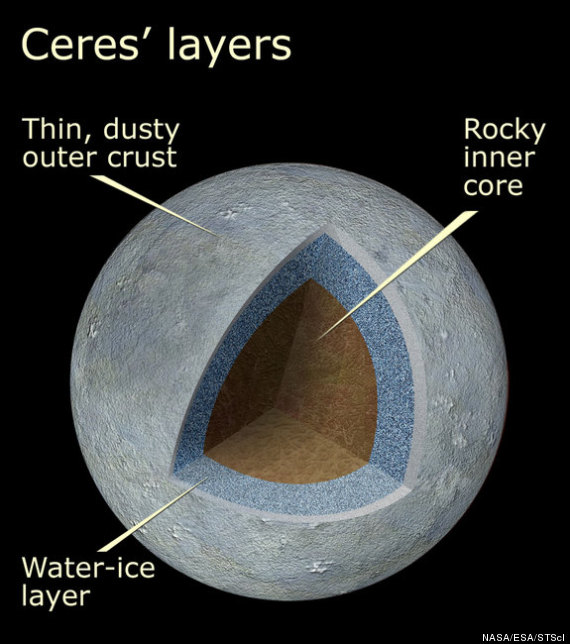 Ceres is thought to contain a thin outer layer of dust and rock over an icy layer.

Though it would be more challenging to drill into than Europa, which boasts an icy surface layer, the dwarf planet would make a great site to rove around on. Schmidt also noted that it could make a great launching point when it comes to reaching the outer solar system. Its smaller mass would make it easier to land on — and leave — than Mars, which could make it a good site for manned missions.

"In this kind of special place in the solar system, we have a very unique object that might be telling us a lot about what we don't know about building a habitable planet."

NASA's Dawn mission launched September 27, 2007. It traveled to the asteroid Vesta, where it remained in orbit from July 2011 to July 2012 before heading to Ceres. It is slated to spend five months studying the dwarf planet, though Schmidt expressed hope that the craft would continue working beyond the nominal mission, allowing the team to study the icy body even longer.

Castillo-Rogez pointed out that not only will Dawn reach Ceres in 2015, the European Space Agency's Rosetta spacecraft will be escorting the comet Churyumov-Gerasimenko around the sun that year, while NASA's New Horizons mission will be reaching Pluto and its moon Charon.

"'15 is going to be a great year for icy bodies," Castillo-Rogez said.

"I think when we get to Ceres, it's just going to be an absolute game changer, a new window into the solar system that we wouldn't have without going there," Schmidt said.