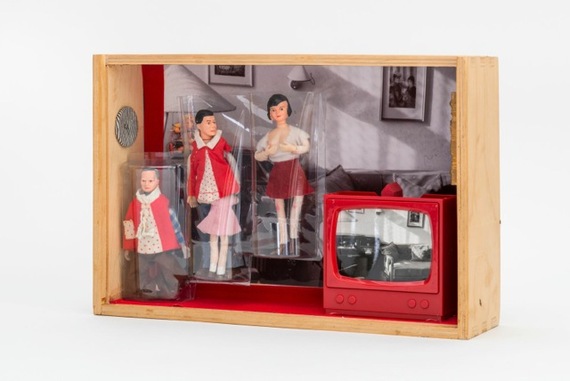 The diorama box recalls that most universal of middle school assignments -- to build a model of the solar system, for example, or your family portrait, a book report, the signing of the Declaration. But for an adult such as mixed media assemblagist and painter Dwora Fried, this childlike (not to be confused with childish) exercise offers the perfect way to re-examine issues and memories surfacing from childhood as a personal matter, as well as to deconstruct the context of those experiences in a more historical or cultural mode. In Fried's quirky and unsettling diorama scenes, family dramas and generational traumas play out through arrangements of psychologically and culturally fraught found and collected objects and images, each with the power to contain and transmit both archetypal emotions and specific event memories, enhanced by the effects of her deft juxtapositions and gently surrealist economies of scale. 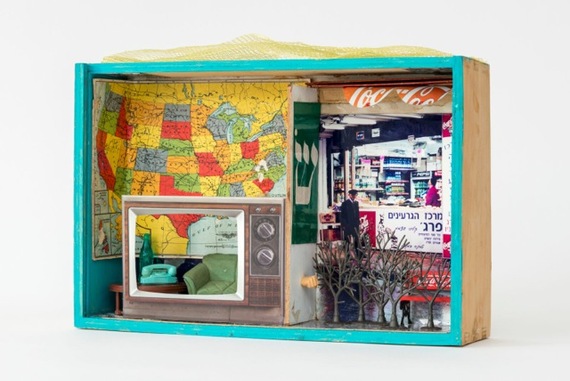 Walter Benjamin invoked the diorama as proof that the modern vision had "outgrown" painting; and Jean Baudrillard in his investigations of simulacra was fascinated by the psychological implications of the dimensional space and its hybridity of art and artifice, the more real than real, what Umberto Eco came to call the hyper-real. Both Baudrillard and Eco were somewhat skeptical of mankind's (and especially America's) apparently insatiable appetite for stimulation and spectacle, and its attendant preference for the illusion of reality over the actually real. It was Benjamin who, like Fried, saw in the additional attributes of constructed space and the backstories of repurposed objects all the more potential for the thorough, nuanced communication of artistic ideals and a perspective of interdependence between private and collective experiences. 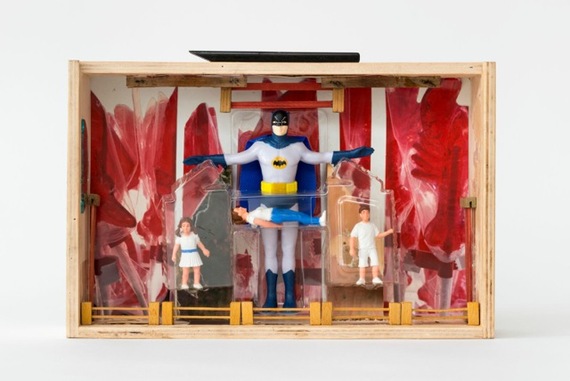 The diorama is in one sense an architecture of trapped emotion, inhabited by obvious stand-ins for human beings -- toys, figurines, mannequin parts. For Fried, the form provided a therapeutic method for approaching tricky psychological territory having to do with events in her family set in motion during the Holocaust, in Vienna where her people are from. Fried's mother was a girl of eleven when it started, and though she survived and went on to have a family of her own, for her daughter Dwora, the sublimated trauma her mother survived lingered long enough to ice out her own childhood decades later, an innocence lost to the fogs of absence, and the shadows of questions that will never get answered. Though undertaken as a sincere attempt to work through some of this thorny material as a personal matter, Fried cannot help but be aware and engaged with the fact that her entire generation had versions of this experience, and that like her, those repercussions continue to be felt right through to the children and grandchildren of survivors to this day. 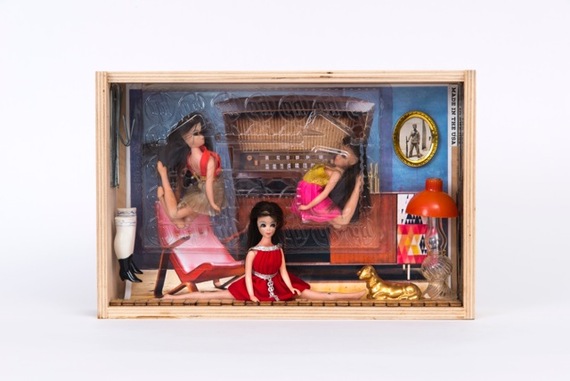 So while her boxes each tell certain very specific personal stories -- things she wants to tell you but does not really want you to know -- about old Vienna, her family, her children, her struggles, theirs. Part of the charm of found objects is that because they belong to the world, they leave room for stories they evoke that are also yours, mine, and society's, belonging to art, history, and the zeitgeist of this and other eras.
As she has gradually worked her way through her central core issues and either found meaning or made her peace with meaning's absence, a certain increased narrative and symbolic ambiguity is becoming visible in her latest work. It is a sign of personal and artistic progress and confidence, intention rather than exegesis, and with more room to include fresh ideas from the rest of the world. Getting away from processing her childhood pain and loss and now living and working increasingly in the present, gives her access to ideas, images, and objects with pop cultural themes, memes, and wittiness. In these new narratives Vienna is still and always with her; but now as it relates to her own children, and her role as a parent as well as an erstwhile child. 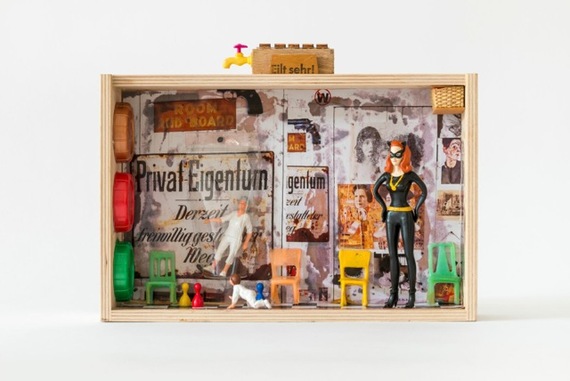 Working at the customary intimate scale, Fried is able to choreograph all manner of visual illusion and believable surrealism from within the world of toys, miniatures, and the conventionally understood assemblage artist's lexicon. For example, using the injection molded clear plastic shells of toy packaging to trap figures literally in a pictorial sense within the composition, generating light refraction within her tiny architecture that sparkles and obscures like resin or varnish does on paintings as light bounces around inside it; with the double entendre of keeping the figures both together and separate in individual bubbles of consciousness, such as might speak to the uneasy dynamic of a tense evening en famille. 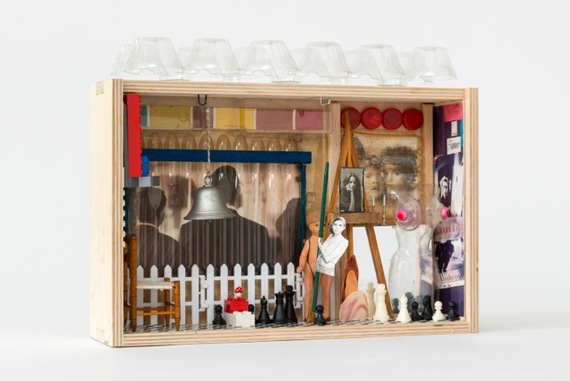 This kind of metonymical, physically expressed metaphor, is a special attribute of the whole assemblage and diorama genre. But how does this dual functionality respond to an increase in scale? Fried is making a life-size box for her next exhibition, and this both allows and requires the inclusion of real objects at their customary scale and therefore in their expected usage -- such as the full-size mannequins that recall Jake and Dinos Chapman or Ed and Nancy Kienholz more than school assignments and toy chests; and the empty school chair inside its walls which viewers are invited to sit feel, as Fried says, "what it's like to be me for a while." In a way, this move from small to large turns the artist's comfort level into a new set of challenges and a new way of communicating ideas through direct experience more than language or symbol. It seems notable that Fried's one-time dream, while still a child in Vienna, was to design sets for the Opera. What she might not have guessed is that she and her family would also be the stars of the show. 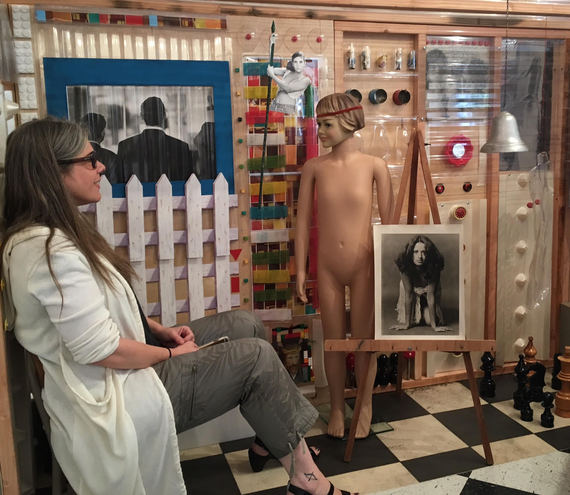