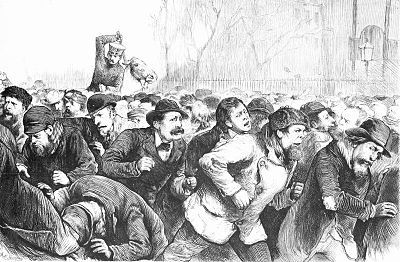 Work can be sickening. Literally.

In a riveting appearance at the recent Great Place to Work annual conference, Stanford business school professor Jeffrey Pfeffer presented a devastating case for the negative effects of U.S. workplaces on our health.

Pointing out that human sustainability ought to be at least as important a goal as environmental sustainability, Pfeffer described bad work environments as environmental hazards, as dangerous or even more so than carbon emissions or second-hand smoke. In fact, they may well be one of the causes for the notoriously high cost of healthcare in this country.

Pfeffer backed up this stunning assertion with some pretty strong data. Here are just a few facts from his presentation:

As Pfeffer pointed out, as countries get richer, they tend to address environmental hazards that affect health: they clean up their water, they clean up their air. And, that, in fact, is what we see in the United States, as well as in other advanced industrialized nations. The percentage of healthcare costs associated with a slew of environmental hazards has gone down--except in the case of unhealthy workplaces. Here, the U.S. is a total outlier.

Pfeffer's research suggests that European countries have, on average, a 22.4 percent lower fraction of overall healthcare costs stemming from unhealthy workplace practices than we do here in the United States. Which means the U.S. could save $42 billion in healthcare costs simply by emulating the workplace practices of the average European country. Never mind emulating those of the most enlightened (in workplace terms) European countries, which he identifies as France, Denmark and Slovenia--that path would lead to a savings of $66.5 billion.

All told, Pfeffer has weighed the research and come to the conclusion that the environmental hazard he calls an "unhealthy workplace" is responsible for approximately 125,000 excess deaths and $130 billion in excess costs in the United States each year.

And, by the way, the solution to this horror is not workplace wellness programs, which Pfeffer sees as a fairly worthless band-aid applied to a self-inflicted wound.

No, the solution is simply (ok, not so simply) the flip side of his data: It's providing more job control, reducing work-family conflict, being fair to employees and providing social support at work. It's also avoiding lay-offs; Pfeffer quotes evidence that while layoffs "increase fear and stress, they do not lead to higher profits, productivity, stock price, innovation or quality."

So, should companies all pitch in to cut the price of health care in this country and (by the way) stop killing people, simply because they care? Well, that would be nice, but it's not necessary. As is so often the case when we talk about great workplaces, it's not a matter of choosing between doing good and doing well.

All of these things we're talking about: greater control over work, reduction of work-life conflict, perception of institutional justice, a supportive environment--all of these have been shown to reduce turnover, attract strong employees, increase engagement, increase productivity, reduce absenteeism--you name it. (As just one bit of evidence for this, companies on the Great Place to Work list--aka Fortune's "100 Best Companies to Work For"--consistently outperform other companies on a range of measures, including the stock market.)

Which means we are dying for no good reason--and it's costing us a bundle. Open wide, America! It's time to take your medicine.

Robin Hardman is a writer and work-life expert who works with companies to put together the best possible "great place to work" competition entries and creates compelling, easy-to-read benefits, HR, diversity and general-topic employee communications. Find her and follow her blog at www.robinhardman.com.