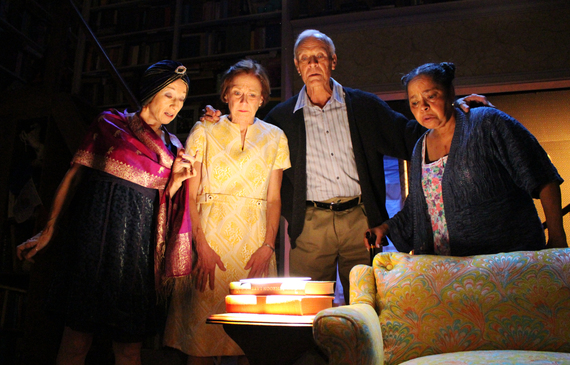 A widower who has retreated from life. An innocent who performs good works of dubious usefulness. An eternal traveler sampling philosophies to feed her spiritual hunger. Fraught family dynamics enliven The Hummingbird's Tour, a decidedly Southern comedy in which three very different siblings confront their own mortality -- and that of their beloved childhood nanny -- upon the arrival of a stranger who may be an otherworldly messenger from the beyond.

Playwright Margaret Dulaney and director John Augustine came into Manhattan from Pennsylvania -- where Dulaney lives with her husband of more than 30 years, musician Matt Balitsaris, and Augustine lives with his partner of nearly as long, playwright Christopher Durang -- to talk life, death and comedy. 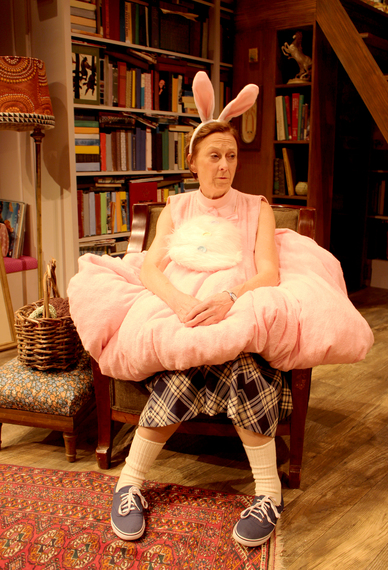 Working in theater takes bravery, facing that audience every night. What do you like best about directing?
JA: I have a lot of personalities, it seems. So as a director I get to use everything I do, my musical ability, my comic, my drama, my writing, my acting. It's fun for me to get to use all the parts of my personality...and not have to take medication for it.
It's its own medication. The ecstasy of creating. Do you ever experience agony while writing?
MD: If I didn't write I'd be in more agony. It's like visiting an old friend that I really love to visit. Since I've been working on this play I haven't been able to write, and I have really missed that old friend.
JA: I usually write little plays when I'm my most upset or angry or sad, but they come out funny. Usually my writing is an outlet of really being pissed off politically or emotionally or at some perceived injustice, [but] I can't say it to the person or to the world, so I figure I can have a character say this. I make it a woman or a different age person so it frees it for real expression. [I wrote a] tiny short play called Nicole and Jane about this narcissistic woman that verbalizes nonstop and her friend who she's not listening to who's grieving. And all my women friends, everybody thinks that they're Nicole. I had to confess, "Actually, I'm Nicole."
A sensitive person will see moments she recognizes, emotions that ring true, and worry she's a narcissist. A narcissist is not going to see it. "Oh, that character was so hilarious. You're so imaginative!"
JA: What I love about this play -- I think it would be really cool if she could get it published by, like, Playscripts, and then let it go out into the world. I think it could have a real life in theater outside of New York, because of the age of the actors and the tone. And there's no swearing, no nudity, no upsetting thoughts.
Unless you consider death upsetting.
JA: That's true. And people do, I guess.