"Five minutes of looking at these photos has done more to make me appreciate languages than anything I've ever seen or heard before," he said, after gazing upon a set of endangered scripts painstakingly carved into slabs of gleaming Vermont curly maple. The boards are part of an exhibition called "Endangered Alphabets: An Essay in Wood." (See slideshow below.) The history of the exhibit, along with stunning photographs of the boards themselves, is documented in Endangered Alphabets, a book by Tim Brookes, the creator of the carvings.

At first glance, this comment might not appear to be significant. But it certainly is when you consider the source -- my husband, who has been hearing about the importance of language preservation on a near-daily basis for almost a decade. The images of the carvings made a tremendous impact on him. More than the many documentaries on language loss (and revitalization) that I have sneaked onto the agenda for "movie night." More, even, than my passionate diatribes about how children of minority languages should be encouraged to appreciate their mother tongues.

But I had to agree with him. There is something about seeing an endangered script carved into an 18"x10" piece of wood that hits a person deeply. The carvings simultaneously convey that a tree has been cut down and that the language it bears is dying as well. Two commonplace but underappreciated forms of art -- one from man and one from nature -- merge to convey a vivid message. By looking at the boards, a person can appreciate these endangered languages instantly, at a glance, without even understanding the words engraved in the woods.

When asked why he chose to memorialize endangered languages in wood versus some other material, Brookes explains, "I originally chose wood because of its permanence, but also because it is so beautiful. Only after I got going did I start seeing wood as a kind of ancestor material: paper was originally made out of crushed mulberry bark, papyrus is a reed, many of the scripts in southeast Asia and Indonesia used palm leaves -- it seems as though wood is there in the background all the time, and carving in wood has a kind of primeval feel, almost mythic."

Brookes is a 58-year-old British-born author who lives in Burlington, Vermont and directs the writing program at nearby Champlain College. How did his project begin? "The whole thing came out of nowhere," he explains, half-joking that the only subjects he came close to failing in school were art and woodworking. All kidding aside, he believes his skill is owed in part to his mother, an avid woodcarver. As for the artistic side, Brookes claims, "The only thing that I can really draw is letters." He recalls how, in the '60s, he covered his notebooks with psychedelic lettering. As the author of 13 books, he has held a lifelong interest in language, writing, and letters.

Brookes describes the project with great humility, even good-natured self-deprecation. "At first, I was puzzled. To be honest, I thought this was a pre-senile hobby," he comments. "I was kind of surprised when people began to regard it as more than an eccentricity on my part." Indeed, not only did people regard it as something more than a pastime, but the carvings hit a nerve. Through a Kickstarter project, supporters from around the world began donating to help Brookes realize his vision of sending the boards on a world tour. The project raised nearly US$18,000.

When he first started the project, his purpose was more preservationist and documentarian in nature. The text he chose to use for the endangered languages was not just any old text,it was a message full of meaning: Article One from the Universal Declaration of Human Rights, drafted in 1948 at the foundation of the United Nations. The text was one of the only ones Brookes could find that was available in so many endangered scripts. "It's a resolute statement about inequality and the way people should treat each other," he comments. The full text of the declaration says: "All human beings are born free and equal in dignity and rights. They are endowed with reason and conscience and should act towards one another in a spirit of brotherhood." Brookes points out the deep irony in selecting this particular text, since the lack of people's respect for each other is a major reason why many of the scripts are endangered in the first place.

Nevertheless, as an ideal, these words are important, so Brookes memorialized them in Balinese, Bassa Vah, Baybayin, Bugis, Cherokee, Inuktitut, Khmer, Mandaic, Manchu, Nom, Pahauh Hmong, Samaritan, Syriac, and Tifinagh. Which scripts are his favorites? "Balinese is the most beautiful and graceful, to my eye," he explains, adding, "Dongpa is the most curious and thought-provoking, followed closely by Tifinagh -- really, every script has an extraordinary story behind it." Brookes devotes many pages to sharing the stories behind each of these scripts in his book.

How did he ensure good penmanship in so many different scripts? In the beginning, it had not occurred to Brookes that the translations of the declaration were actually written in Unicode fonts that had been created for these endangered languages. "I was essentially just a scribe, trying to copy it as exactly as possible," he explains. "I was terrified that if I got the slightest twist or curl a little bit wrong, it would say something horrendously obscene in the language." However, as time went on, he began to expand artistically beyond the confines of the fonts, paying more attention to the expressive qualities of the writing itself.

The boards took approximately 14 months to complete, and the first exhibition took place in May 2010. Since then, they have traveled from Wales to Wyoming, and have appeared at various colleges and libraries throughout New England. The exhibit will soon be on site at Yale, and Brookes has had recent inquiries about sending it to Thailand. He is already hard at work on his next project, a four-sided sculpture featuring a poem translated into many different languages with endangered scripts. However, he hopes that the first exhibit will continue to make its way around the world, bringing an important message with it wherever it goes: "One of my great ambitions for the exhibit is that it becomes a starting point for discussion on issues of cultural and language endangerment."

To learn about hosting the exhibit in your city, visit the website. To see the carvings and learn more about the project no matter where you happen to live, order a copy of the book. And, in the spirit of National Foreign Language Week (March 5-11), please take a moment to celebrate foreign languages, and to encourage others to do so as well. 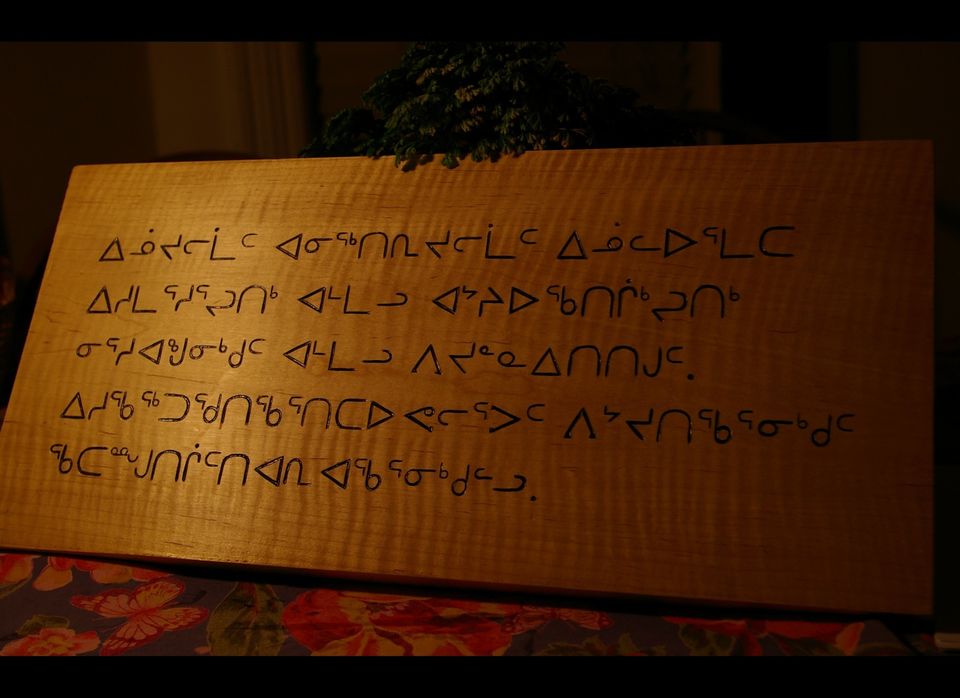 1 / 6
Inuktitut
“Letters are different from mathematical symbols and musical notes in that, when we’re writing them in the original way, by hand, they are modified by the act of using them,” writes Brookes in his chapter on the Inuktitut language. “Letters are a very special, possibly unique kind of symbol,” he says on Page 28 of his book, <em>Endangered Alphabets</em><a href="http://www.endangeredalphabets.com/?page_id=85" target="_hplink">http://www.endangeredalphabets.com/?page_id=85</a>. (Photo courtesy of Tim Brookes, Endangered Alphabets Project)