We arrive to Tucson's Southside Presbyterian Church at a few minutes to 7pm on a Tuesday. After being greeted by a robed monk and a few other participants, my friend and I take our seats for a meeting of the Samaritans, a "strictly volunteer" organization whose mission is to save the lives of migrants crossing the southern Arizona desert. The simple grace of the wooden-beamed hall is reflected in the focus and commitment of the people gathered there. They walk in the desert in groups of four almost every day offering humanitarian aid to migrants who may be sick, injured or dehydrated. 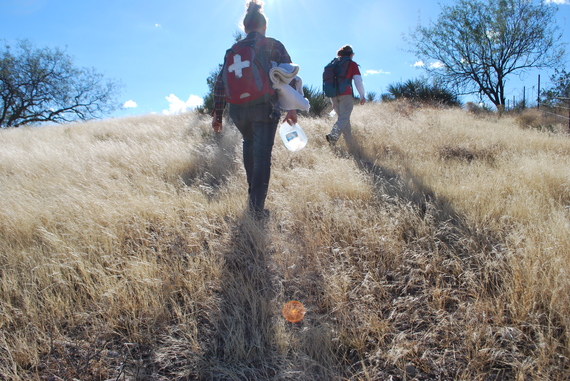 As the meeting gets underway we listen to reports from the prior week's trips and a presentation on the recent arrival of many women and children from Guatemala who are being dropped off by ICE at the downtown Greyhound Station. The meeting concludes with a moment of silence in honor of those who have lost their lives while crossing. We then connect with Rebecca who will be our group's guide on a trip that week. She tells us to pack a lunch and meet at 7am.

A few days later we pull up to the church again, passing day laborers in hoodies in the early morning light. Rebecca and another volunteer are opening up the supply shed. The air is cool, but not nearly as cold as it was the night before. In addition to loading crates of water and survival packs filled with snacks, socks and chapstick into the car, we also pack thick blankets in the event that we might come across someone who is spending the night in the desert. The last thing to go in is a backpack of medical supplies, worn and red with a big white cross made of tape on the back.

The Arizona desert is not what I thought it would be. I was expecting a flat, brown expanse with scattered shrubs. Instead, there are mountains in every direction. The terrain is jagged, hilly, and covered in all manner of prickly and puncturing plant life. It embodies a feeling of timelessness and vastness, which dwarfs human life, and indeed many do get lost or swallowed up in it. What has always been a harsh landscape has been made even more perilous in the past two decades with the increased militarization of the border. In addition to cacti, lack of water, hot days and freezing nights, the desert now also holds drones, heat sensors, armed patrol, helicopter surveillance and vigilante militia groups. 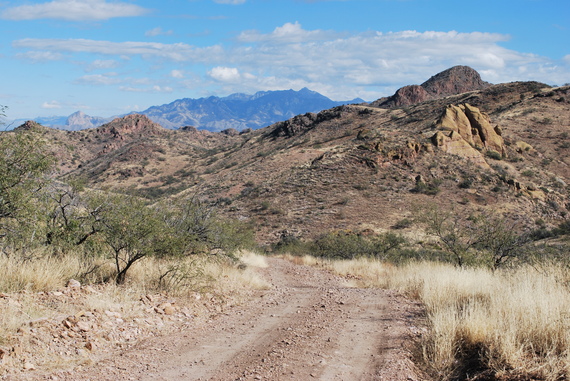 We turn off the highway and onto ranch road 684, a rough dirt road that would not be passable without 4-wheel drive. Rebecca takes note of the mileage because the turn off point should be in about 12 miles. Due to the state of the road it takes us almost an hour to get that far. As we pass towering rock formations and fields of yellowed grass, one of the more experienced volunteers notes how different the landscape looks from season to season, how disorienting it can be and how easy it is to get lost. Today we are on our way to a location in the heart of the Tumacacori Mountains, about 10 miles north of the border, where a shrine has been constructed for a 14 year-old girl from El Salvador who died while crossing.

The hike to the shrine is circuitous and at times treacherous. At a certain point one of the volunteers fell down the side of a narrow path with a steep edge. It is hard to imagine what this would be like at night. Even placing my feet with great care still yields tons of thorns in my sneakers and socks. I stop every few minutes to take them out. Small as they may be, they are painful.

Josseline Jamileth Hernandez Quinteros traversed this landscape for two days before losing her life to it. She was accompanied by her ten-year-old brother. After a journey of several weeks coming up through Guatemala and Mexico she was within a few days of her mother's embrace in California when she became violently ill. She told her brother to stay with the group and to go on without her. Aid volunteers found her body a few weeks later.

Today a simple shrine has been erected in the place where she took her last breath. A weather-beaten white cross, garlanded with rosary beads, stands in front of a large pile of rocks. A candle and some prayer cards lay at its' feet. As we approach the group chatter falls to a hush as we each reflect on the injustice of such an untimely and brutal end for this young woman. 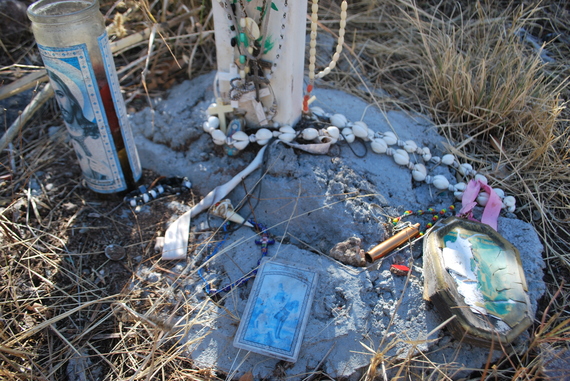 In the past six years there have been over two thousand known migrant deaths in Arizona. The remains of one hundred and fifty seven people were found in 2012 alone. It is likely that many more bodies go unfound, and of the ones that are found, many go unidentified. Migrant deaths have increased significantly since September 11th when "prevention by deterrence" became a primary immigration enforcement strategy, which has funneled people into harsher and less populated stretches of desert.

The Samaritans and other human rights groups consider this to be a full-blown humanitarian crisis. Border Patrol is seen as a foe by many communities, including those who live in small border towns like Arivaca, where they deal with the humiliation and inconvenience of checkpoints and helicopters on a daily basis. On the other hand are militia groups who feel that not enough is being done to "defend the border", and so they go out themselves, intimidating migrants, slashing water jugs and taking shots at cans of food.

Migrants who are detained by Border Patrol are pushed through the court system en masse as a result of a program called Operation Streamline. Under Operation Streamline approximately seventy people are processed each day in the Tucson sector. First-time detainees are counseled to plead guilty to a misdemeanor, which means they will have a record and can be charged with a felony if they are found re-entering. Although most plead guilty they are still held for 30 days before being deported, which has been a huge boon to the private prison industry.

We wind our way back from the simple white cross and tattered handkerchiefs, having lightened our collective load by two gallons of water, in the hopes that some other traveler's life might not end in the same way that Josseline's had. The way back is faster, more certain, even as the paths come in and out of visibility. Crossing the border is not a journey that anyone undertakes lightly; it means risking one's life. I am called to question why the same forces that compel migration also criminalize it. Perhaps crossing the border is the first of many indignities that are to occur living as an undocumented person in the U.S.

We don't meet anyone on our meandering desert walk. We announce our presence every 20 minutes or so, which seems like enough because there is nothing competing with us in that overwhelming silence. Rebecca assures us that people crossing will only reveal themselves to the volunteers if they are in real trouble; otherwise they try to stay hidden during the day.

The immigration reform bill currently being proposed would be devastating to the humanitarian crisis that is already occurring on the border. What in theory is a bill that would unite families and give much needed and desired legal status to the millions of undocumented immigrants already living in the United States, is also a defense bill, that would approve billions of dollars to be spend on continuing border wall construction and other military technologies. As has been reported in the New York Times and elsewhere, and which is gravely confirmed by activists on the ground, greater border security simply means more dangerous crossings and thus more deaths.