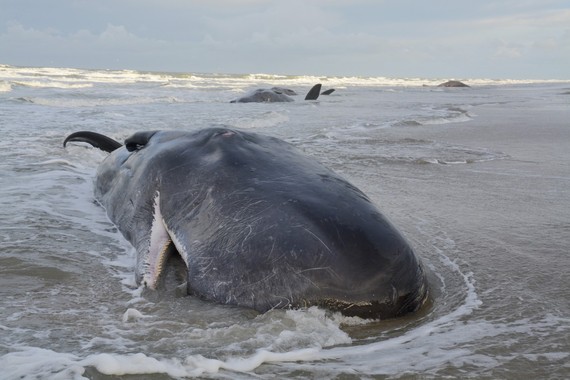 My colleagues at Baylor University, Santa Barbara Museum of Natural History, and the Smithsonian Institute perfected a method of studying whale earwax, which similarly to tree rings, shows a snapshot of the environment. 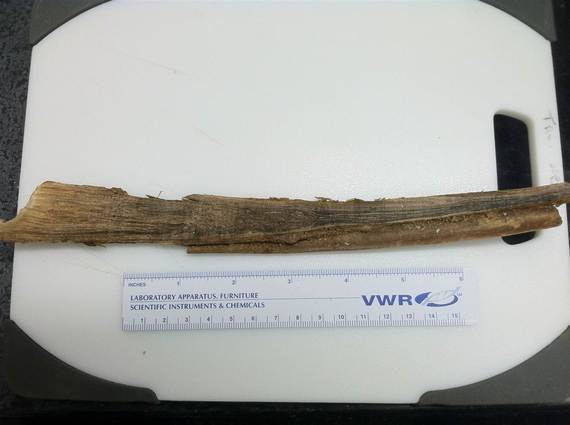 In 2007, a 12 year old blue whale was struck and killed by a ship off Santa Barbara, Calif. A 10-inch, giant plug of its earwax revealed 16 pollutants including flame retardant, methylmercury and several persistent organic pollutants including high levels of DDT and PCBs. The whale's biography divulged an eastern Pacific Ocean rife with man-made toxicity. 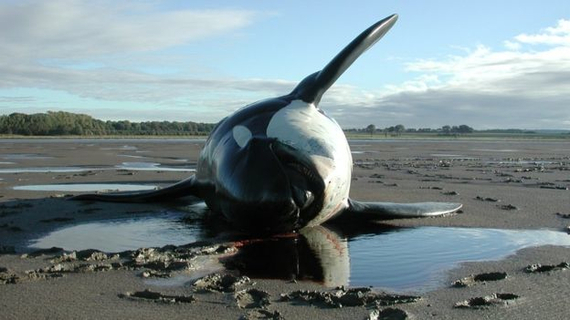 Last week (Jan. 14) the UK Cetacean Strandings Investigation Programme presented data from 1,000 whales, dolphins and porpoises (cetaceans) across Europe that showed the highest concentrations of man-made contaminants, most notably PCBs, ever recorded in ocean mammals. The researchers concluded that UK cetaceans are at risk of extinction due to lingering toxic chemicals. 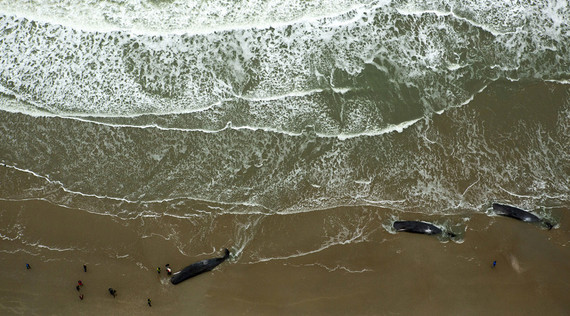 Twelve enormous beached sperm whales died along the coast of the Dutch island of Texel and the German islands of Wangerooge and Helgoland last week. It is appalling to see these record-holding deep divers beached with blood trickling out of their mouths. 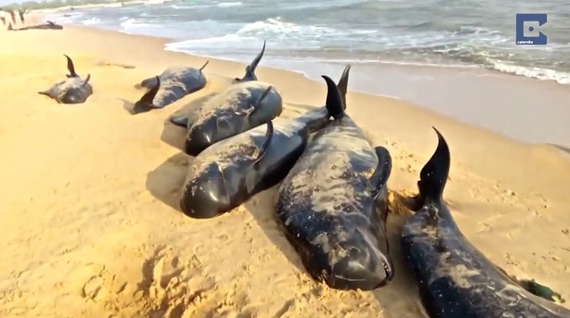 Also last week, at least 73 short-finned pilot whales lay dead along a stretch of beach in the Indian state of Tamil Nadu. Necropsies are underway there, too. 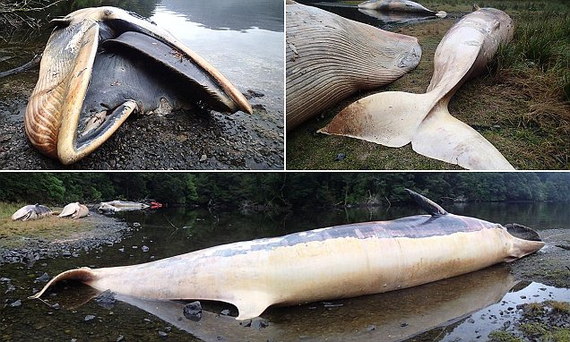 In June of 2015, 337, 23-ton each, Sei whales were found beached along a remote coast of Chile in one of the largest whale strandings ever recorded. Toxic algal blooms from rising ocean temperatures are being implicated in their deaths. 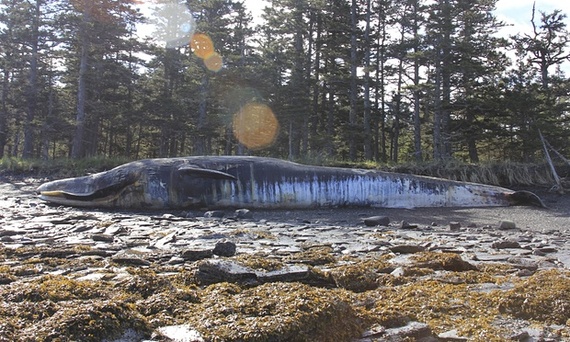 From May to June of 2015, 30 fin and humpback whales washed up along the coasts of northern British Columbia and Alaska amidst a massive algal bloom in the northeastern Pacific Ocean. Necropsies have yet to reveal the cause of death. 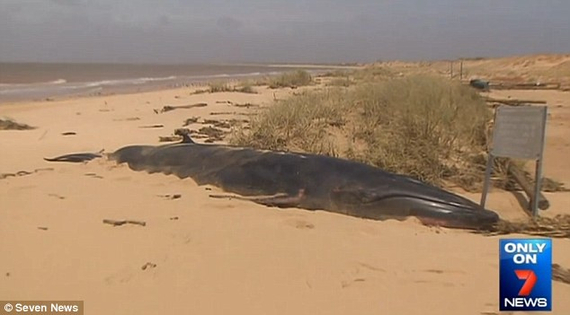 Once thought to be extinct this deep diver was found dead along a remote beach in Western Australia in April 2015. Photo credit: dailymail.co.uk

In mid April of 2015, a rare 18-foot female juvenile Omura's whale washed up along a beach near Exmouth, Western Australia - almost 800 miles north of Perth. 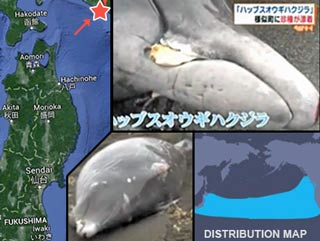 For almost five years the crippled Fukushima's nuclear reactor has poured thousands of tons of radioactive Cesium 134/137 and Iodine 131 wastewater into the Pacific, a spate of rare whales began recently washing ashore onto Japan. The casualties included a rare Hubbs' beaked whale and a Stejneger's beaked whale. 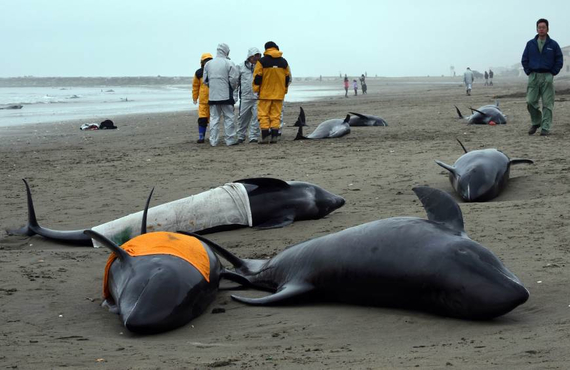 In the second week of April (2015) a couple days prior to finding these rare whales, 160 dolphins beached themselves about 50 miles from Fukushima. Those necropsies exhibited ischemia or white lungs, which is linked to radiation poison from children at Chernobyl, Ukraine and survivors of the atomic bomb in Japan. The chief scientist said, "I have never seen this before." 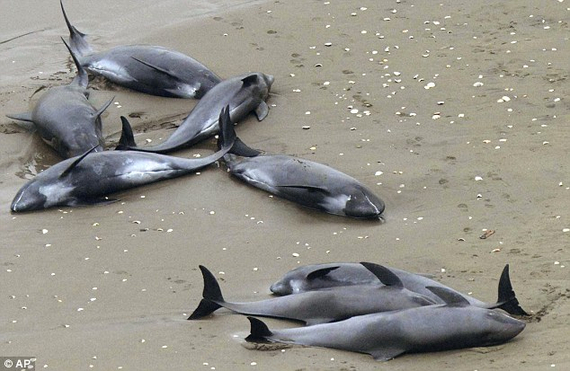 Also in the second week of April, 149 melon headed whales washed up along Hokata shores and seven more were stranded in the nearby municipality of Kashima, Japan. 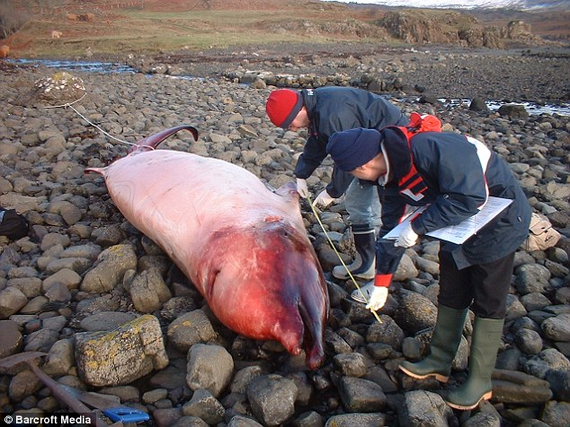 Earlier in 2015, almost a dozen deep diving Cuvier's beaked whales were found dead along the west coast of Scotland - a five-fold increase in the number of stranded whales. 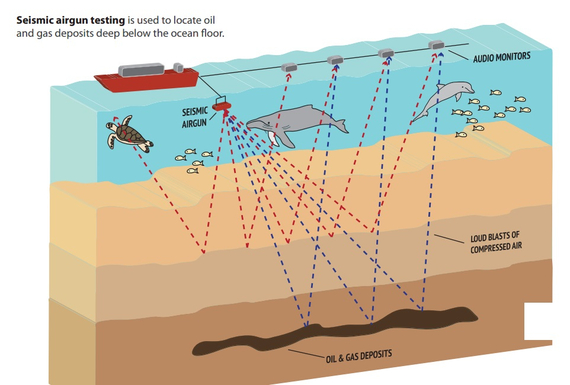 Every 10 seconds, non-stop for a couple months, explosions eight times louder than a jet engine bombard the ocean floor. It is a flagrant example of rampant ecocide. Photo credit: oceana.org

This much we do know: sonic airguns used to locate climate-altering fossil fuels shatter cetacean eardrums, which lead to an excruciating death.

Fukushima continues to uncontrollably bleed megatons of radioactive toxicity into the Pacific Ocean.

The climate crisis is predicted to increase toxic algal blooms, and it is increasing the acidity of the oceans at a rate faster than the previous 300 million years.

Approximately 44,000 factory trawlers are emptying the seas, committing ecocide and impoverishing all marine life. In fact, the rate of looting nature, under the sea and on land, is now driving the Sixth Great Extinction. 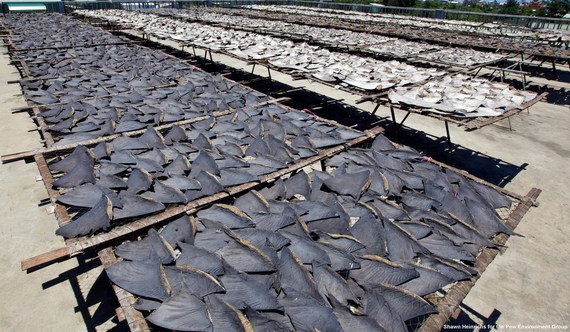 From 2000 to 2010 about 100 million sharks a year or 1 billion animals were slaughtered to feed an insatiable demand for sharkfin soup in Asia. When apex predators like sharks or cetaceans are removed, ecosystems unravel.

It is time for Japan, Iceland, Denmark and Norway to abide by the 1986 global moratorium on whaling.

The wellbeing of all the remaining "doctors of the sea" - cetaceans and sharks are crucial to our survival on the planet. The toothed whales and sharks keep their populations of prey fit by culling the old, weak and sick. They help to prevent diseases from becoming epidemics.

We are missing 40 percent of oxygen-bearing oceanic plants called phytoplankton - the base of the entire marine food web - from overheating oceans due to the climate crisis, courtesy of the $5.6 trillion annually subsidized fossil fuel industry. 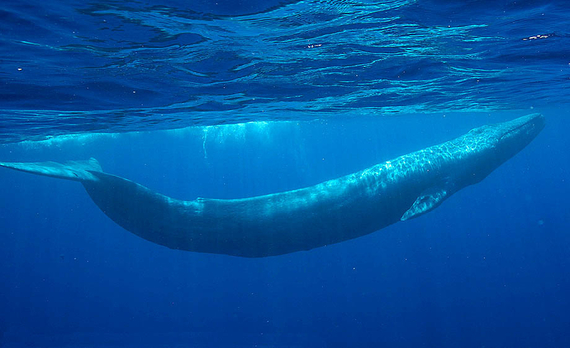 There are between 8,000-9,000 endangered blue whales remaining in the oceans; our lives depend upon their wellbeing. Photo credit: itravel-cabo.com

The filter-feeding whales are fertilizing the sea with their flocculent fecal plumes (their poo). It is rich in iron and nitrogen - essential to grow oxygen-bearing phytoplankton, which provides nearly three out of every four breaths of air we all breathe. The whales are helping us fight the climate crisis.

Clearly, it is incumbent upon all nations to immediately reduce spewing poisons into the biosphere and henceforth end subsidizing the fossil fuel industry. 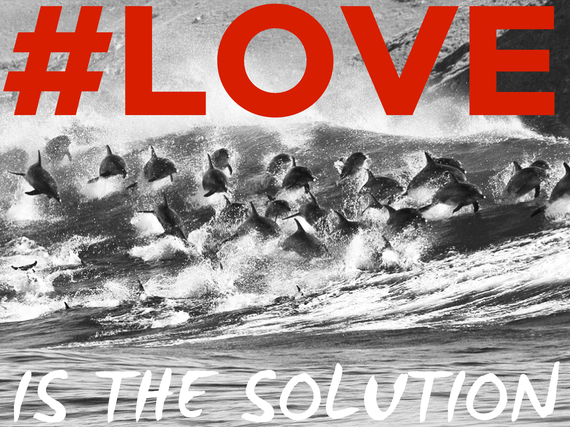 Cetaceans love to have fun -- just like we do! Photo credit: dailymail.co.uk

Unless protecting our sick oceans becomes a top priority for the G-20 meeting in Xi Jinping, China, we too will quickly perish. 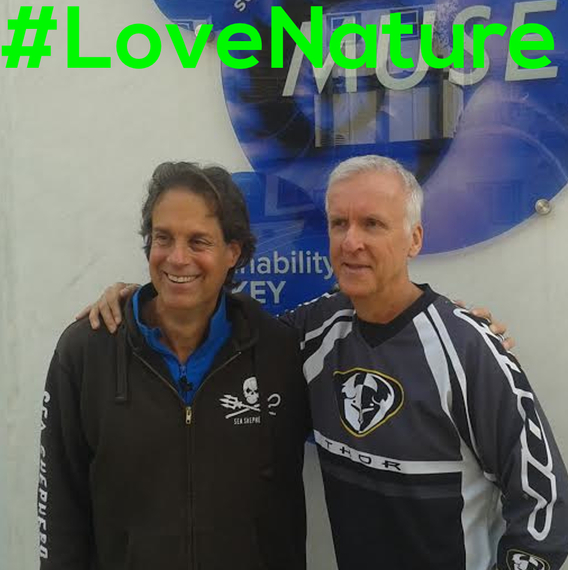 Earth Dr Reese Halter is a faculty member of the Patel College of Global Sustainability, University of South Florida and author of "Shepherding the Sea: The Race to Save Our Oceans."