Is there a greater catastrophe than the loss of a child? If you are Baha'i in Tabriz, the death of a loved one can be just the beginning of a new devastating experience.

For tens of thousands of years, human civilization has practiced burials for the deceased. However, in some areas of today's Iran, the discriminatory laws instituted by the Islamic Republic and a social culture of prejudice prevent members of the Baha'i community from burying their loved ones. These families in mourning, already devastated by loss, linger in a perpetual state of agony as they search for a place where they can lay their loved ones to rest. 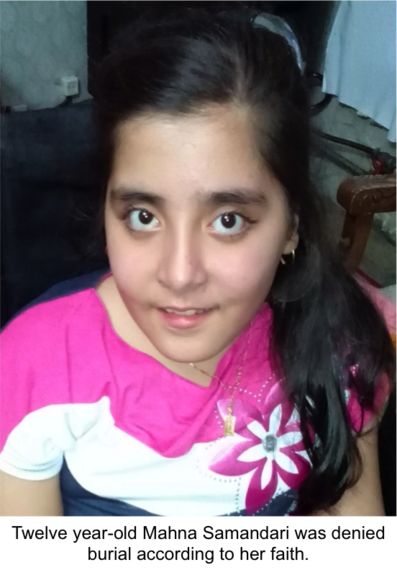 The Samandari family has struggled with such heartbreak. For over three weeks following the death of their twelve-year old daughter, Mahna, the family fought for the right to bury her according to Baha'i religious law. Mahna's parents, who both suffer from physical handicaps, not only grieved the loss of their young daughter but were unable to bid farewell to her according to their religious tradition.

Though Iran's indigenous Baha'i faith has confronted challenges since its birth in mid 19th century, members of the community were burying and mourning their loved ones without much interference. The Baha'i community in Tabriz had acquired a cemetery that was subsequently confiscated by the government. Since August of 2011 the authorities have imposed new restrictions on Baha'i internments that have denied at least 20 Baha'i individuals from burial rites.

As an alternative, authorities are demanding that the community transfer the bodiesto a burial ground in Urumia or the city of Mian-do-ab, located at least 60 minutes outside of the city of Tabriz where there is a Bahi'i community. However, common sense and religious laws prohibit remote burial grounds, especially for the Samandaris who are physically disabled and unable to travel long distances.

Even more recently, an elderly Baha'i woman, Narges Khatoun Barghi, passed away and members of her family were denied the chance to bury her according to Baha'i traditions. Her body, along with that of Manha, were kept in the government controlled Vadi Rahmat morgue in Tabriz, while devastated family members struggled to make sense of an exhausting bureaucracy of discriminatory laws. In search of some resolution, their families were forced to continue to suffer simply because of their faith and the senseless policies that punish the dead for the "offense" of dying while Baha'i.

A recently released report confirmed that the authorities finally buried these individuals in the remote city of Mian-do-ab -- yet this occurred without any notification of the families about their fate. Neither members of Samandari nor Barghi families were present when their loved ones were taken by random strangers and buried. They didn't say goodbye. They didn't say their prayers. They didn't experience the much-needed closure.

Not much as personal information has been available regarding Narges Khatoun Barghi, but the twelve-year old Mahna suffered from a form of paralysis that impaired the use of her hands. Despite her handicap, she pursued her passion for art and painted with her mouth. A gifted artist with determination, Mahna obtained the first prize in art in a national competition.

Life for Mahna would not have been easy had she survived to reach adulthood. As three generations of the Baha'i community in Iran have witnessed, discriminatory laws would have eventually barred her from entering college or university. Although the United Nations and legal authorities around the world consider education a basic human right, the religious leadership in Iran opts to deny segments of its population of this right.

But to prohibit people from a proper burial in their own cemeteries simply because of what they believe? It's a loss of human dignity that all decent people should mourn.