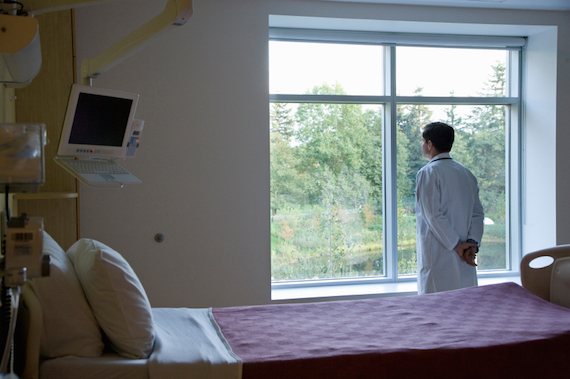 I was working in the Intensive Care Unit (ICU) as a medical resident when I learned that my 89-year-old grandfather had died. His heart had stopped suddenly, just moments after he emerged from the community pool for his daily exercise. The news came as a shock. Despite a long history of heart disease, his mind was still sharp and we frequently had engaging phone conversations.

But after the initial shock, I looked at my surroundings in the ICU and felt relieved that my grandfather had died a "good death" and not in a hospital.

My work in the hospital, and particularly in the ICU, led me to develop strong opinions about how I wished to die. I saw many patients with advanced medical conditions and poor prognoses spend their last days or weeks in a strange place, receiving intense medical interventions that caused discomfort -- like ventilators, central lines, and dialysis -- while only negligibly prolonging their lives. Their families not only had to watch their loved ones decline, they also had to deal with challenging and sometimes costly medical decision-making they did not always understand.

One of my ICU patients, with history of a stroke and diabetes, was hospitalized for pneumonia. Like my grandfather, this patient went into cardiac arrest, but we managed to revive him through cardiopulmonary resuscitation. I felt mixed about this "success" because of the patient's poor prognosis. He spent a week unresponsive before dying in the hospital, while anxious family members returned daily, hoping for an unlikely recovery.

I wanted to avoid this kind of death for other patients, my family, and myself. As a result, before I turned 30, my wife knew that if I ever faced a grim prognosis, I did not want intensive medical therapies -- admittedly not a typical conversation between two people in their twenties. And I was not alone; many of my of my fellow residents felt similarly about the end of life. Following aggressive treatment of another ICU patient, one colleague quipped that he planned to get "DNR" -do not resuscitate -tattooed on his chest to ensure that his end of life wishes would be known.

Indeed, in surveys physicians report a strong interest in advance directives for themselves, and many doctors describe that they would want to minimize intensive treatment in the face of terminal illness. Ken Murray, in his essay "How Doctors Die", writes that most doctors are aware of the limits of current medical interventions. He also describes that doctors see many of these same interventions performed -- futilely -- on very sick patients. As a result, Murray argues that doctors oppose heroic measures near the end of their own lives and tend to die comfortably at home.

But the narrative that doctors die differently than everyone else because of this insight may be worth revisiting. In a recent study, my colleagues and I compared location of death for doctors to that of the general population. Although we found that doctors were less likely than the general population to die in a hospital, we found no difference when comparing doctors to individuals with similar levels of education but no medical training. We also found that doctors were only marginally more likely to die outside of any medical facility, i.e. at home, than individuals with similar education. Our findings suggest that doctors' intense education and training may lead to slightly more favorable circumstances in death. But similarly favorable circumstances are experienced by individuals with high health literacy and socioeconomic status.

The truth is that it's easy for me, as a young, healthy physician, to state that I want to die in my 80s without intensive medical intervention. Indeed, most Americans report a preference to die at home. But carrying out such a plan is difficult, because end of life decision making is not usually a straightforward choice between dying at 89 following a morning swim versus a prolonged stay in the ICU. More commonly, we are forced to choose whether or not to start or continue to treat a potentially fatal disease. And in a life or death situation, our preferences may not always hold, even for those of us who have a relatively sophisticated understanding of the treatment options and prognoses associated with medical decisions near the end of life.

My grandfather was a college graduate with a successful career as a builder. These advantages helped him live a long life and may have contributed to his "good death." But, ultimately, my grandfather's circumstances were not the result of a plan. He was just lucky, at least in the view of this grieving physician.