Although her wedding to hedge fund founder Paul Arrouet took place weeks ago, Dylan Lauren has finally given the world a peek at the dress designed for her by dad, Ralph.

Dylan poses for the August issue of Vogue, in which Andre Leon Talley chronicles every last detail of her nuptials, down to the bride's nine-foot, tiered train.

A few details about the dress were made known before the wedding, including that Ralph consulted Vera Wang for help on the design, as the Daily News reported.

Dylan agreed, saying, "It's really beautiful. I know that every bit of his energy and heart went into making sure that I liked it."

Now, the silk tulle-and-duchess satin dress with the mermaid hem is revealed in the pages of Vogue's "Age Issue," in which Dylan represents women in their 30s.

Andre Leon Talley's accompanying profile focuses largely on the 37-year-old's professional life as the owner of Dylan's Candy Bar but does not neglect juicy wedding day details, including the high-profile guests (Martha Stewart and Bruce Weber among them) and bridesmaids get-ups (dresses in Candy Bar-logo colors with optional, custom-made Spanx).

Click to see Dylan Lauren in Vogue's annual "Age Issue" portfolio at Vogue.com and pick up the August issue of Vogue for the full story. 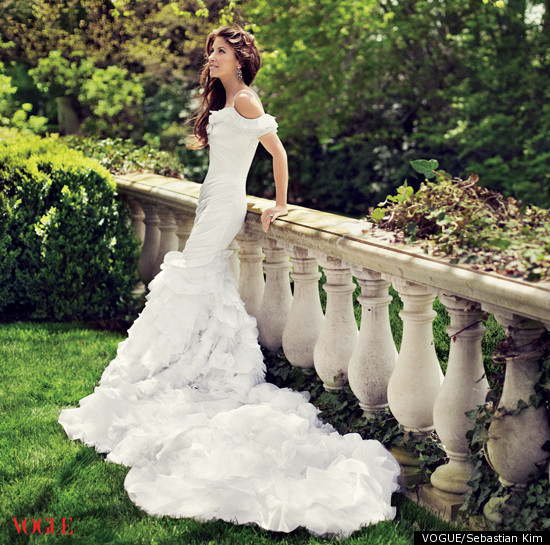