A Colorado woman accused of cutting out a baby from a pregnant woman's womb had lost her own child more than a decade ago.

Longmont woman, Dynel Lane, 34, was identified Thursday as the primary suspect in the crime that has left a once-expectant mother in the hospital without her unborn child, the Times-Call News reports.

The victim, 26, went to Lane's home Wednesday afternoon in response to a Craigslist ad for baby clothing. The victim was seven months pregnant when Lane allegedly beat and stabbed the woman after she arrived at the home.

"This is a tragic case for a mother right now," Longmont Police Department spokesman Jeff Satur said, according to the Associated Press. "She came by this house. She was attacked, and her baby was removed from her."

Relatives of the suspect told the Associated Press that Lane lost a child of her own in 2002 when her 19-month old son drowned in a shallow pond.

A copy of the 911 call obtained by the Huffington Post details the terrifying moments when the victim, identified only as Michelle, begs for police to hurry.

WARNING: This audio may be disturbing to some.

In the recording, Michelle tells the dispatch operator, "She cut me in the stomach, I'm pregnant." Her voice is low and fading as she becomes increasingly lethargic. "I'm bleeding out," she moans.

"Stay with me, ok?" the dispatcher says. "I've got everybody coming to help. Stay on the phone, don't hang up."

The victim, who says she is lying in the basement, is unable to give the suspect's name. At one point she is unable to spell her own last name.

"You stay with me, don't go to sleep!" the dispatcher tells her.

Officers who responded to the home said they could hear a woman yelling for help. The victim was taken to the hospital and is expected to recover after undergoing surgery. The baby is dead. 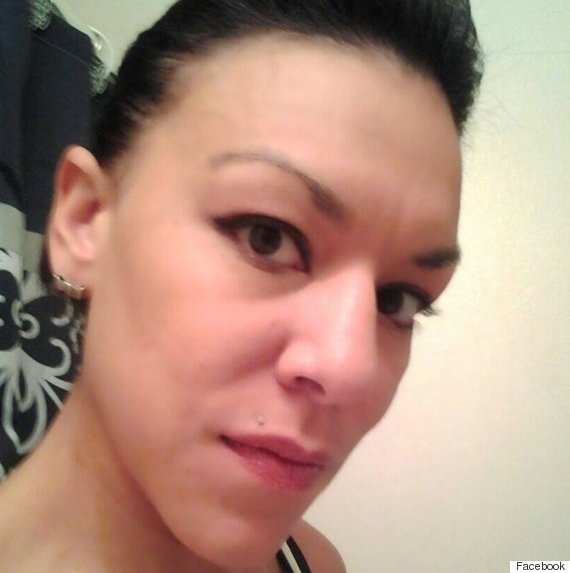 Just 15 minutes prior to Michelle phoning police, Lane's husband, David, arrived at the residence. According to a police report obtained by HuffPost, David made his way down towards the basement before his wife turned the corner, covered in blood. More from that report:

"She told David she just miscarried and the baby was in the bathtub upstairs. David ran upstairs to the bathroom and found a small baby lying in the bathtub. He rubbed the baby slightly then rolled it over to hear and see it take a gasping breath. David wrapped the baby in a towel and ran back downstairs. He told Dynel to get ready to go to the hospital."

The two arrived at the same hospital where Michelle was being treated. Lane allegedly told hospital staff the victim's baby was her own. However, she refused to be examined vaginally, according to the report.

Doctors who treated the victim stated that "the person who did the incision would have to have researched the subject of Cesarean Births in books or online to achieve the level of accuracy," the report reads.

Detectives indicate in a police report that Lane confessed to cutting the baby out of the victim. According to online records, Lane was a certified nurse's aid. Her license expired in 2012.

The husband is not considered a suspect.

Detectives who spoke to Lane's daughters said they had been shown photos of a December 2014 ultrasound of a boy by their mother. One of the daughters remarked that "she could not tell Dynel was pregnant and [she appeared] very petit."

The suspect's deceased son, Michael Alexander Cruz, was found by Lane and her daughters -- who were 5 and 3 at the time -- dead in a fish pond in July, 2002, the AP reported.

The child was known as "Little Mac," according to his obituary obtained by HuffPost. He loved playing with his family and friends, and had just learned his first song, "Twinkle, Twinkle Little Star."

Lane has been charged with attempted first-degree murder and child abuse resulting in death, according to online records.

Michelle is alert and answering questions, police said. Police are asking that anyone who responded to Lane's Craigslist ad for baby clothes call LPD at 303-651-8501.