The Washington tantrum that threatened the global economy over the last several weeks is no isolated instance of some peculiarly American dysfunction. Despite its bombs and bravado, its long history of sovereign independence, as well as its boast of being democracy's conservator for the last 400 years, the nation state is everywhere at risk. Commentators as different as Parag Khanna in Singapore, Pierre Manent in France and Daniel Cohn-Bendit in Germany have recognized that governmental paralysis in the U.S., Italy, Spain and the countries of the Arab Spring is more than a matter of the moment but suggestive of decrepitude. As Daniel Cohn-Bendit and Felix Marquardt wrote, "the nation-state is fast becoming obsolete." 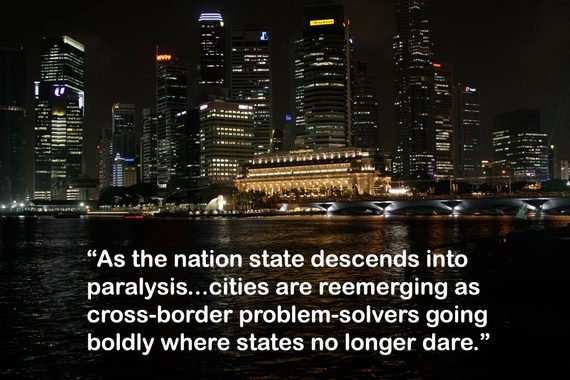 Whether in the United States, where reckless right-wing tea party populists have paralyzed Congress and threatened global financial chaos, or in Italy, where Berlusconi's destabilizing antics have normalized anarchy, or In China, where the communist central government seems unable to control runaway capitalism, states are proving themselves incapable of action in the face of global crisis. They seem no more able to deal with climate change, though it threatens civilization itself, than to confront civil war and genocide, whether in Syria or Sudan. In the contradictions between ubiquitous "illegal" immigration national laws decry but do nothing about, and the reality of a borderless economic world of which illegal immigration is but a reflection we see the dilemma; between the chaos of an unregulated global economy and the absence of political will to deal with it despite its depredations we can see the absence of solutions. Sovereign states simply do not offer effective global governance.

Yet in a welcome counterpoint, even as the nation state descends into paralysis and democratic dysfunction, cities are reemerging as cross border problem-solvers going boldly where states no longer dare go. China greeted American dysfunction with a call for "de-Americanization" of the world. More pertinent would be denationalization: the devolution of power down to municipalities where the real action is, and the ceding of power upwards to a global governance structure based on cooperating cities. It is already happening. Urban pragmatism is displacing national ideology, cosmopolitan cooperation is remedying parochial nationalism, bottom up city democracy is challenging top down statist bureaucracy.

This is hardly an accident. Cities are after all older than the states to which they belong (Rome far older than Italy, Damascus older than Syria, Boston older than the United States, Alexandria older than Egypt). More importantly, cities are avatars of our human identity. We are German or Japanese or English only in terms of invented monocultural identities; politically such identity amounts to little more than occasional voting or paying taxes, otherwise national politics understood as a spectator sport at best, something we watch on television.

But we are Londoners or Parisians or Romans as a matter of our core being. Cities are where we are born, where we are educated and grow up, where we work, play, pray and create, where we are married, have children, get old and die. Cities are home, cities are us. Cities are the essence of community and theaters of participation and innovation for all of us. No wonder they are so resilient, immunized against paralysis and failure. Mayor Nutter of Philadelphia said during another of the periodic shut downs of government to which central government has treated its citizens, 'we could never get away with the stuff they do up in Washington. We've got to pick up the garbage and keep the buses running.' Imaging closing down London or Tokyo or New York! No police, no fire brigade, no buses or hospitals or schools? Couldn't happen, never has even when cities were under bombardment or under siege.

As Edward Glaeser has said, we are an urban species. Urbanization has been our destiny. Just a few years ago, UN Habitat reported that for the first time in history more than half the population was living in cities. In the developed world, it is nearly 80 percent. We are living our metropolitan destiny.

Cities are not only more pragmatic and grounded and participatory than nation states -- 'participatory budgeting' has become a favorite innovation of cities world-wide -- they are also cooperating to address issues like climate change. The old global environmental coalition of cities called ICLEI has been joined by the newer C-40 and together are developing common measures to combat greenhouse gases -- 80 percent of which are generated in cities. Los Angeles has cleaned up and greened up its port, New York has improved its old housing stock with new insulation and white-painted roofs, while Bogota has developed rapid transit surface lines on segregated highway lanes, with significant reductions in emissions being achieved in all three cities.

The United Nations has been of little help in resolving toxic global issues. United Cities and Local Governments (UCLG), perhaps the most important global association no one has ever heard of, had facilitated practical steps to fashioning common urban solutions to global problems. That is why in the last chapter of IF MAYORS RULED THE WORLD I have proposed a Global Parliament of Mayors as a kind of network of urban networks, a keystone in the expanding arch of international associations embodying urban cooperation.

The polis was once the birthplace of civilization and democracy: today, the cosmopolis beckons -- not just an alternative to the incompetence and disorder of declining nation states, but an inviting option in creating global comity and justice on an interdependent planet that demands civic cooperation.

Political Theorist and Founder of the Global Parliament of Mayors