Unlike most fonts, which prioritize easy and swift readability, graphic designer Daniel Britton's recent creation does just the opposite. Meant to raise awareness for dyslexia, the font strips letters of their qualities that make them easily recognizable. An "A" is transformed to resemble an upside-down "V"; a "D" is turned into a backwards "C." The result is a jumble of shapes that takes extra time and concentration to interpret.

In a description of the font on his site, Britton writes, "What this typeface does is break down the reading time of a non-dyslexic down to the speed of a dyslexic. I wanted to make non-dyslexic people understand what it is like to read with the condition and to recreate the frustration and embarrassment of reading everyday text."

Britton himself has dyslexia, and says the condition is misunderstood and miscommunicated, even by educators. Which is why he's created a package to promote the font as a means of raising awareness for dyslexia. 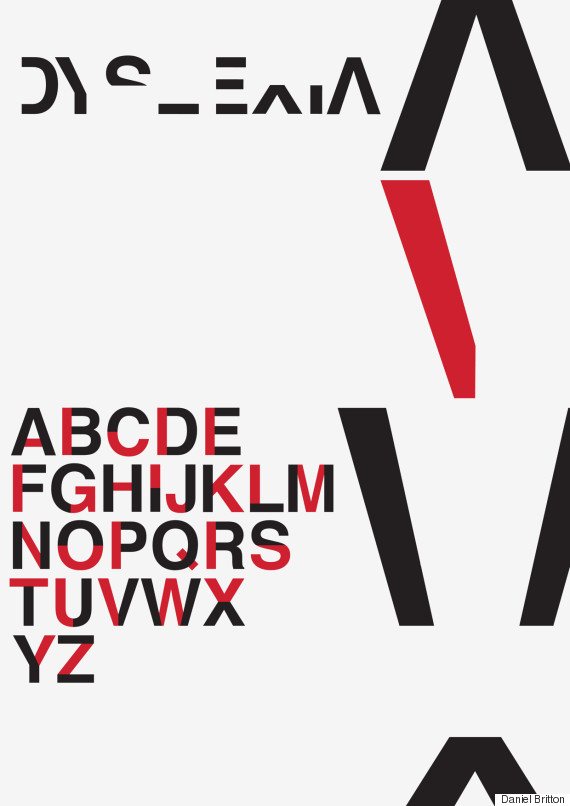 One in every five people has dyslexia, making it the most common learning disability. Those with dyslexia undergo a more complicated chain of thoughts when associating the image of a letter with the sound it makes; therefore up to five times more energy is expended in language processing.

Because they rely on creativity to circumvent stalled reading and writing abilities, those with dyslexia tend to excel in other artistic mediums, which may begin to explain why visual representations of dyslexia are common. Designer Sam Barclay also used typography to recreate the feeling reading invokes in those with dyslexia. Alternative phonetic spellings are printed in ornate serif fonts, letters are jumbled or cut off, words are rearranged. These illustrations, along with Britton's, show that dyslexia isn't a disease, but an alternate way of seeing.

You can donate to Britton's Dyslexia awareness package on his Crowdfunder site.