BOSTON -- All eyes have been on Dzhokhar Tsarnaev throughout his federal trial for any hint of what he’s feeling. The 21-year-old finally made some of his emotions clear Monday during testimony from aunts and cousins who hadn’t seen him since he was 8 years old.

The convicted Boston Marathon bomber dabbed his eyes several times with a tissue while Patimat Suleimanova, his elderly aunt from Dagestan, Russia, began sobbing uncontrollably as soon as she took the stand for the defense. District Judge George O’Toole excused her quickly so she could regain her composure.

Tsarnaev also blew a kiss toward his relatives who waved at him while U.S. marshals led him out of the courtroom for the lunch recess.

The defense is trying to avoid a death sentence for Tsarnaev, who’s been convicted of several capital crimes from the bombing attack that killed three and injured 264 more, and the separate shooting of a Massachusetts Institute of Technology police officer.

The relatives praised Tsarnaev and also expressed that they were “scared” by his mother’s turn toward conservative Islam after the family moved to the United States in 2002. 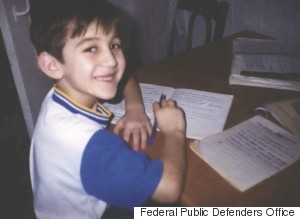 “I can only say good things about Dzhokhar and that’s not because he was my cousin,” said Raisat Suleimanova, an ICU nurse near Moscow. “I think that his kindness made everybody around kind. I don’t think there’s anybody in our family who didn’t like him, who didn’t love him.”

She was one of three cousins and two aunts called to the stand. They described how Tsarnaev’s parents moved frequently between the Russian republics of Dagestan and Chechnya, as well as Kyrgyzstan, where Tsarnaev was born. They reviewed many family photos including one here showing Tsarnaev beaming and doing homework as an elementary school student.

For months each summer, Tsarnaev, his parents and his three siblings would crowd into a two-room apartment already inhabited by at least six other family members in Dagestan, according to the relatives.

As a child about 4 years old, Tsarnaev cried during a viewing of "The Lion King," which impressed some family members as a sign of empathy.

On cross-examination, the prosecution struck at the testimony that Tsarnaev was a kind and sensitive person.

“You would agree that the bombing of innocent people isn’t an act of kindness,” Assistant U.S. Attorney William Weinreb asked Raisat Suleimanova.

The defense objected, blocking her from answering.

The tears Tsarnaev shed for a dead Lion King character were sarcastically compared by Weinreb to his alleged lack of remorse for the dead spectators at marathon.

The jury will soon decide a sentence for Tsarnaev: execution or life in solitary confinement without parole. His family members were considered to be key witnesses with a vital role in persuading the jury to be merciful, according to experts.

"The only way to save his life is to humanize him, to show he's really made from flesh and bones. It sounds like it was very effective," said Northeastern University law professor Daniel Medwed.

His emotional showing Monday might backfire, though, if the jury compares it to his reserved expressions during the earlier testimony of bombing survivors and the family members of victims, Medwed said.

"It might bring into stark relief how impassive he was [while] hearing the stories of the victims," he said. "[The jury] could say, 'Look, he doesn't care about anyone but himself and his family.'"

The defense has argued that Tamerlan Tsarnaev orchestrated the attack and that Dzhokhar participated because he couldn’t resist the influence of his older brother.

Some of the family members supplied testimony in line with that thinking.

“Dzhokhar loved his older brother very much,” testified Naida Suleimanova, a cousin who works as a gas station cashier. “This was the custom in our family. You always listened to your older sibling ... and follow his example.”

A photo of Dzhokhar Tsarnaev sitting on the shoulder of his older brother Tamerlan that was presented by his defense team on May 5, 2015.

Though the defense has focused its case on Tamerlan, it also turned its attention to his mother, Zubeidat Tsarnaeva, who allegedly first adopted a stricter form of Islam that she passed on to Tamerlan.

When she lived in Russia, she was concerned with fashion and wore bright clothing, relatives said during testimony. But after living in the United States for several years, she visited Russia covered head to toe in a hijab and dressed all in black.

“She was all covered up. We were all shocked. We were all in pain. We were very scared,” said Shakhruzat Suleimanova, Tsarnaev’s aunt. “We never had people like that in our family.”

This post has been updated with comments from Medwed.