It’s all fun and games until someone ends up in a cone.

So goes the caption to an irresistible LOLcat image I keep on my smartphone. It’s one that serves to underscore the immense pleasure we humans seem to get from subjecting our pets to the “cone of shame.”

Variously known as the “E-collar” (short for “Elizabethan collar”), the “lampshade,” the “satellite dish” and “that ungodly torture device that goes around her neck,” the ubiquitous plastic cone is by far the most common solution to the problem of postoperative incision complications and other areas in need of self-trauma avoidance.

That’s because most pets have a thing about licking at their incision sites, pawing at their itchy ears, rubbing their irritated eyes and generally scratching and chewing at body parts they shouldn’t. But what’s worse than having to force your pet to wear the cone?

Having to deal with the ravages inherent to self-trauma situations in pets. After all, restitching incision sites isn’t fun for anyone. And blowing beaucoup bucks on antibiotics after she has overdone it on what was once a simple scratch is no fun either. Given these alternatives, keeping one of these devices on your pet would seem to be the lesser of two evils.

But let’s say you have a pet who performs one of the following tricks when he’s sporting an E-collar:

Assuming your pet is like one of the previous examples, for whom the cone seems a solution far worse than the cure it’s designed to effect, you should know that you have plenty of options to choose from when it comes to the wider family of devices known as “avoidance” tools:

1. The BiteNot collar. This is, effectively, a neck brace. But, at the outset, let me just offer that if the satellite dish lacks appeal because it seems more like a cumbersome instrument of torture than a medical device, this ginormous neck brace alternative is not going to win you over.

Nonetheless, the BiteNot collar does work well for some pets — especially for lesions on the upper limbs and torso (not so much for pets who chew at their feet and tails and definitely not for scratching issues). At the very least, it isn’t likely to be misused as a weapon of mass domestic destruction.

2. The blow-up neck pillow. You know those pillows you buy last minute at the airport whenever you realize you’ve been rescheduled onto an evil red-eye flight? Picture a blow-up, neck-circling device that keeps creatures from turning full-circle.

I like it because it seems more comfortable than either an E-collar or a BiteNot, and it works a little like both. In my experience, however, it doesn’t work as well for highly destructive big dogs. They tend to pop it pretty quickly.

3. The paper collar. If heavy-duty plastic is frustratingly and painfully firm, try a soft collar (the E-collar “lite”). Some pets do well with these firm-paper alternatives. Surprisingly. They wear out faster and they won’t work for the truly motivated, but they’re an option for the more relaxed pets among us. 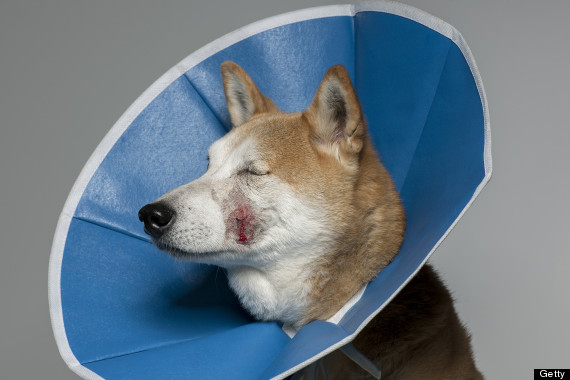 4. Boxer shorts, sweaters, booties, baby onesies and bandages. Garments and bandages can be amazingly helpful for keeping pets away from their areas of excess interest. Unfortunately, however, they’re not usually sufficiently effective on their own — with or without no-lick sprays (which have never worked very well for my pets but may work for yours).

Nonetheless, these tricks are always worth a try. What’s more, when they’re paired with some of the other above approaches they tend to yield results for some of the more avid lickers.

5. Full body armor. Consider this a variation on the garment approach above. Some pets will always still manage to reach the spot. And when all else fails, body armor is the next step. Several companies make these outfits with the extra-motivated chewer in mind. Ask your veterinarian for a recommendation.

Have a Better Idea?

In case this laundry list of highly imperfect avoidance options doesn’t make it obvious, let me come right out and say it: The world could use some better solutions for pets who self-traumatize. Veterinarians, at least, would be eternally grateful. Perhaps you have a solution we need to hear about. If so, now’s your turn to speak up!