Is there a "formula" for art? If so, e-David, a robot created by computer scientists at the University of Konstanz in Germany, may help solve it.

The brush-wielding bot, whose name is an acronym for "drawing apparatus for vivid image display," sports a camera, a palette of 24 colors, and software that lets it calculate just where to put the paint to create a predetermined image. Once the painting is complete, e-David even eerily signs its work -- just watch the robot in action in the fascinating video above, which is a bit like "i, Robot" meets Bob Ross. 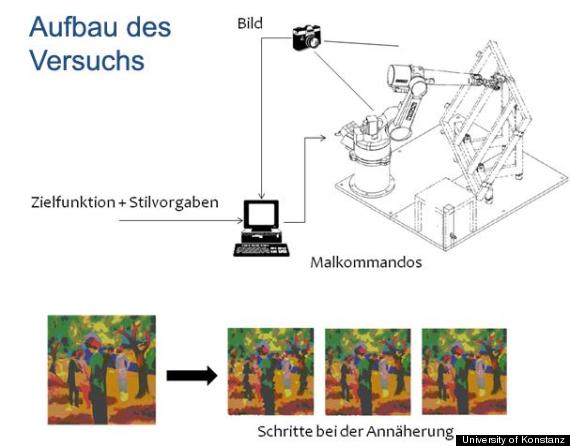 E-David isn't the world's fastest painter. After each leisurely stroke from one of its five brushes, the robot snaps a picture of its handiwork and calculates where on the canvas the next stroke should go. But the robot's creators believe this iterative approach may help bring a better understanding of the way in which artists visualize and generate a masterpiece.

"Our hypothesis is that painting –- at least the technical part of painting –- can be seen as optimization processes in which color is manually distributed on a canvas until the painter is able to recognize the content –- regardless if it is a representational painting or not," the scientists said in a written statement.

They went on to say that e-David "will enable us to enclose the whole process of drawing production into an optimization framework. This will allow us to investigate human optimization schemes and to find out to what extent such schemes can be formulated using algorithms."

But that raises a couple of big questions: Can art really be boiled down to a set of algorithms? And can a painting created by a robot be considered art--or is art something only a human can produce?