Long before the sun appears over the towering white cliffs all around us, this temporary village comes to life. The guardians of the ceremonial fire are stoking the flames for the temezcal; the kitchen crew is chopping and peeling and stirring; smoke is rising from the women's tipi. Suddenly the resonant call of the conch rings out over the valley, calling us to the salutation of the sun, and the cry of an eagle pierces the air like a blessing.

We are gathered in this enchanted valley for the Call of the Eagle, the tenth intercontinental gathering of a group of dreamers and doers who are quietly changing the world from the inside out: the Consejo de Visiones - Guardianes de la Tierra ('Vision Council - Guardians of the Earth').

Some 500 visitors from as far as Australia and as near as neighboring Chalmita -- filmmakers and farmers, psychologists and shamans, artists and teachers, spiky-haired punks and lyrical poets -- are learning to live together under the blue skies and bright stars of an itinerant ecovillage conceived more than a decade ago under the banner of the Rainbow Caravan for Peace and the Mexican Bioregional Movement. By the end of the week, this event will have touched the lives of more than 1,000.

This tenth gathering is a very special event for many reasons, chief among them that it is seen as the fulfillment of an Inca prophecy. When the Eagle and the Condor fly together, according to the prophecy, this will signal the dawn of a new era -- the Eagle representing the North, and the Condor representing the South. Here in this sacred valley, lying in the shadow of an ancient pyramid amid the fertile Bosque de Agua, a high-energy group of visionaries, artists, and activists from North and South has come full circle.

Fourteen years ago, a now legendary group of them, led by among others Alberto Ruz Buenfil, otherwise known as the Subcoyote -- cousin of Fidel Castro and son of the archaeologist who discovered Palenque's fantastic hidden treasures - set off from this region for an epic journey that was to create the foundation for an intercontinental environmental, spiritual and social movement. After holding the first intercontinental congress of the Vision Council, they headed off in a bus painted like an ear of corn through the Zapatista territory of Chiapas, through the volcanic highlands of Central America and the tropical lowlands of Amazonia all the way to the tip of the continent in Patagonia. Using theater and the arts to plant seeds of hope, peace and sustainability in conflict zones, indigenous villages and crime-ridden barrios, they connected and nurtured social movements throughout the continent.

Their second international event, the Call of the Condor in 2002, brought some 1,300 activists and artists to the Sacred Valley of Machu Picchu in Peru to begin the work of consolidating a vision for a transition to a new age. The third, Call of the Hummingbird, was held in Brazil in 2005 and drew more than 1,500.

Now, after 13 years, that caravan has finally come back to its roots, and the seeds they planted here in Mexico and across the continent have come full bloom in an astounding event that is awakening even the most cynical and reserved among us. Tears flow freely in the circles of dance, in the darkness of the temezcal, in the embraces of long-lost friends who have only just met.

But this is far from a feel-good encounter group. In fact, it's far from anything I've experienced. These folks are facing the future with their eyes wide open, painfully aware of the resource and climate crises that loom on the horizon. It's also not a hand-wringing session. No one here is waiting for government to resolve these pending crises, although government leaders are here to participate in the forums, workshops and demonstrations in areas encompassing ecology, health, spirituality, appropriate technology, and education among many others. Local schoolchildren, too, are brought in to participate in panels teaching self-reliance; local youth participate in forums organizing political and social action preparing for turbulent times in a post-petroleum world. Gaia University is here, sharing a revolutionary model for participatory education, granting diplomas, bachelor's and master's degrees while its students are engaged in planetary transformation.

One team is building an oven from mud and bricks, while another is building a solar clock; another group is learning about native herbal healing techniques, while still another is raising the ceremonial tipi that will be the headquarters of a powerful women's healing circle, and another is discussing strategies for protecting this valley, a strategic but highly vulnerable center for water conservation. Another initiative is gathering momentum to support the Huicholes in a struggle to save their most sacred site, Cerro Quemado in Real de Catorce or Wirikuta, from a transnational mining operation.

Sacred rituals from the world's great traditions mingle with dance and creations of art and song to raise the energy throughout the week to a level I never thought possible. Activities run from sunup to 3 a.m., but sleep seems superfluous.

The culmination of the event comes after an all-night vigil to greet the dawn; a spectacularly feathered and painted group of Aztec dancers await us around a blazing fire, and a mandala of dance and rhythm and song erupts.

As I sit down to try and put this phenomenon to words, I recall those of Coyote Alberto as we stood together on the last day.

"It's all so perfect," I told him. "My only regret is that it's just impossible to put into words."

He laughed knowingly -- the author of several books about the caravan and its Rainbow Warriors, and now involved in a project to bring the lessons of the caravan home in Mexico City, he has struggled with this problem daily.

"Nobody believes you when you try to explain it," he said. "They say, 'You're just writing what you want it to be.' There's no way to explain -- you just have to live it."

Never has a human being lived his words more authentically, more powerfully, more beautifully than the man at the heart of this vision turned reality. I can do no better than to end with some of those words, which Alberto shared with us during the closing ceremony.

Two hundred years ago these lands were the scene of bloody battles; much blood was shed among our grandfathers and grandmothers to make a step forward in the process of evolution, of growth, toward our liberty as individuals, as a people, and as a nation... A hundred years ago, again in these lands, much blood was spilled once again among our people, with the same goal, to be able to walk with a bit more liberty, a bit more strength.

This day will be carried in the hearts of each of us as we take one more step on this road to liberty, this road toward dignity and justice. Everyone is responsible for everyone else. Our commitment is to this struggle, no longer with weapons of war but with weapons of dance and music, art and ceremony and ritual.

If a hundred years ago a process of revolution began, today we also come to take a new step forward; we come to celebrate a re-evolution. We are standing here today, people from all over the planet, and each of us carries with us all our ancestors, all our traditions, all our grandparents, all those who struggled in the past to create a better future. Each one of you is the fruit of all the blood that was shed in these struggles, so that today we could be here present, celebrating, together in the same circle, with one heart and with one vision, on this day.

Our grandparents spoke of prophecies. Today they are watching, and they see in us the ones they were waiting for. 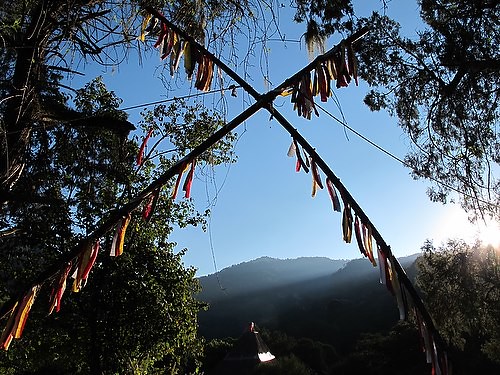