I attained the rank of Eagle in 1993, and in many ways it is the proudest achievement of my life, besting graduation from law school and completion of the Boston Marathon. Aside from my family and the Church, scouting is perhaps most responsible for the man I am today. That's not an uncommon sentiment among Eagles. So it is worth noting their response to last month's announcement from the Boy Scouts of America (BSA) reaffirming its ban on homosexual leaders and youth. Naively perhaps, I had hoped the announcement would signal a change in policy. When it did not, I reached out to fellow Eagles in the hope that there was something we could do, something we had not been able to do in the wake of the 2000 Supreme Court decision upholding the policy. As it turns out, I was not alone.

For those unfamiliar with scouting, it is important to realize that it is more than a single organization. Scouting is a global movement. The BSA does not hold a monopoly on what it means to be a scout. In fact, in the United Kingdom, where the movement began, the Scouting Association welcomes LGBT members. Here in the United States, the Girl Scouts have a more inclusive policy, and within the BSA itself, there are groups that oppose the policy and individuals working for change, including members of the BSA's executive board.

Following the Supreme Court's decision in 2000, many schools and a few faith communities banned the BSA from using their facilities. Largely unnoticed, however, was the converse threat. Many institutions, primarily faith communities, made it clear that if the BSA accepted homosexuals, it could no longer count on their support. If these institutions withdrew, it would decimate the national organization. In the final analysis, the BSA depended more on those faith communities than it did on public schools. Unfortunately, faith communities too often get a pass on these issues, a matter for another post. However, this dynamic helps explain the BSA's position and the difficulty faced by those working to change it. The past twelve years have made it clear that outside agitation from non-scouts and former scouts is not enough to prompt change. Those parties within the BSA working for change need cover. They need to know that in the event of change, sufficient numbers exist to weather the withdrawal of big backers. They need to know that individual scouts, scoutmasters, and families are not always in lock step with their faith communities on this issue. They need to know that alternatives exist for meeting places and sponsoring organizations.

When exploring the constellation of organizations working to change the BSA, I was pleased to discover a number of voices working to provide cover, many quite new, groups like Scouts for Equality, co-founded by Zach Wahls, whom many will remember for his testimony in front of the Iowa House Judiciary Committee regarding same-sex marriage. Scouts for Equality joins a number of groups like Scouting for All and a mix of Facebook groups and web petitions formed by current and former scouts, all working for change.

According to their website, Scouting for Equality has the backing of more than a hundred thousand Eagles. Although it is not immediately clear if this count comes from the group's mailing list or an aggregation of those who have signed various petitions, the site claims nearly a half million people stand with the group. In an interesting tack, the site has translated the public statements of politicians and celebrities into support for its cause, listing the support of both President Obama and Governor Romney. I am not sure it is fair to characterize these statements, pre-dating the group's formation, as endorsements of the group, but it is clear that the public figures listed on the site's front page have in the past expressed disagreement with the BSA's policy. In time, I hope these fledgling groups will evolve into a cohesive network of individuals and institutions willing to provide support to a more inclusive BSA--support the BSA will need in order to make a change.

Since the July 17th announcement, a number of Eagles have renounced their awards, returning them to the BSA. Scouts for Equality is keeping track of these former Eagles, but the site is clear to state that it does not endorse renouncing one's award. I for one am tired of retreating. When I earned my Eagle, I was told, "Once an Eagle, always an Eagle." For years my award has hung above the light switch in my bedroom. Stuck to the wall with poster putty, it is a daily reminder of a promise I made to do my best. So instead of renouncing my award, I'm using it to make a different statement. 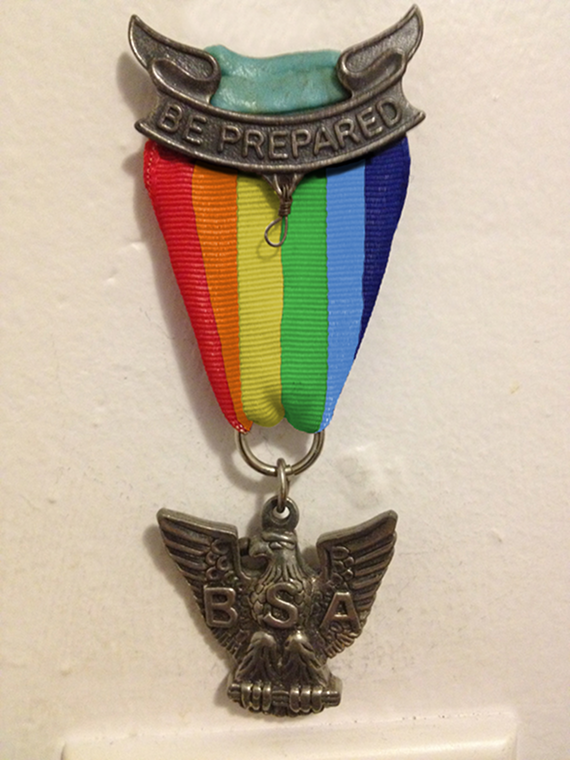 The BSA's current policy is a variant of "don't ask, don't tell." We no longer live in that world. Many things have changed since 2000, not only the sentiments of the American people but the ways in which we organize. It seems clear from the hundreds of thousands of supporters behind groups like Scouts for Equality that there is an appetite for change. The question is whether those numbers can translate into meaningful support on the ground and whether that support will be enough.

Note: The image above pictures my Eagle award. The rainbow is a product of some artful photo manipulation. I suspect, however, it is only a matter of time before someone finds a supplier for an appropriately sized rainbow ribbon and writes a post on "How to Mod Your Eagle."