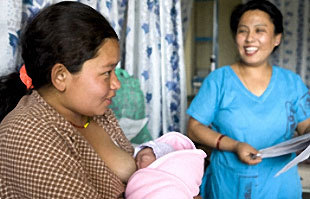 Exclusive breastfeeding is the best way to give your child a great start in life. We all need to do everything in our power to support women who want to breastfeed at any time and in any place, writes Dr Flavia Bustreo, Assistant Director-General of the World Health Organization.

A child's brain undergoes some remarkable changes in the first three years of life. Neural connections form more quickly than at any other stage as speech and language develop and the architecture and functionality of the brain are established.

The evidence for exclusive breastfeeding starting at birth as the basis of early childhood development is indisputable. Studies published in The Lancet earlier this year confirmed what we have long believed, that babies fed exclusively on breast milk for at least the first six months have the best chance of thriving through childhood and adolescence.

We now also know that exclusive breastfeeding can confer life-long advantages. The Lancet reviews found a clear link between extended breastfeeding and higher IQ scores and school attainment. Researchers found that this leads to higher earnings in later life - 12% higher per hour in high-income countries, and 16% in low- and middle-income countries.

Sadly though, the benefits of exclusive breastfeeding remain unrealized in many parts of the world. Just one in five children is breastfed for 12 months in high-income countries, while a third of children aged between six months and two years receive no breast milk at all in low- and middle-income countries.

This deprives millions of children of the opportunity for optimal physical and mental development. Individually, this may limit their ability to achieve their personal and social goals. Collectively, it has an enormous negative impact on society.

The Lancet studies also estimated that US$ 300 billion in economic growth is lost every year due to the unrealized mental capacity of children who are not exclusively breastfed as infants.

Decisions about when and for how long to breastfeed are intensely personal choices for every mother. However, we, as societies, need to become more aware of the benefits of breastfeeding - and do everything in our power to support women who want to breastfeed, whenever they need to, wherever they are.

Policy-makers could play a much greater role in this by improving legislation that supports mothers to exclusively breastfeed. This includes increasing maternity leave, strengthening the quality of care in maternity facilities to include lactation counselling, and protecting against aggressive marketing of breast-milk substitutes so that mothers can gain confidence in their breastfeeding abilities.

At WHO, we're working with countries to increase, by 2025, the rate of exclusive breastfeeding for the first six months up to at least 50%. To achieve this, the Global Breastfeeding Advocacy Initiative, led by UNICEF and WHO, in collaboration with international partners, is encouraging countries to implement the International Code of Marketing Breast-milk Substitutes, strengthen family leave and workplace policies, and improve access to breastfeeding support in health facilities and communities.

The Sustainable Development Goals (SDGs) also call for "access to quality early childhood development" for all boys and girls. This must include breastfeeding. To support achievement of the SDGs, the Global Strategy for Women's, Children's and Adolescents' Health recommends protecting and supporting exclusive breastfeeding for six months in all settings, including humanitarian and fragile - a cost-effective and easy intervention that contributes to a child survival, health and optimal development.

This autumn, a new Lancet series on early childhood development co-sponsored by WHO and UNICEF will be launched. We know currently that an estimated 200 million children alive today will fail to reach their full physical, mental and social potential because of negative factors that inhibit early childhood development, amongst them, not being breastfeed. The Lancet series will explore ways of applying scientific knowledge to help children get the best from their early years. Breastfeeding and ensuring proper nutrition will be a key component of this series.

We know the world is not as supportive as it could be for women who want to breastfeed, but we can change this. Supporting mothers to breastfeed any time and in any place is the first step to helping all children reach their full potential.