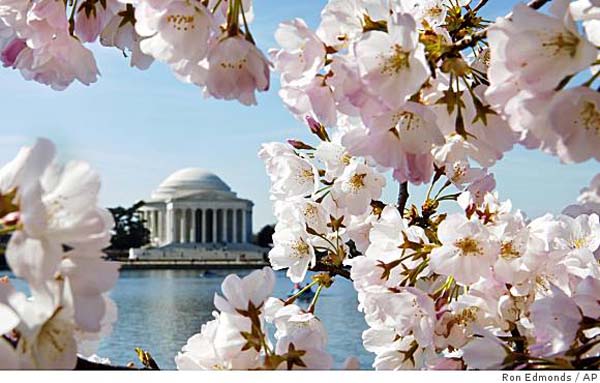 March used to come in like a lion and go out like a lamb. Now it comes in like a lamb and goes out like a mouse. Although the vernal equinox occurred last Tuesday, some parts of the country have been experiencing spring-like, even summer-like, temperatures for several weeks.

In fact, March temperatures have shattered records across the Central and Eastern United States and much of Canada. Nearly 850 U.S. cities and towns notched record highs from March 15 through 22, according to Hamweather. Chicago, which suffered a deadly heat wave in 1995, experienced record highs six days in a row, from March 14 through 19, with temperatures above 80 degrees.

Climate scientists call this phenomenon "spring creep." For quite some time they've been projecting that man-made global warming would make spring arrive earlier than normal, and it is--an average of 10 days compared with just 20 years ago.

So what's the big deal? After a long winter--mild or not--who wouldn't welcome an early onset of warmer weather, daffodils and, here in Washington, cherry blossoms? Isn't that a good thing?

The short answer is no. Before becoming completely intoxicated by spring fever, let's consider some of the drawbacks. True, it's not that difficult for people to adjust to spring creep--at least the fortunate ones among us who don't have allergies. But it's much more difficult for some plants and animals, and their success or failure could have a major impact on us.

Cherry-Rigged Blossom Festival. A hundred years ago, Japan gave thousands of cherry trees to Washington, D.C. Over the years, that gift blossomed into a major springtime tourist destination, now attracting more than a million visitors and generating some $125 million annually. The average date for peak bloom is April 4, but consecutive days over 70 degrees prompted the National Park Service to predict peak bloom would happen on March 20, the first day of spring.

Last week, the Washington Post ran a front-page story on a recent study by University of Washington scientists projecting that global warming could push peak D.C. cherry blossom bloom to early March within this century. A worst-case scenario of unchecked carbon emissions would trigger cherry blossom bloom as much as two weeks earlier on average by 2050 and a month earlier by 2080.

Lead scientist Soo-Hyung Kim and his colleagues, who work at the university's College of the Environment, recognize that such scheduling changes could cause headaches for the D.C. tourism industry, the capital's second largest. "Cherry blossom festivals of spring are culturally and economically important events," they wrote. "And successful planning requires that the cherry blossoms appear as expected within the festival period.

"Our results suggest that the timing of [peak bloom] and the window of the National Cherry Blossom Festival ... may mismatch toward the second half of this century."

The National Park Service is very aware of this problem and is investigating ways to ensure that festival dates match peak bloom.

Honey? I Shrunk the Choices. "Mismatch" is the key word. Besides disappointing tourists, scientists are finding that spring creep can create disconnects when some plants bud earlier and the wildlife that depends on them have not adjusted their internal clocks.

If you like certain kinds of honey, that means that you may be out of luck.

The tulip poplar tree is blooming earlier this year, for example, and bees, still on traditional bee time, may have missed their window of opportunity, said Jake Weltzin, an ecologist with the U.S. Geological Service and the executive director of the USA National Phenology Network, a federal program that tracks seasonal pattern changes. Meanwhile, the black locust tree, another major honey plant, is blooming on schedule, providing the bees with an alternative for nectar. "So this year, tulip poplar honey will not be available at your local farmers market, but black locust honey will be," said Weltzin. "But it's not as tasty as tulip poplar honey."

Invasives Win, Natives Lose. Climate mismatch also appears to favor invasive species over native species. Three papers, one published last month and previous ones from 2008 and 2010, found that to be the case at Walden Pond in Concord, Massachusetts. The papers contrasted the status of plant species today with how they fared in the 1850s as documented by Henry David Thoreau.

The February paper, by Boston University biology professor Richard Primack and Acadia National Park Science Coordinator Abraham Miller-Rushing, focused on 43 plant species. They found that "the plants in Concord, on average, are now flowering 10 days earlier than they were in Thoreau's time." Like the earlier papers, Primack and Miller-Rushing discovered that native plants that have maintained their historic flowering schedule are not doing well. These include many of the area's most "charismatic" wildflowers, such as dogwoods, lilies, orchids and roses. The two scientists concluded that 27 percent of the species Thoreau and others recorded in Concord are now extinct in the area, and another 36 percent of then-common species are barely hanging on.

Conversely, the study reaffirmed that invasive plants presently in Concord, such as the purple loosestrife, have the most flexible flowering dates and have shifted them to coincide with the earlier arrival of spring. That flexibility has allowed them to flourish at the expense of the native plants.

The findings of these three papers, which likely are emblematic of what is happening across New England and possibly the Mid-Atlantic, are significant given damages from invasive species across the country amount to more than $100 billion a year.

Time to Act. What can we do about this disturbing state of affairs? Unfortunately, even if we stopped all global warming emissions today, average world temperatures would continue to rise because carbon dioxide and other heat-trapping gases remain in the atmosphere for decades. So we are going to have to adapt no matter what. That said, we can avoid the worst consequences of climate change by dramatically reducing emissions. That would mean phasing out coal, oil and eventually natural gas and ramping up our reliance on renewable energy technologies and cutting energy demand through aggressive energy efficiency initiatives.

It can be done, and in a follow-on blog next month I will offer some suggestions on how we can cut our individual contribution to global warming.

It's time for all of us to spring into action, the earlier the better.