Early voting is nearly over. More people have voted early in the 2016 election, 46.26 million than in the 2012 election in its entirely, which saw 46.22 million. There are several states with incomplete or no reporting, so the raw number will only continue to climb.

What does this mean for overall turnout? Some of voters are clearly changing when they voted, opting to vote early instead of Election Day. However, the high level of early voting may also be a sign of increased overall turnout. Most likely a combination of the two are at play.

With many states reporting their near-final early vote numbers, here is my prognostication based on the early voting. You may disagree given the polls, and I very well may be wrong. There are several close calls and the lightly shaded states could go either way. I'm trying my best to remain true to what can be learned from the early vote.

I'm only concentrating on the battlegrounds that have early voting and have data that enable an analysis. I've reverted other states to their 2012 performance. There is not enough information about the early vote in Michigan, Pennsylvania or Wisconsin to make a prediction. Trump will likely need one of these states to win. (The map below was generated at 270 to Win) 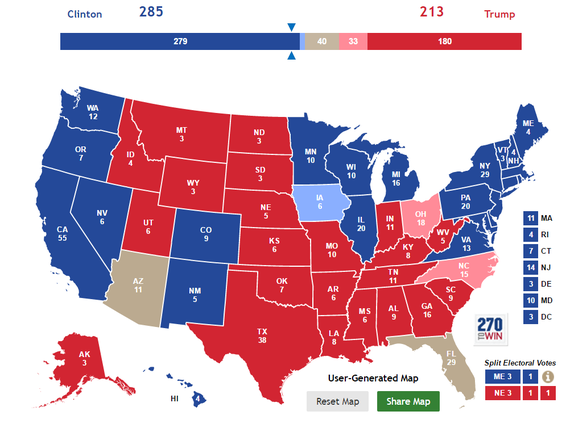 Colorado: Clinton
I might as well start with a state where the Trump campaign and I agree. The campaign sent a "memo" to supporters identifying Colorado as in the Clinton column. Colorado looks good for Clinton in the early vote data.

Colorado is a mail ballot state. All registered voters are sent a mail ballot which they can return via mail or in special drop boxes provided by election officials. In addition, in-person early voting sites are available where voters can do Same Day registration. This new system was adopted following the 2012 election, so 2016 is the first presidential election it has been in effect.

We don't have a good baseline presidential election, so let's look at the 2014 midterm election. In the 2014 midterm election, registration Republicans held a 7.3 point advantage in the ballots returned before Election Day, and the Governor and U.S. Senate elections were split by candidate of the two parties. (In 2012, Reps had a 1.8 point lead and Obama won by 5.4 points, which actually also yields a 7.2 point Rep lead to make the state competitive.)

It thus seems reasonable to me that Republicans need at least a 7 point registration advantage to be competitive. More Democrats will vote on Election Day and in this state, and many others, voters unaffiliated with a party tend to break towards the Democrats.

Registered Republicans hold a 0.7 percentage point lead over Democrats the day before the election, with nearly 2 million votes cast. The Republican lead is not enough, not even matching 2012. Like the Trump campaign says, Clinton is likely to win Colorado.

Nevada: Clinton
Nevada has concluded in-person early voting, with some mail ballots yet to be returned to election officials. We thus have a clear picture of early voting in a state where nearly 70% of the vote was cast early in 2012, and that number or higher appears likely for 2016 since early voting has already surpassed the 2012 total by 9.2%.

Nevada will be an interesting case study of the predictive power of poll averages versus that of the early vote. CNN released a poll with Trump leading by six points, dragging the poll averages towards Trump. One of the more astounding things about the CNN poll is that it estimates Trump has a one point lead in Clark County (Las Vegas), where registered Democrats have a 13.9 point advantage in the early vote. For the CNN poll to be true, there must be massive Democratic defections not present in Nevada polls (or elsewhere). More likely, CNN will learn what many pollsters have learned before: it is difficult to poll in Nevada.

Maine CD-2: Clinton
Maine splits its Electoral College votes, awarding one to the winner of each congressional district and one statewide. At the beginning of the early voting period, Democrats were off their 2012 levels, but they moved ahead following the first debate. Now, Democrats lead Republicans in the early vote by 7.8 points, whereas in 2012 they led by 6.4 points. Obama won Maine's Second Congressional district by 8.6 points. Clinton well-poised to win this Electoral College vote.

Virginia: Clinton
Virginia is not an early voting state, but its excuses are fairly permissive. In 2012, 11.6 percent of the Commonwealth's voters cast a ballot prior to Election Day. In 2016, 541,534 have done so - with some outstanding mail ballots - which is an increase of 20.9% over 2012. According to an analysis by the Virginia Public Access Project, much of the increase is coming from Northern Virginia, a Democratic stronghold, which is up 36.7% over 2012. This is the largest increase of any region of the state. There is thus nothing in the early vote to contradict the polling showing a Clinton lead in Virginia.

Iowa: Leans Clinton
Iowa is one of the few places in America where early voting levels are down from 2012. As of Monday, 42,584 fewer Iowans have voted early than 2012, a decrease of 6.3% from the same day in 2012. The decrease is primarily being driven by registered Democrats not showing up at the same levels of 2012. There are 21,744 fewer Democrats who have voted early in 2016 compared to 2012, while there are 2,765 more Republicans. More Democrats have voted early, but the Democrats' lead has shrunk from 9.9 percentage points in 2012 to 6.7 points in 2016. This is a 3.2 point shift towards the Republicans, or a raw vote narrowing of the Democratic margin by 24,509 votes.

As bad as Iowa has been for the Democrats, Clinton stands a reasonable chance of winning the state. Obama won Iowa in 2012 by 5.8 percentage points, or 91,927 votes. This gives the Democrats some cushion to give up relative to 2012. Shifting Obama's 2012 margin down by 3.2 points, yields a 2.4 point Clinton lead. Subtracting the Democrats' narrowed early vote margin yields a 67,418 vote margin left to give up on Election Day.

Iowa will likely come down to Election Day. Unlike some other early voting states, a majority of Iowans will vote on Election Day. In 2012, only 43.7% of Iowans voted prior to Election Day. The polls have not been favorable to Clinton, but some recent polls have a tie or a narrow Clinton lead. This will be a close state, and there could be a higher level of Democratic crossover votes here, but according to the early vote Iowa leans Clinton.

Florida: too-close-to-call
Florida ended its in-person early voting with a souls-to-polls Sunday. So far, 6.4 million Floridians have voted early, up 1.6 million or 34.1% from the 2012 4.8 million total, with still more mail ballots to be received by election officials. This increase is due to two factors: the state restored the first week of early voting chopped off in 2012 and the state now makes a mail ballot request good for up to two years, with some localities providing a request renewal on their ballot return envelopes.

Simple math would indicate a 2.4 shift in the early vote towards the Republicans would result in a 1.5 point win for Trump. However, there are good reasons to doubt the accuracy of that forecast. First, there is no way that turnout in Florida will increase by 1.6 million over 2012. This means that some Election Day voters, which leaned Republican in the past, have converted to early voters as the laws made it easier to vote early.

Second, diving down into the demographics available in Florida from my University of Florida colleague Dan Smith (@electionsmith), Hispanic early voting turnout is up an astounding 435,800 votes over 2012 (+86.9%). Since Hispanics tend not to register with a party, the increase among Hispanics is likely fueling the increase among early voters unaffiliated with a political party, which is up an amazing 184.3% over 2012 (yes, an 802,146 vote increase in 2016 over 2012's 434,249 unaffiliated vote). It is further noteworthy that a good portion of the increase of Hispanic early voters are coming from Central Florida, where a sizable Puerto Rican community is located.

My take on Florida is that there is too much uncertainty to make a call. If pressed, I believe the Hispanic early voting increase suggests Clinton has a very narrow edge.

Ohio: Leans Trump
In Ohio, jusy shy of 1.8 million have voted, which is below the slightly more than 1.8 million who voted in 2012. More mail ballot have yet to be returned, so it is possible Ohio will equal or exceed its 2012 early voting levels when all is said and done.

Ohio does not have party registration in the same way other states do, so the best that can be done is to compare early voting by counties. Democrats have been in the doldrums in Ohio, with Cuyahoga (Cleveland) and Franklin (Columbus) well off their 2012 levels by twenty percent or more. But in the last week Democrats turned it around. Relative to the same day in 2012, Cuyahoga ends the in-person early voting period the day before Election Day surprisingly up 1,051 (+0.4%) from 2012 and Franklin is up 22,522 (+10.2%). Unfortunately, I do not have complete 2012 data for the remainder of the state. For 47 other counties, early voting is up 89,040 (+13.3%) over 2012. I wish I knew more about who these voters are, but again, there is not a lot of information about them.

My read is that Ohio likely leans slightly towards Trump, but the state will be closer that it might have looked a week ago.

North Carolina: Leans Trump
North Carolina concluded in-person early voting on Saturday. Election officials have yet to receive some mail ballots, but with 3.1 million votes cast the character of the early electorate will not change.

Here are the wildcards that increase the uncertainty of what these party registration numbers tell us.

Finally, there is the large increase in unaffiliated voters over 2012. I suspect that these voters lean Democratic. However, they are not as strongly reliable as a person who registers with a party, so at best the Democrats can only make up some ground among these voters.

There is no public 2012 baseline available for Arizona's party registration, so I don't know what to expect. In 2016, registered Republicans currently have a 6.3 percentage point lead in the early vote. Maybe that is enough for Clinton if the voters unaffiliated with a party - who make up a little less than one-fourth (24.8%) of early voters - break towards Clinton. Maybe Arizona is like Colorado, in that a seven point lead for Republicans in the early vote yields a competitive election. Given the past history of the state, I'd give Trump the advantage, but there is not a lot to go on here.

Summary
The map I've outlined is not favorable to Trump. If Clinton wins Colorado and Nevada, Trump must win every battleground state and pick up a blue state. That's a tall order. Not impossible, but very difficult. Given that some of the key opportunities for Trump to win a blue state are excuse-required states with low levels of early voting - Michigan, New Hampshire, Pennsylvania, and Virginia - after all the early voting is done, the election will still come down to Election Day.