Early voting in recent American elections has skyrocketed, reaching a record thirty percent of all votes cast in the 2008 presidential election, remarkably higher than the twenty percent cast in 2004. All indications are the record will be shattered again in 2012, with somewhere around thirty-five of the vote cast prior to Election Day.

States vary their early voting options. Some states like Indiana and Texas allow persons to vote early at special polling locations. Some like Oregon and Washington, and some local jurisdictions, run all-mail ballot elections. Some like California and Colorado allow persons to request that they vote by mail in all future elections. Some like Ohio allow persons to request a mail ballot for any reason. Then there are a handful of holdouts like Pennsylvania and Virginia have traditional absentee balloting laws that extend early voting only to those who provide a valid excuse. Complicating definitions is that some states like Florida and North Carolina allow both early voting at special polling locations and no-fault absentee balloting. And where mail balloting is the primary method of early voting, voters can vote in-person at an election administration office. (I recommend seeking up-to-date voting information from state and local election officials.)

All states used to have what might be considered traditional absentee voting laws. The laws have evolved since. California was the first to adopt no-fault absentee balloting in 1980. Florida, Tennessee and Texas first opened special early-voting locations in 1996. Oregon adopted all-mail elections by a 1998 voter initiative. When early voting is tabulated by states, the national upward trend in early voting is located clearly among early voting states, although there has been a slight rise in early voting in states with traditional absentee balloting. The upward national trajectory is thus a combination of more states adopting early voting alternatives and increasing use among voters. Washington perhaps best exemplifies the love voters have for early voting. So many people signed up to permanently receive ballots that election administrators decided to dispense with opening Election Day polling places that were costly to run and empty. Colorado is nearing a similar tipping point. 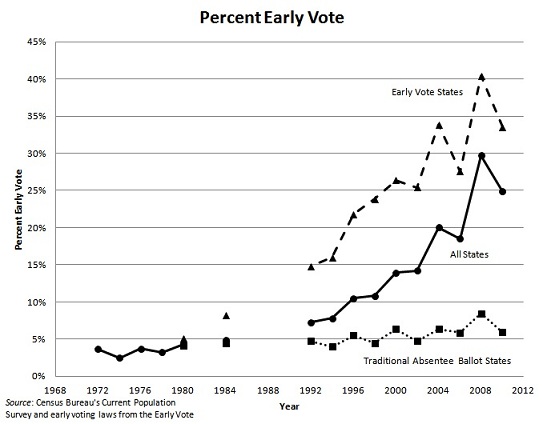 The campaigns have adjusted their strategies to the way people vote. Election administrators track the status of every registered voter -- whether they voted in-person early, and if they have a mail ballot in hand or if it has been returned. The campaigns scratch these voters off their target lists and refocus their efforts to those who have yet to vote. Once the election rolls around and you want the campaigns to stop contacting you -- vote early!

In 2008, the Obama campaign had an aggressive early voting strategy. They made early voting a part of their voter mobilization ground game and juiced early voting by other innovative means. Obama and Biden's travel schedule coincided with the opening of early voting in battleground states, rallies were held near early voting locations, and preferential seating was given to supporters sporting "I voted" stickers. For the cash-strapped McCain campaign in contrast, the candidates only belatedly began mentioning early voting in their campaign speeches the week before Election Day.

The Romney campaign is flush with money and will not repeat the McCain mistake of ceding the early vote to Obama. Already, early voting mobilization was a part of the campaign's primary election strategy. The Romney campaign's early vote forecasts in some key battleground states exceed the upward trend, and likely reflect that unlike four years ago both presidential campaigns will be aggressively mobilizing people to vote early.

Perhaps the most eye-opening Romney campaign forecasts are Florida and Ohio, two states that have recently been criticized -- and under a cloud of litigation -- for curtailing in-person early voting the weekend before the election. The campaign predicts a twenty percentage point increase in these states. A countervailing factor in Ohio is that the state will automatically send out absentee ballot request forms to all registered voters, where in 2010 only the most-populated Democratic leaning counties did so -- with a sizable mail balloting increase. Both states' forecasts also likely reflect the Romney campaign's commitment to early voting mobilization.

The Florida and Ohio policy changes purportedly narrowly target Democrats since conventional wisdom is the weekend prior to the election is when Democrats, particularly minorities, vote early as part of a church-led "pew to polls" mobilization effort. There is evidence supporting these claims.

However, the evidence is largely based on the 2008 election, which was an unusual election because the Obama campaign invested heavily in early voter mobilization and Democrats, particularly African-Americans, were excited to vote at the first opportunity for the first African-American general election presidential candidate. According to Census Bureau survey data, the normal pattern among early voters is that non-Hispanic Whites tend to make up a larger percentage of early voters that Election Day voters. Only in 2008 did minorities make a greater proportion of the early vote than the Election Day vote (77.0% to 76.5%). 2008 election surveys also confirm that more Democrats voted early than Republicans. The historical pattern reasserted itself in 2010. With the Romney's new commitment to early voter mobilization and with Republicans energized, the early vote will likely be more contested than in 2008.