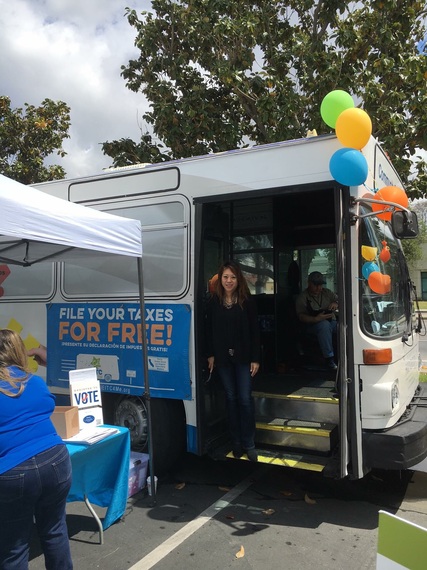 This past weekend, my staff and I went to Bakersfield and spent an afternoon helping folks prepare their income tax forms. I was there with the CalEITC4Me bus tour, which was stopping in Bakersfield before heading on to other Central Valley cities. Together with other Volunteer Income Tax Assistance (VITA) IRS certified tax preparers, we were there to help get the word out about California's new Earned Income Tax Credit (EITC), and to help the folks who came out get as much money back on their tax returns.

In total, 8 volunteers prepared 50 individual tax returns within 4 hours. Not bad for an afternoon's work, especially when you stop and think about how much money that afternoon will help the local economy in Bakersfield. So far this year, $157 million dollars in EITC credits have been claimed by 295,000 California families. That is money directly in their pockets.

That's why the Earned Income Tax Credit is so important. That $157 million dollars could buy 8,263 brand new Toyota Corollas. Or 744 houses in Bakersfield. Or school supplies for 249,200 kids. That is money we are investing directly into working families, helping them get ahead--and strengthening our whole economy.

But even the short time we spent in Bakersfield painted a clear picture for us: we need to make the EITC more effective. We found that the majority of taxpayers who qualified for the federal Earned Income Tax Credit (EITC) did not qualify for the new California EITC credit because they earned more than the threshold amount.

The maximum you can earn and still qualify for the EITC, with W-2 income and one child, is $9,880. That's just too low for California. I hope the successes we are seeing this year will spur the Legislature to increase the income levels to help more low-to-moderate earning families next year.

I want to recognize the hardworking efforts of the CalEITC4Me campaign, a public-private partnership developed by entrepreneur Joe Sanberg who stepped up to bring much needed resources to make implementation of this new program possible, and serve as it's Chair.

Not only has he personally contributed, but also fostered partnerships with the Governor's Office, legislative leaders, the Franchise Tax Board and other state agencies, along with businesses like Intuit that developed tools like the Calculator, labor unions who educate their members, as well as hundreds of community organizations, especially United Way, who are working on the frontlines to get the word out about the CalEITC.

To date, the campaign has distributed hundreds of thousands of dollars to increase the capacity of VITA sites to serve working families. That is especially critical in ensuring that those who are eligible for free tax prep do not pay upwards of $200 to file their taxes--we want to make sure no one leaves any money on the table.

This effort continues as we count down to Tax Day on April 18th. I look forward to joining them again in Ceres this Saturday, April 16! Filling out tax forms can be difficult even for the most experienced professionals, and having folks volunteer to help working parents claim all the credits they're eligible for can make a tremendous difference in their life.

We have now joined 25 other states who offer and EITC to their residents, and almost half of the $380 million dollars set aside by the Governor for the EITC has already been claimed! We owe a big thanks to the United Way, who have helped us reach a substantial segment of the estimated 600,000 California families who would qualify for the EITC if they filed their tax returns.

It can help them get a new car, start a new business, pay off credit card bills, or defray some of the costs of college for their kids. The dedicated VITA tax preparers who I worked with this weekend are doing amazing work for California, and I look forward to partnering with them again next year as well!

Find out about the tour, and CalEITC4Me's efforts at: www.CalEITC4Me.org