Délek Dölma left her home in Kham in Tibet's eastern regions at the age of 20. Ordained but illiterate, she yearned to study Buddhism in a more profound way. Délek Wangmo was 16, also ordained, could barely read but was equally determined to deepen her knowledge and understanding of Buddhism. In traditional Tibetan society, when it comes to opportunity to study, nuns are at the bottom end of the priority list. Painfully aware of the fact that in Tibet they hardly stood a chance of studying, much less achieving a scholastic degree, they resolved to escape to India to pursue their dream within the Tibetan community in exile.

They also resolved to generate the "merit" -- which in Buddhist terms refers to the expansive power of the mind generated by virtuous acts -- for this bold undertaking in a uniquely Tibetan way. They journeyed from Lithang to Lhasa by doing full-length prostrations the whole way. To get an idea of what that entails: with your mind focused on the Buddha first you do a full-length prostration flat on the ground, with arms out, then stand up, and then move to the mark where the tips of your fingers touched the ground. And then you start again. Repeat for as many times as it takes to cover 1,475 kilometers. It took them a year and a half.

It would seem the merit they generated helped: once in India they were soon taken under the wing of the Tibetan Nun's Project created by the Tibetan Women's Association to provide education for nuns. By 1993 they were both were inscribed in a long-term study program, the first of its kind. In 2005 the Dolma Ling nunnery, spearheaded by His Holiness the Dalai Lama's sister-in-law Rinchen Khando, opened its doors. To date over 200 nuns have joined the two in this nunnery. 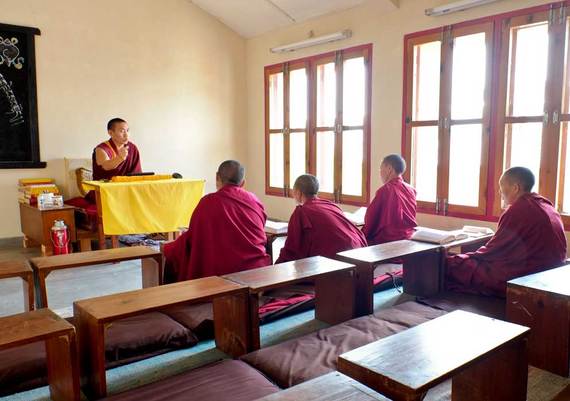 A philosophy class at Dolma Ling nunnery, via Rio Helmi

At Dolma Ling the nuns receive intensive education on the subjects which monks at the great monastic colleges of Drepung, Ganden, and Sera receive. The program requires about 17 years of rigorous study. And of course prior to tackling these, the two nuns had first to learn how to read and write fluently in Tibetan as adults.

At the end of the study programs, after three annual exam sessions and one final exam which includes a grueling debate session, monks in monastic colleges that pass are accorded the title Géshé, which derives from two Tibetan words: gé-way meaning virtuous or wholesomely positive, and shé-nyen or friend. For nuns, herein lies the rub.

In Tibetan Buddhist tradition the lineage of full ordination for nuns, gelong-ma, (bhiksuni in Sanskrit) the equivalent of the male gelong (Sanskrit bhiksu), never reached Tibet so Tibetan nuns are in fact novices (getsulma or samanerika in Sanskrit). His Holiness the Dalai Lama has been very keen to establish the full ordination lineage for the nuns in Tibetan tradition. At his request, the Department of Religion and Culture of the Tibetan Government in exile has done extensive research on this issue for many years. While H.H the Dalai Lama has always been supportive of their cause, unlike the Pope in the Roman Catholic tradition he has no absolute authority to simply issue an edict. To be valid, the process has to be done in accordance with the vinaya, the monastic code of conduct. The matter has not yet reached resolution.

Related to this, there was a general perception that the rigors of the géshé studies would prove too difficult for nuns. Despite this, Rinchen Khandro and her colleagues pushed on with the education program, buoyed in part by the support of HH the Dalai Lama, who a few years ago publicly signaled his support for the géshé degree for women.

While the winds of Tibetan monastic politics huffed and puffed around them, Délek Dölma and Délek Wangmo kept their focus on their education. Then a statement by the Dalai Lama in 2012, the result of much discussion within the monastic institution, finally resolved the géshé issue for nuns. Délek Dölma tells me through my interpreter for the day, Lobsang Dechen, co-director of the Tibetan Nuns Project: "Of course when HH the Dalai Lama gave his blessings for the women's géshé degree I was happy, because it opens opportunities for us to teach other nuns. But even before that possibility seemed likely, the real reason I studied is because it is useful for the mind."

In a separate interview, Délek Wangmo echoes her sentiments: "Most importantly study offers me a good opportunity to learn from the great treatises how to help others."

To avoid any doubts as to the quality of the nuns' education, Rinchen Khandro's team and the Department of Religion and Culture arranged for highly qualified invigilators in this field to preside over the nuns' géshé exams. In short, the highest standards were applied. And all the géshés involved were impressed: "We didn't think they would have studied so well". Next year come the final exams, which will produce the first batch of géshés to come out of the project.

I ask these nuns which of the events in their lives, whether facing the géshés during the exams, the discrimination towards them as nuns, or perhaps their escape from Tibet, was the most difficult thing they faced. Délek Dölma laughs quietly: "Actually the most difficult thing was trying to understand Nagarjuna's text on Madhyamaka (The Middle Way, an exposition of the Buddhist view of reality)". Délek Wangmo expresses the same thought, and adds: "I never had any doubts about what I was doing, even when it was difficult". 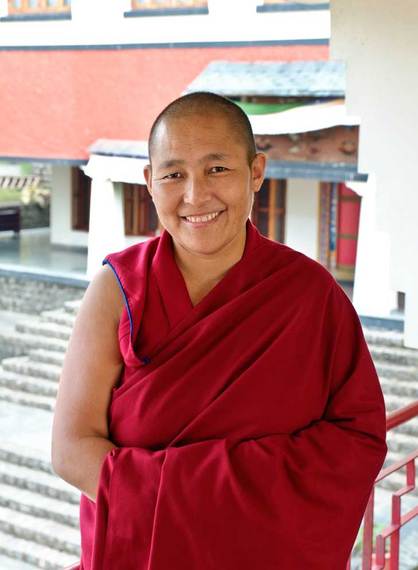 Délek Dölma on one of the walkways above Dolma Ling's main courtyard, via Rio Helmi

Both these nuns have Délek as their ordination 'first' name because they were ordained by Tenzin Délek Rinpoche, who died in Chinese police custody recently under suspicious circumstances. While the title géshe was never Délek Dölma's main goal, she says of it: "Besides it of course giving me extra confidence, I would like to make this an offering to my lamas, to my teachers, to all the géshes who taught us."

When I ask what her plans were after getting her degree, Délek Wangmo, says: "The study has helped me to learn how to control my emotions. I have no precise plans, but I want to use what I have learned to help others." She sits quietly, slightly uncomfortable with the attention, as I do a portrait of her in her simple nun's room. When I wrap up, she spontaneously takes a plate of fruit from her desk and offers them to me. I take an apple, silently marveling at her unassuming humility and genuine equanimity despite being so close to achieving the culmination of 26 years of dedicated hard work. 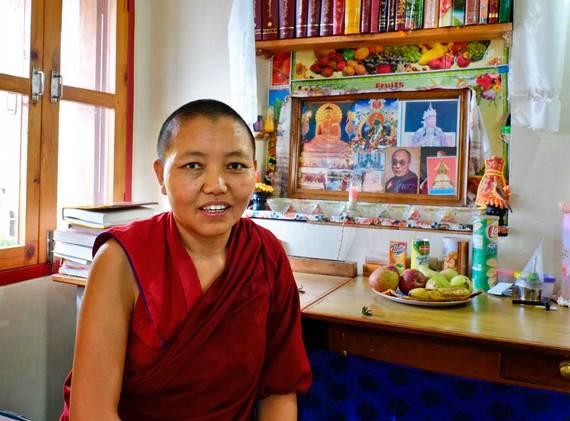 Délek Wangmo in her room at Dolma Ling, via Rio Helmi