In the abraded heart of South Africa's Vredefort impact crater lurk striking green-black rocks, some of the only remnants of a magma sea that once filled the gaping crater, according to a study to be published this May in the journal Geology. Until now, geologists thought nearly all of these "impact melt" rocks were lost to time. Some 6 miles (10 kilometers) of Vredefort crater has worn away since it was whacked open 2.02 billion years ago.

"It's like discovering a new rock type in the Grand Canyon," said study co-author Desmond Moser, a geochronologist at Western University in Ontario, Canada. "Vredefort has been walked over for 100 years."

A separate study in the same issue of Geology reports the best evidence yet for possible Vredefort impact ejecta. The vaporized beads of rock were blasted into the atmosphere and rained down 1,550 miles (2,500 km) away, on a proto-continent that became northwest Russia and Scandinavia, the researchers said. [Crash! 10 Biggest Impact Craters on Earth]

"I think this is a definite step forward in trying to understand the top of the Vredefort structure," said Matthew Huber, lead author of the second study and a planetary geologist at the University of Brussels in Belgium.

Off with its head

The ancient Vredefort impact structure was once a much bigger crater, about 185 miles (300 km) across, scientists estimate. The asteroid or meteor that hit proto-Africa was 6 miles (10 km) wide and excavated a hole 10 times deeper than the Grand Canyon, Moser said. The impact's tremendous heat melted the Earth's crust, creating a magma lake. Moser and his co-author Lisa Cupelli have also explored the remains of a similar molten sea at Ontario's Sudbury crater, which is just slightly smaller and younger than Vredefort.

At Vredefort, little of this impact melt lake remains. There are messy impact-related breccias, formed as slices of crust slumped into the crater just after impact. The slices slid so fast that the resulting friction melted rock into glass called pseudotachylite. There are also lava-filled fractures called dikes, stuffed with a rock known as granophyre, forged from fingers of the impact melt that penetrated the local rock.

But Moser made a lucky find in the 1990s in the center of the crater. He was trying to pin down Vredefort's age when he accidently discovered pristine, 2.02-billion-year-old zircons — tiny minerals with no signs of violent shocks. The zircons were stuck in rare, magma-filled dikes. The dikes burrow through ancient crust once buried 12 miles (20 km) deep in the Earth. Moser thinks partially cooled magma leaked into crustal rocks that oozed in like toothpaste to plug the crater, creating the layered foliation. (The crust rose up like a dome — picture the slow-motion videos of a raindrop hitting a bowl of water.)

Moser published his discovery in Geology in 1997, and immediately sparked a battle over whether the dikes, filled with a rock called gabbronorite, were truly remains of Vredefort's impact melt. That battle continues today. Some researchers objected because the magma had an unusual layered appearance called foliation, common in altered rocks. Perhaps it was simply another pseudotachylite, or part of the Earth's original crust, the critics said. Others suggested the young zircons could have crystallized in pre-existing rocks from the impact's heat. [Photos: The World's Weirdest Geological Formations] 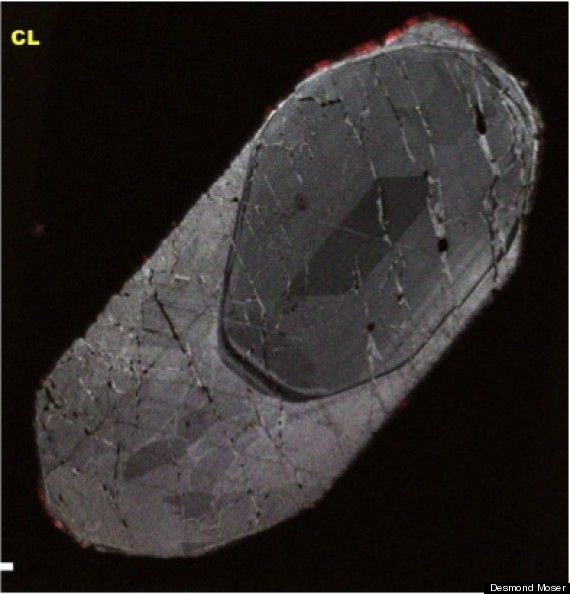 A 3-billion-year-old shocked zircon that survived the Vredefort impact.

So Moser and Cupelli recently returned to South Africa and searched for definitive evidence that the magma dikes were as young as the crater itself.

"I wanted to put away all the doubts that this was impact-related," Cupelli said.

Now Cupelli, who led the new study, thinks the team can prove the magmas were born in Vredefort's impact melt. The zircons are randomly distributed and interlaced with their surrounding minerals — they couldn't have grown from the heat of impact later than their neighbors, she said. The zircons also crystallized between 1,337 to 1,702 degrees Fahrenheit (725 to 928 degrees Celsius), hotter than normal on Earth, but the same temperature as in Sudbury's impact melt.

Finally, levels of the element hafnium suggest that the magma melted from the 3-billion-year-old rocks originally overlying the crater (the same sedimentary and volcanic rocks in nearby Witwatersrand Basin), not from the very deep crust now exposed by 2 billion years of erosion.

The new study has already kicked off a search for Moser's rocks by other Vredefort researchers, who hope to confirm or deny the results. [Earth Quiz: Do You Really Know Your Planet?]

"I think the final solution to this dilemma is still out there," said Uwe Reimold, a professor at Humboldt University in Berlin and director of the Museum für Naturkunde. Reimold is firmly in the anti-impact-melt camp, though he praised the study's zircon chemical techniques. "I still think this is consistent with an interpretation as a pseudotachylytic breccia," Reimold said. "I have not changed my mind." 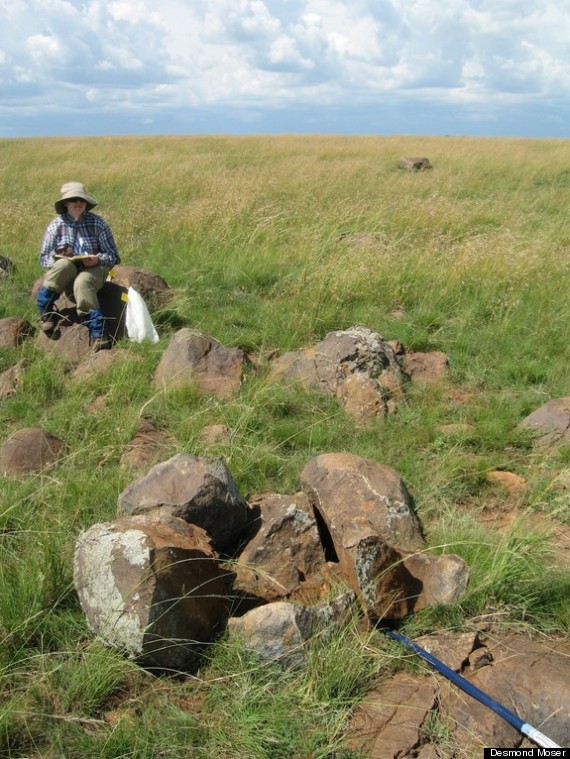 Lisa Cupelli at an outcrop of gabbronorite at the Vredefort impact crater.

But Moser thinks the unusual appearance of Vredefort's impact melt could also help researchers search for older impact craters, which have been confirmed only through discovery of impact ejecta. Impact beds go back to 3.5 billion years, but confirmed craters end with Vredefort. Yet there are very old rocks with similar compositions and textures, such as the distinctive layering of Vredefort's impact melt, scattered across the Earth, the researchers said.

"What Vredefort teaches us is that we haven't been looking with the right set of eyes at some of these ancient rocks," Moser said.

The right set of eyes was key in finding Vredefort's impact ejecta in Karelia, Russia. The vaporized rock had originally been identified as ooids, which are tiny spheres of calcium carbonate that usually form in shallow tropical seas, such as the Bahama Banks.

But Huber noticed a resemblance to round impact glass (called spherules) and asked for permission to examine the rock samples: two drill cores acquired during the Fennoscandian Arctic Russia–Drilling Early Earth Project (FARDEEP).

"We quickly found evidence that these were impact spherules," Huber said. "We started finding some dumbbells, and some that were completely pulled apart into a teardrop shape, which is completely impossible for ooids."

The impact glass is completely replaced by minerals such as calcite and pyrite, but rare, space-linked elements such as platinum and ruthenium remain. The glass is scattered in rock whose age ranges from 2.05 billion to 1.98 billion years. That span means there's a chance a different impact could have blasted the spherules into the sky, but they do match the expected characteristics of a Vredefort-like event, Huber said.

"We're hoping to do more geochemistry on these particular rocks to try and nail down even further what the source would have been," Huber said. Future plans include trying to figure out what kind of space hunk smashed into Earth, and comparing the spherules to Vredefort's unique mineralogy.

"I hope this inspires people to look more carefully at their rocks," he said. "It's really important to look for these fine details to better understand the cratering history of the Earth."