INDIANAPOLIS — Our home in the Milky Way could be much larger than ever thought before, according to a new study.

Astronomers using the National Science Foundation's Very Long Baseline Array (VLBA) found that the area of the galaxy that holds Earth and the rest of the solar system is a prominent feature of the spiral galaxy.

The solar system exists in a part of the galaxy known as the Local Arm. Until now, scientists thought that this particular part of the Milky Way was just a tiny spur between two large branches known as the Sagittarius and Perseus arms.

"Our new evidence suggests that the Local Arm should appear as a prominent feature of the Milky Way," Alberto Sanna, of the Max-Planck Institute for Radio Astronomy said in a statement. Sanna presented these findings at a news conference during the 222nd meeting of the American Astronomical Society. 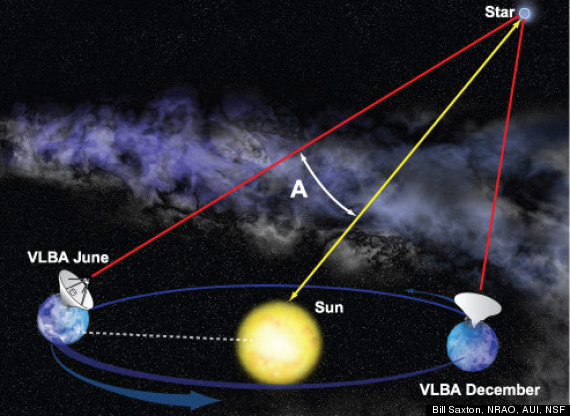 Trigonometric Parallax method determines distance to star or other object by measuring its slight shift in apparent position as seen from opposite ends of Earth's orbit.

Scientists can't be sure what the Milky Way galaxy truly looks like from the outside, because we are stuck within it. Researchers have to measure distances between objects in the Milky Way to understand exactly where something might fit within the context of the rest of the cosmic neighborhood.

"Based on both the distances and the space motions we measured, our Local Arm is not a spur," Sanna said."It is a major structure, maybe a branch of the Perseus Arm, or possibly an independent arm segment."

The new research, which uses data collected between 2008 and 2012, used simple trigonometry to understand the placement of the solar system in relation to the rest of the galaxy.

"By observing objects when Earth is on opposite sides of its orbit around the sun, astronomers can measure the subtle shift in the object's apparent position in the sky, compared to the background of more-distant objects," National Radio Astronomy Observatory officials wrote in a statement. "This effect is called parallax, and can be demonstrated by holding your finger close to your nose and alternately closing each eye."

Scientists used parallax to measure the distances to star-forming regions of the Milky Way, because methanol and water molecules there boost radio waves (like those used by the VLBA), making it easier for researchers to collect accurate data.

Advertisement
Copyright 2013 SPACE.com, a TechMediaNetwork company. All rights reserved. This material may not be published, broadcast, rewritten or redistributed.
Go To Homepage