Earth Day, celebrated on April 22nd in the United States for the last 46 years, celebrates and promotes awareness of the delicate balance of the ecosystem. It fosters cognizance about consumption and conservation of resources. Earth Day events demonstrate techniques for generating green energy; reusing and recycling everyday household items; growing plants for a healthy ecosystem, inside and out; and provide education about how much water it takes to make the world livable, much less beautiful.

The above sentence is a fair description of life on simulated Mars. By necessity and by design, we scrimp on water, save on power, and recycle anything that could possibly have a use. This is an all-day, every day event. 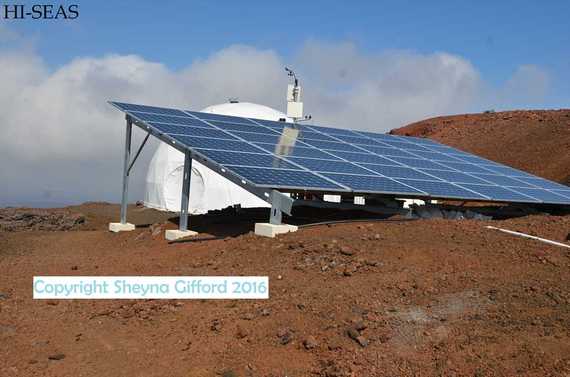 Every day on sMars, the crew currently uses an average of 26.1 gallons of water. That's a team of six people using 26 gallons a day for all of our coffee, tea, food, laundry, personal hygiene, plants, EVA-suit cooling, and cleaning of the dome. That's 5 of those garish 5-gallon buckets filled to the brim, plus a gallon jug, plus a 13 oz glass. That's...not a lot. As I've mentioned in previous posts, we get away with using so little largely because we don't use flush toilets. Also: because we try really hard NOT to waste water. We do laundry once a month or we do it by hand. We don't use the dishwasher. We take 2-minute showers once a week. After water has been used in EVA suits, it's used for dishes or plants. These days, we also get plant water from the ground outside, via a nifty solar-still design from our chief science officer. The sun shines on some plastic, which heats the ground below. Water in the ground evaporates into the still, then recollects. Voila: we can feed our plants without turning the tap! Lastly, we run "water emergency days" a few times a month. On those days, we turn off the taps for 24 hours and measure how much we use, for what, and when. 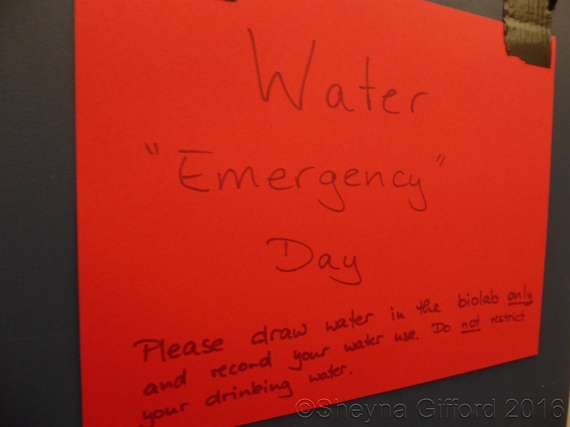 Water emergency days are real eye-openers. One recent water emergency fell on my cooking day. I watched in horror as I went through half a five-gallon bucket cooking and cleaning up from three meals - re-hydrating food and doing the dishes - and making bread, cheese, and yogurt. That's 2.5 gallons put towards feeding 6 people for a day, and beyond, with all the bread and cheese. It's not a lot conceptually. Then you watch as the bucket slowly empties, and you feel a sense...well, I felt a sense of being a waster - which, on Mars, is just about the worst thing you can be.

The lesson to be learned from Mars, on Earth, is that everything has a value: somewhere, somehow. If that value isn't apparent, we haven't applied ourselves to discovering it yet. It's that simple. 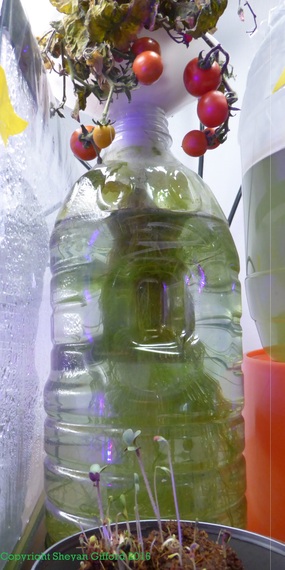 On sMars, we couldn't get along without our "garbage".

That old tuna can? That's the base for my growing plant. Giant empty pretzel jar? Indispensable. When we get pretzels, we decant them into bags because the JAR has more immediate and long term value. We use them for everything from growing potatoes to filtering water and holding dry goods. Anything made of glass is a priceless object - triple that if it comes with a lid. We need these things to live: to grow plants we eat and bacteria that turn rocks into usable soil; to culture foods like kombucha. I remember distinctly near the beginning of the mission we were looking for ways to keep our medical devices from sticking to the bed of the 3D printer. Mission control's recommendation was, "Take a glass jar with a lid, fill it with acetone, and..." the laughter began. At the time, there were a grand total of three glass jars on sMars. Each of the three was actively doing something to help keep us alive - fed, breathing, hydrated - and happy now and in the future.*

When you think about it, the very concept of "garbage" is a function of having too much stuff, too little space, not enough time, and/or inadequate technology. Every day we discard plastic bottles by the ton. Plastic bottles can be used to make houses, lights, and, if you melt them down and re-form them, a million other needful things. We throw away apple cores, banana peels, and burnt toast. Throw those in a big bin, add a bunch of leaves and twigs, rotate it occasionally (or seal it and add microbes) and you'll get BACK the nutrients you need to make more apples, bananas, and bread. We throw away the bottles and the burnt toast because there's always more bottles, and always more toast. Except in places where there isn't. Places like poor areas on Earth. Like interplanetary space. Like Mars. 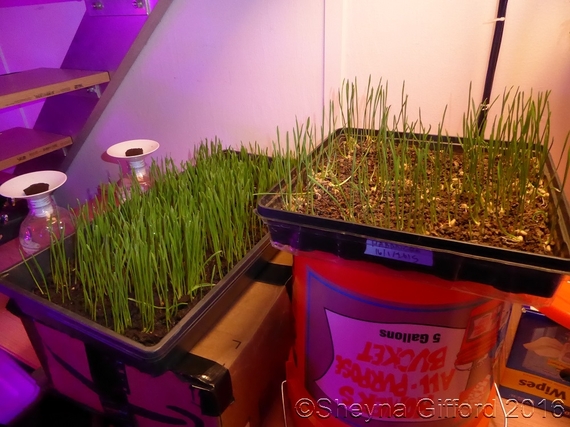 We don't have garbage on sMars - or, rather, we shouldn't. We wouldn't if we had the facilities to melt and reform plastic; if we were able to build more structures - greenhouses made of bottles and cans that we could fill with the nutrient from our leftover food. As it is, we're shocked by the fact that our group of six fills up a single 13-gallon garbage bag once a week. We're equally shocked that we fill one 56-oz can with coffee and tea grounds and another with food scraps every week. If we had the space, we could put all of that to work for us. We would be putting all of it to work for us, the way we do the glass jars, tuna cans, and plastic pretzel tubs. Sadly, space is at a premium in space. As is time. We have to get so much done every day, just to keep the habitat running; keep our experiments running; keep ourselves running. 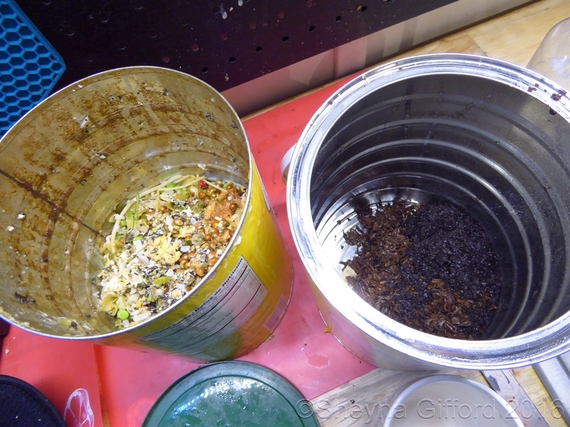 On Earth, you have the space. We know how hard it is to find the time - truly, we do. There are a few things that can help, though - make Earth a better place, and even make your own life better. That's what Earth Day is about, if nothing else. I think: your life, simpler, better, richer. It's about little things, like light bulbs. The light bulb burning above me as I write this blog post uses 5 watts an hour. If I were back at home on Earth, using this bulb would save me money, simple as that. Simple as that for you, too. One bulb - which will be more expensive than the kind that burns out in a year, but probably last so long that you'll move it when you move - will cost less in the end than that cheap, long-dead bulb you used to have. Water bottles work the same way - plus, they increase the odds that you'll drink water. Saves money and makes you healthier. Your life gets better by virtue of bottles and bulbs, and so does the world. Slowly, sometimes exasperatingly slowly, but at least it's a start. 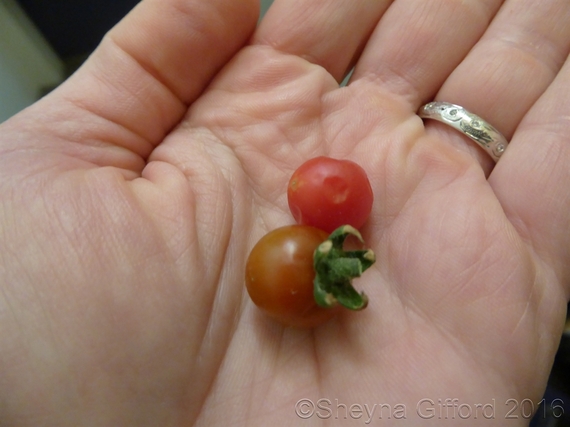 It took months of collecting water, Sun, and nutrients to grow these.

Here on sMars, we don't have a cash economy. Our gold standard is a sunny day. With the aid of sand, glass, and a lot of wiring, we get our power straight from the Sun. A sunny day means we can cook, run on the treadmill and re-transmit photons from the Sun onto our plants, which will later give us food. A sunny day means that I can move some electrons that were made million of miles away, and would have fallen on bare rock were it not for our solar panels, from a bank of batteries into my tiny bunk room, into a 5 watt bulb that burns so brightly that I have to keep it covered with a rolled-up piece of paper. That's gold in space: power enough to eat, to exercise, to wash clothes, and to stay up after dark sending messages to the people we left behind. 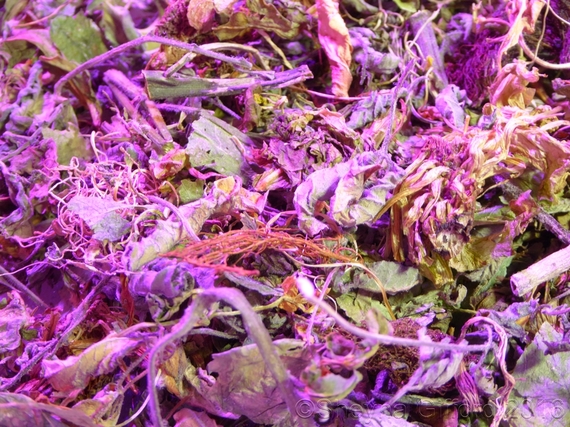 This is both past and future food.

If nothing else this Earth Day, we can look around and wonder at the value of things. The pasta in your pantry; the sweaters piled high in your attic or basement; lost food lingering in your garbage can. The ability to flip a switch and have the lights come on at once. All of these ordinary things have an immense, almost incalculable value when you consider how much it took to bring that thing to you where you are standing right now. All power and water it took to grow the wheat, gather it, process it, turn it into pasta, package and box it and put it on the shelf where you found it. Then, you put it in a bag and transported it home. Expending energy this way is is an amazing feat - one that's new to the last century or two. It takes tremendous resources for us to live the way that we do on Earth today, in the United States, and most of Europe, and many parts of Asia. From our homes on these continents we light up the world, all day, every day. We can see it from space. That light is energy we could be putting into something else if we wanted to. We could turn it into pasta, or feed for animals whose wool can be used to make sweaters, or power for trucks that pick up household waste and take it somewhere to be re-used.

Every day on simulated Mars when I reach for a light switch I have to think about whether I want to use the power on this or something else. After all, there's only so much to go around. This Earth Day, if nothing else, look around all the places you are putting time, money, and energy, and decide if that's what you really want to be doing with it. It's your planet, after all. So far, the only one we've got. Whether or not we make it to Mars in my lifetime, Earth is the only planet that will be giving us pasta and sweaters, and even garbage, for a long time to come. 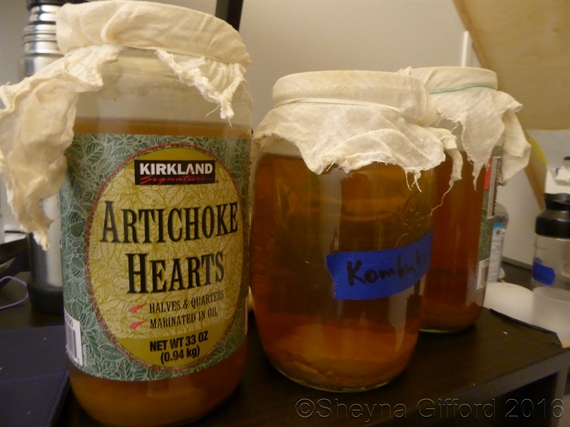 *We ended up using an old metal can with a lid - formally the home of some powered milk - to make a slurry that we used to keep printed objects from sticking to the bed.