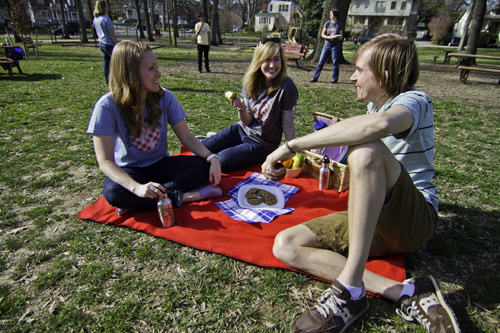 I am usually a pretty optimistic guy, but twice a year, like clockwork, I get depressed. The first is in December, on my birthday, and the story involves my childhood, a birthday cake and a monkey that (supposedly) stole it. The other is on April 22nd, also known as Earth Day.

As an environmentalist, my expectations are always sky-high, and yet the day goes on without much fuss. Except for a few obligatory anemic programs on network TV and a green cover on a few glossy magazines, you would never know of the day's passage. Sure, my friends in the movement do try and organize, prompt some mass collective action, protest a pipeline or turn off the lights at a chosen hour, but in the end, the biggest green event each spring is always going to be St. Patrick's Day. (Hey, we should've thought of green beer first!)

And the worst part? The state of planet is not really getting any better. It's like contemplating attending a wake for a distant relative who no one knew and everyone feels slightly bad about... but not enough to actually show up for the cheap catering.

I recently participated in "Creating the Next Conservation Movement ... Or Do We Even Need One?" -- a panel discussion co-hosted by The Nature Conservancy and the New York Academy of Sciences. Two of my fellow panelists, Ted Nordhaus and Michael Shellenberger of the sometimes cantankerous, but always smart Breakthrough Institute, declared that technological innovation is the key to solving global environmental crises, and the best way forward for a planet of seven-billion-plus is direct government investment in green technology. Massive investments -- not green awareness -- are what we need the most, they seemed to argue, to innovate our way through the mess we have created.

I don't entirely disagree. Large-scale action -- like legislation, corporate practices and government investment -- are critical to designing a different future.

But I am not ready to jettison the significance of personal action.

Over time, small personal actions can evolve into cultural consciousness shifts. Consider this scene from Mad Men, in which the (seemingly) happy Drapers head outdoors for a picnic. When it's time to go home, the family packs up their gear, Don launches a beer can into the ether and Betty shakes off the blanket, scattering their trash in the grass.

But who does that now? I bet most viewers under the age of 40 or so were stunned by the Drapers' behavior (more so than the three-martini lunches and all the sleeping around). These days, in this country, littering is just not socially acceptable, it's also a crime. That's quite a shift in just about a generation -- a shift that has not only kept our public spaces cleaner, but changed the way we think about our actions.

Or think about it this way: The rate of children contacting certain diseases like smallpox, polio or rubella is exceedingly small because of parent's individual decisions to vaccinate their kids. Small decisions have virtually eradicated several major threats to collective health.

Small actions are clearly not sufficient on their own, but they are necessary. They prime you to other bigger, more difficult ideas and trade-offs. Someone who won't recycle (a simple action) will likely not show up on the streets demanding a stop to an oil pipeline or bother to vote for policies that support that massive investment in clean technology that the pundits demand. In some ways, they reverse engineer you into being an environmentalist.

At a time when few Americans identify as "environmentalists" or "conservationists," I believe that there is a role for everyone, and that everyone ought to play a part -- even if it's a small part. That's the idea behind All Hands on Earth, a new campaign from The Nature Conservancy that seeks to spread the word that your actions do matter.

And this Earth Day, instead of stressing about what I am going to do and dealing with the accompanying guilt, I am going to do something fun and very simple. I am going on a picnic: a Picnic for the Planet. I am going out with friends into nature, eating something local, something organic, food that connects us very directly to the land and water that sustains us all. Who can say no to a picnic? It's a great chance to not only enjoy nature, but also begin a conversation about nature. And though we may not have invented green beer, it's another opportunity to drink a seasonally appropriate, organic green beverage.