An international team of researchers has discovered one of Earth's deepest, darkest secrets: our planet's inner core -- once thought to be a ball of solid iron -- has a hidden inner core of its own. And this so-called "inner-inner core" seems to have some very peculiar properties.

“The fact that we have two regions that are distinctly different may tell us something about how the inner core has been evolving,” Dr. Xiaodong Song, a professor of geology at the University of Illinois and co-author of a new paper about the discovery, said in a written statement. “For example, over the history of the earth, the inner core might have had a very dramatic change in its deformation regime. It might hold the key to how the planet has evolved. We are right in the center -- literally, the center of the Earth.” 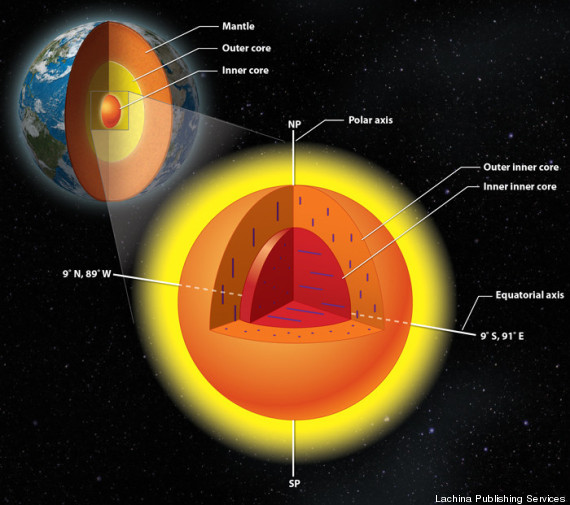 An illustration of the earth’s inner-inner core, which has crystals aligned in a different direction than the inner core.

For their study, the Illinois researchers and their counterparts at China's Nanjing University measured how seismic waves resonated and traveled through the earth in the aftermath of earthquakes that occurred between 1992 and 2012. Analyzing an earthquake's coda (the train of seismic waves that follow that quake) offers clues about what's inside Earth.

“The basic idea of the method has been around for a while, and people have used it for other kinds of studies near the surface. But we are looking all the way through the center of the earth," Song said in the statement.

"People have noticed differences in the way seismic waves travel through the outer parts of the inner core and its innermost reaches before, but never before have they suggested that the alignment of crystalline iron that makes up this region is completely askew compared to the outermost parts," Dr. Simon Redfern, a professor of Earth Sciences at the University of Cambridge in England, who was not involved in this research, told BBC News. "If this is true, it would imply that something very substantial happened to flip the orientation of the core to turn the alignment of crystals in the inner core north-south as is seen today in its outer parts."

The study was published online in the journal Nature Geoscience on Feb. 9.

What else is inside Earth? Take a subterranean tour in the "Talk Nerdy To Me" video below.