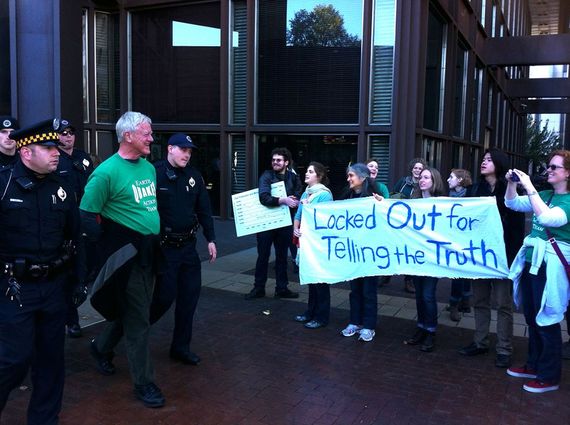 Spirits were high on Monday, October 21 as seven representatives of Earth Quaker Action Team were lead away by Pittsburgh police for refusing to stop speaking out about PNC Bank's financing of mountaintop removal coal mining, a destructive practice that causes cancer and birth defects in Appalachia. The arrests capped an escalating wave of actions that affected more than fifteen PNC branches on the final day of PowerShift 2013, which included thousands of young climate activists from across the country.

Billed as "the biggest bank branch action in history," Earth Quaker Action Team (EQAT pronounced "equate") began the morning with "Silent Occupations" at ten PNC branches around the city, then disrupted the bank's lunchtime business at several downtown branches before the "Tell the Truth" action where the seven who committed civil disobedience outside of a locked bank ranged in age from 21 to seventy-five. The day marked another step in EQAT's escalating campaign to get PNC to stop financing mountaintop removal coal mining, while modeling rapid-fire escalation for youth at PowerShift.

EQAT was founded on a belief that to win a just and sustainable economy will require smart strategy. That is why we chose PNC as our target to begin with. PNC is not only one of the largest funders of mountaintop removal coal mining (and fracking), it is also a Pennsylvania-based bank with Quaker roots, still the bank of several Quaker institutions. As a small group founded by Philadelphia Quakers, we saw a strategic opportunity to threaten the green image PNC has tried to promote.

Believing that an escalating campaign helps a group build both credibility and muscle, EQAT members did not begin by chaining ourselves to the bank doors. We began with a letter to the bank, followed by a meeting with PNC's regional head to discuss our demand that they stop funding mountaintop removal coal mining. We were cordial while delivering a clear if-then threat. If PNC did not clean up its investments, we would make sure the public knew about it.

We have kept our promise. In the three-plus years since then, we have gradually increased pressure on the bank, moving from low-risk actions -- like flyering and singing outside the PNC-sponsored Philadelphia Flower Show in 2010 -- to bolder actions like having several people risk arrest by setting up a "flower crime scene" inside the Flower Show a year later. In various PNC lobbies, we've sung Christmas carols with lyrics about PNC's policies, built a small mountain of dirt, put them on mock trial and built windmills -- all actions that were creative, fun and demonstrated graphically what we cared about.

While our core members grew in courage and skill, we also wanted to expand our core geographically. The Green Walk for Jobs and Justice in the spring of 2012 pushed us to find new allies as we walked 200 miles across Pennsylvania to Pittsburgh, where we conducted a civil disobedience training on the sidewalk in front of PNC's corporate headquarters. Next we trained more of our supporters to become action leaders themselves, so that by December 1, 2012, we could pull off fifteen bank actions in five states and the District of Columbia, demonstrating a major expansion of our capacity. When we returned to Pittsburgh the next April, we intended to make it impossible for PNC's annual shareholders' meeting to proceed as usual, even though that meant risking arrest. Although police outnumbered the 16 of us in the meeting, our protest led the CEO to shut down his meeting. For the first time, the bank publicly defended its investment policies, a sign that we were making an impact.

In 2013, we also adopted new approaches designed to pressure PNC decision-makers. Targeting PNC board members and high-ranking bank officials, we have been showing up where they least expect us -- from charity events to a breakfast in Britain, where British Quakers confronted Philadelphia-based PNC board member Jane Pepper about the bank's financing of mountaintop removal. We publicly challenge the bank's good-corporate-neighbor image, staging creative actions at events that it sponsors.

During PowerShift, we conducted trainings, reached out to students from across the country, and worked with allies from other organizations, who helped us pull off our ambitious plans. During the course of Monday, PNC locked the doors of five branches, scrambling to respond to both organized bands of protestors and individual students who had been instructed to deposit a penny a piece in a designated account in order to slowdown the bank's lunchtime business. Students in Philadelphia who could not make it to PowerShift showed solidarity by depositing pennies at the PNC branch at Temple University.

As the mid-day actions wound down, supporters of EQAT made their way to 600 Grant St, where seven Earth Quakers stood outside a locked PNC Branch, speaking about their concern for the people of Appalachia. As had been planned, Johannah Cordonhill, Ryan Leitner, Amy Ward Brimmer, Ben Shapiro, Michael Gagne, Walter Hjelt-Sullivan and George Lakey refused to leave when asked by police and were subsequently arrested amid the defiant singing of their supporters. It was close to twenty-four hours before they were all released on bail. On Monday, October 28, a judge sentenced them to time-served.

In addition to increasing pressure on PNC bank, one of EQAT's goals was to model strategic concepts like escalation for the activists at PowerShift. At the end of the day, one ally said, "I've been doing bank actions for a long time now and I learned so much today. I will be taking these lessons back to my own work."

Parts of this article were previously posted on Waging Nonviolence.