By SETH BORENSTEIN, The Associated Press

WASHINGTON -- WASHINGTON (AP) — Space is vast, but it may not be so lonely after all: A study finds the Milky Way is teeming with billions of planets that are about the size of Earth, orbit stars just like our sun, and exist in the Goldilocks zone — not too hot and not too cold for life.

Astronomers using NASA data have calculated for the first time that in our galaxy alone, there are at least 8.8 billion stars with Earth-size planets in the habitable temperature zone. 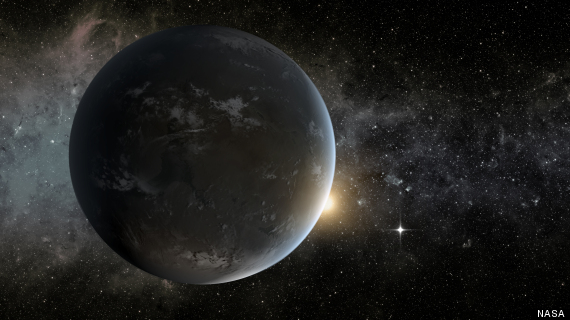 Kepler-62f with 62e as Morning Star
The artist's concept depicts NASA's Kepler mission's smallest habitable zone planet. Seen in the foreground is Kepler-62f, a super-Earth-size planet in the habitable zone of a star smaller and cooler than the sun, located about 1,200 light-years from Earth in the constellation Lyra.
Image credit: NASA Ames/JPL-Caltech/Tim Pyle

The study was published Monday in the journal Proceedings of the National Academy of Science.

For perspective, that's more Earth-like planets than there are people on Earth.

As for what it says about the odds that there is life somewhere out there, it means "just in our Milky Way galaxy alone, that's 8.8 billion throws of the biological dice," said study co-author Geoff Marcy, a longtime planet hunter from the University of California at Berkeley. 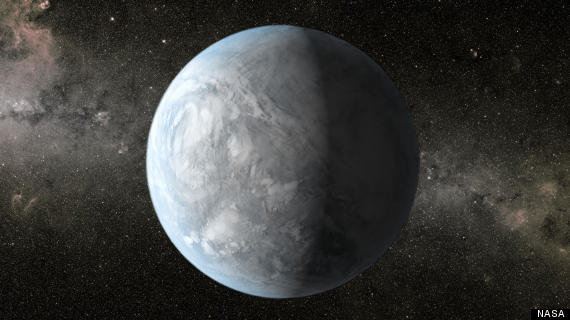 Kepler-62e
The artist's concept depicts Kepler-62e, a super-Earth-size planet in the habitable zone of a star smaller and cooler than the sun, located about 1,200 light-years from Earth in the constellation Lyra.
Image credit: NASA Ames/JPL-Caltech

The next step, scientists say, is to look for atmospheres on these planets with powerful space telescopes that have yet to be launched. That would yield further clues to whether any of these planets do, in fact, harbor life.

The findings also raise a blaring question, Marcy said: If we aren't alone, why is "there a deafening silence in our Milky Way galaxy from advanced civilizations?" 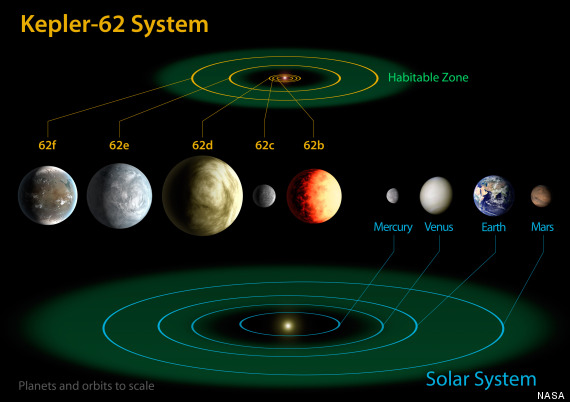 Kepler-62 and the Solar System
The diagram compares the planets of the inner solar system to Kepler-62, a five-planet system about 1,200 light-years from Earth in the constellation Lyra. The five planets of Kepler-62 orbit a star classified as a K2 dwarf, measuring just two thirds the size of the sun and only one fifth as bright. At seven billion years old, the star is somewhat older than the sun.
Image credit: NASA Ames/JPL-Caltech

In the Milky Way, about 1 in 5 stars that are like our sun in size, color and age have planets that are roughly Earth's size and are in the habitable zone where life-crucial water can be liquid, according to intricate calculations based on four years of observations from NASA's now-crippled Kepler telescope.

The Kepler telescope peered at 42,000 stars, examining just a tiny slice of our galaxy to see how many planets like Earth are out there. Scientists then extrapolated that figure to the rest of the galaxy, which has hundreds of billions of stars. 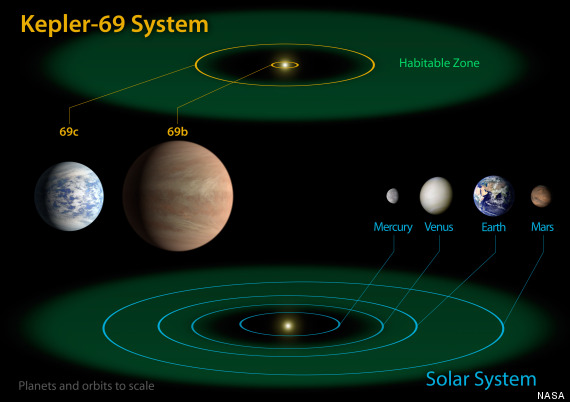 Kepler-69 and the Solar System
The diagram compares the planets of the inner solar system to Kepler-69, a two-planet system about 2,700 light-years from Earth in the constellation Cygnus. The two planets of Kepler-69 orbit a star that belongs to the same class as our sun, called G-type.
Image credit: NASA Ames/JPL-Caltech

For the first time, scientists calculated — not estimated — what percent of stars that are just like our sun have planets similar to Earth: 22 percent, with a margin of error of plus or minus 8 percentage points.

Kepler scientist Natalie Batalha said there is still more data to pore over before this can be considered a final figure.

There are about 200 billion stars in our galaxy, with 40 billion of them like our sun, Marcy said. One of his co-authors put the number of sun-like stars closer to 50 billion, meaning there would be at least 11 billion planets like ours.

Based on the 1-in-5 estimate, the closest Earth-size planet that is in the habitable temperature zone and circles a sun-like star is probably within 70 trillion miles of Earth, Marcy said.

And the 8.8 billion Earth-size planets figure is only a start. That's because scientists were looking only at sun-like stars, which are not the most common stars.

An earlier study found that 15 percent of the more common red dwarf stars have Earth-size planets that are close-in enough to be in the not-too-hot, not-too-cold Goldilocks Zone.

And that's just our galaxy. There are billions of other galaxies.

Scientists at a Kepler science conference Monday said they have found 833 new candidate planets with the space telescope, bringing the total of planets they've spotted to 3,538, but most aren't candidates for life.

Kepler has identified only 10 planets that are about Earth's size circling sun-like stars and are in the habitable zone, including one called Kepler 69-c.

Because there are probably hundreds of planets missed for every one found, the study did intricate extrapolations to come up with the 22 percent figure — a calculation that outside scientists say is fair.

Seth Borenstein can be followed at http://twitter.com/borenbears