In the tight race between Sanders and Clinton, it is the superdelegates who will decide who the Democratic nominee is. But there's one ultra-superdelegate that hasn't weighed in yet: the Earth.

Sure, the Earth isn't a person, but neither are corporations, yet they are considered people by the U.S. Supreme Court, allowing them to buy politicians and influence elections. So why can't the Earth have its say? 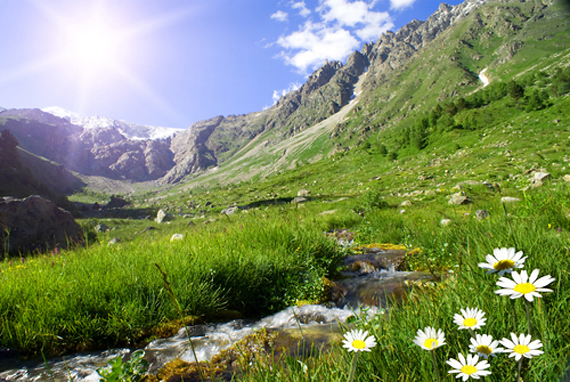 It may seem strange for a Canadian who works in the freight industry to chime in on the Earth's perspective of the U.S. presidential election, but hear me out.

My husband and I run a technology startup making shipping more efficient while reducing emissions from freight transportation. Last month we were honored to share our vision of a green future for freight in the G7 Summit publication, Climate Change: The New Economy.

On a more personal note, we immigrated to Vancouver, Canada from sunny California in 2003 to get away from ground-level ozone pollution that was causing severe asthma in our son. Some of our friends thought we were "Bush-dodgers", but in fact we were environmental refugees.

The Earth certainly doesn't approve of climate change-denier, Donald Trump. We don't even need to have that discussion. But what about Hillary Clinton?

I believe the Earth was pleased to see Sanders push Hillary Clinton left on environmental issues during the Democratic debates. He caused her to flip-flop on her stances on the TPP and fracking. However, considering she helped promote both around the world, and changed her position on nuclear energy several times, the Earth took her new "stances" with a grain of sea salt.

And then there was that time last November when Clinton said she'd do away with the coal industry if elected president, only to retract that statement 6 months later. Just wait until she secures the nomination and starts moving further right.

Also, don't forget that Greenpeace has documented "the campaign to elect Hillary Clinton for president in 2016 has received more than $6.9 million from lobbyists, bundlers, and large donors connected to the fossil fuel industry." They surely expect something in return.

To make matters worse, the US military is responsible for the largest and most egregious pollution of the planet. The New York Times would like to remind us, citizens of Earth, that Clinton is the only true war hawk left in the race, outranking Trump.

So without even zooming into details of Bernie Sander's leadership in the fight against the Keystone Pipeline, his anti-war and anti-nuclear positions or his extensive plans to fight the fossil fuel industry and invest in clean, sustainable energy, it comes as no surprise that the Earth would like to officially endorse Bernie Sanders as the President of the United States.