"So you suggest that from this," Bill Moyers asked his guest, "begins the new myth of our time?"

He was referring to "Earthrise," the now-famous photographic image of our planet rising into view above the lunar horizon. The crew of Apollo 8 took the photo on Christmas Eve Day, 1968.

"Yes," replied mythologist Joseph Campbell. "This is the ground of what the myth is to be." They sat together on the set of The Power of Myth, a TV special filmed at George Lucas's Skywalker Ranch in California. Lucas and Campbell were friends, as you can probably tell from the heroic motifs that permeate Star Wars.

What in the world is a "myth for our time?" And what could Earthrise have to do with it?

"Myth" is a funny word in American culture. We tend to think of myth as a lie or as an outdated explanation for a mystery long since cleared up by science. But as Campbell and a host of other mythologists, writers and storytellers have observed, myth is actually a framework of meaning, a set of collective fantasies that story our relationship to each other, the world and the cosmos. To tell a myth is to tell a culture's dream about its inner workings and truths.

Myth does not convey these truths literally, however. Like a night dream, a myth tells its tale through symbol, image and metaphor. That is why a literalistic approach cannot grasp myths. They are too slippery, too rich, too multidimensional for that. They don't explain so much as offer an enchanting, elevating or disturbing experience, sometimes giving off bright future visions and sometimes warning us about where we should not go.

Myths continually come back to life all around us. No age or people leaves them behind because we always face the recurring problems of life they address. The Big Bang theory is, mythically considered, our Creation Story about how we got here -- a story similar to the cosmic egg that opens in so many myths of other cultures. "Apollo" is an apt name for a space program determined to hit a distant target, for Apollo was a far-seeing god of archery.

The planets, the days of the week, the constellations and our galaxy are all named for myths. When scientist Robert J. Oppenheimer watched the first atomic detonation, his reaction was not cool and objective, but mythic: "I am become Death," spoke the god Vishnu in his imagination, "the destroyer of worlds."

Game of Thrones, The Lord of the Rings, The Avengers, Superman, Batman, Pan's Labyrinth, Harry Potter, extraterrestrials as modern angels or demons, artificial intelligence as the return of the Golem, mass surveillance as the hundred-eyed Argus monster, the Golden Age politicians like to point back to, mythically named sports teams like the San Francisco Giants: The weave of myth binds all levels of culture together, even when gathered up for entertainment. Even the hard practicality of money harks back in name to Moneta, the Roman goddess in whose temples specie was stored. The bronze bull in front of the Wall Street Stock Exchange unintentionally recalls the metallic bull god Moloch, ever hungry for human sacrifices. Be careful during the Witching Hour...

If myth is a storied way to feel out our place in the world, then we can grasp the significance of Earthrise by considering what it rode in on. The Environmental Movement, ecopsychology, Systems Theory, the Internet that joins us across the globe, global structures of finance, the Goddess movement, the push toward sustainability, organic agriculture, Brian Swimme's inspiring cosmological reveries: these and other worldly-circling matters grew up in the light of Earthrise. This image did not "cause" these movements so much as announce them as they swarmed into collective consciousness.

Campbell explained this to Moyers about Earthrise:

The only myth that is going to be worth thinking about in the immediate future is one that is talking about the planet, not the city, not these people, but the planet, and everybody on it....When you see the earth from the moon, you don't see any divisions there of nations or states. This might be the symbol, really, for the new mythology to come. That is the country that we are going to be celebrating.

As Campbell stated elsewhere (a TV interview is a bad time to get technical), he did not believe that a single myth could organize all human affairs from the top down. What he meant was that the rich, multilayered image of Earthrise was just starting to unfold its potential. Even four decades after it was photographed it has yet to reveal itself completely in all its blue-green glory.

As we face the increasingly disturbing news about global warming, and as its effects -- including disastrous weather and mass displacement -- accelerate into public view, we might keep Earthrise in mind as a hopeful image around which to rally our efforts to create cultural structures capable of adapting intelligently to a changing planet.

We're going to have to be resilient, personally and collectively, as weather worsens and governing institutions either reinvent themselves or shatter. To stand up to what is coming, we must outgrow the kinds of splits that led to such dire results: splits like us and them, self and world, inside and outside, North and South, nature and culture, head and heart.

Before he died in 1987, Campbell offered one last holistic and heartening insight about Earthrise and the time it ushers in: 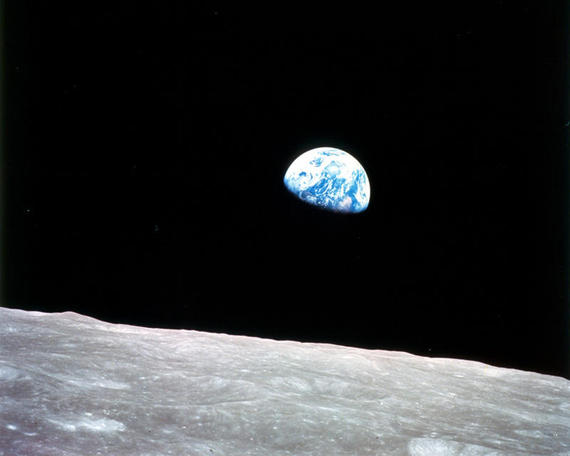