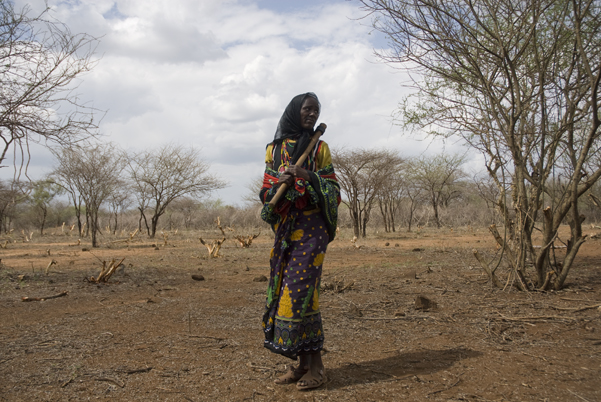 If only food and water were as plentiful as the stories of hardship and sadness we've heard the last few days as we've crisscrossed the drought-ravaged region of southern Ethiopia, from Yabello to Negele and back. But the story that haunts me the most is the one without an ending, the one told by a mother counting the days since she last saw her husband and son.

Her name is Adi Bonaya and she is 30 years old.

She stands straight and tall as she speaks, gripping the axe hooked over her shoulder, the axe that is now helping her feed her family. Bonaya is participating in an Oxfam cash-for-work program -- a short-term emergency initiative that pays villagers to work on community improvement projects. The money they earn -- 700 birr a month, about enough for a 100-kilogram sack of corn -- allows families to buy the basics they need, especially food.

Stretching out behind her is an expanse of sun burnt earth, bare except for the splintered stumps, stripped of their bark, Bonaya and a crew of workers left behind as they cleared the brush with their axes. Heaped together in a tangle of branches and thorns, the brush has now become a fence too sharp and thick for animals to pass through. The goal is to give the land inside a chance to recover and become productive once more.

The grasses here in this Kancharo pasture will grow tall, but probably not in time to save Bonaya's family from further hardship. Already half of their 30 cows are dead, and as they withered -- starved for pasture and water -- so have the fortunes of her family, who depend on their animals for food and income.

"There are so many problems," says Bonaya. "The drought has taken all that we have."

And still it keeps scorching.

A mother of four children, all Bonaya has to feed them now is tea in the morning and corn twice a day. As their herd grew weaker and its numbers dwindled, Bonaya's husband made the decision to take their remaining cattle -- 15 -- and walk with them to Teltele, an area more than 50 miles north. Word had traveled among the herders that there, further from the Kenyan border, conditions were slightly better. Maybe enough grass would be growing to ensure the animals' survival. Accompanying him on the trek was the couple's eldest son.

I think of the young herding boy I met the day before, stoic and self-sufficient at just 15. He was alone with his family's cows, on a week's journey to find them food and water. And I think of my own two sons, and the fears and hopes I have for them as they make their way through early adulthood far from me.

Bonaya's son and husband took a supply of grain with them when they left for Teltele. But surely they have eaten every bit of it by now, she says: They have been gone more than a month. And then she tells, with aching exactness, of the days she has counted since she last heard from them: 34. In a community where news travels fast, even without the benefit of much technology, I imagine that silence must be nearly unbearable.

Alone now in the cleared pasture -- a few acres of hope for the future -- Bonaya says she fears that her husband and son might die.

Her words hang in the air for a moment, the truth of them stunning us. Beyond the loss of family assets and livelihoods, this is what drought means: fear and agonizing uncertainty about those you love most, day after day.

Coco McCabe filed this report from Ethiopia, where she is reporting on the severe drought in East Africa. In August, she visited an area in northern Ethiopia -- which has thus far escaped this year's drought but has been devastated in the past -- to report on initiatives to fight recurrent drought. Her reporting is featured in a World Food Day half-hour documentary special report from ViewChange and Oxfam: "ViewChange: Africa's Last Famine," which is available online at www.oxfamamerica.org and www.viewchange.org and broadcasts on Link TV on Friday, October 14, and Tuesday, October 18.