"We ordered a dozen oysters," a loved one mentioned to us recently, "and the server asked, 'What kind?' We had no idea, so we just said bring us whatever you like."

Sound familiar? If you've ever looked up at a raw bar menu with trepidation, mind reeling from the possibilities, you are not alone. We've all been there.

In her classic book "Consider the Oyster," MFK Fisher describes the "dreadful but exciting life of an oyster" like this (obviously, this is the reason we're starting with East Coasters):

American oysters differ as much as American people, so that the Atlantic Coast inhabitants spend their childhood and adolescence floating free and unprotected with the tides, conceived far from their mothers and their fathers too by milt let loose in the water near the eggs, while the Western oysters lie within special brooding chambers of the maternal shell, inseminated and secure, until they are some two weeks old. The Easterners seem more daring.

It turns out, there are about as many kinds of oysters as there are kinds of vegetables. Okay fine, that last thing was an exaggeration, but there are A LOT. Since we know you are busy, we'll cover some of the most common East Coast oyster varieties: where they come from, what they taste like and what tastes best with them (full disclosure: sometimes the answer will be 'Nothing! Eat them just how they are!') 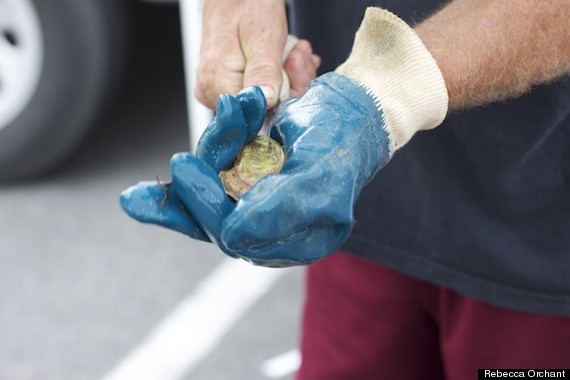 We promise not to get too scientific on you, since we suspect that you -- like us -- are more interested in pouring oysters into your face than you are in their Latin names. Soon, you'll be able to let your raw bar server know whether you like a small or large oyster, meaty or crisp, briny or sweet. Everyone will be impressed, and you will get to enjoy one of nature's loveliest delicacies with utmost confidence.

Every oyster devotee has their favorite serving and eating methods. If we miss your favorite, let us know in the comments!

Blue Point Oysters (Long Island, NY)
Flickr: T. Carrigan
Named after the town of Blue Point, Long Island, these are probably the oysters you will most commonly find on the East Coast side of your raw bar. These medium-sized oysters are mild, pleasantly salty and very meaty. Blue points are great beginner oysters, as they won't overwhelm you, and go well with a classic spicy cocktail sauce or this celery seed and dill spiked version. Photo via Flickr user T. Carrigan
Wellfleet Oysters (Wellfleet, MA)
Rebecca Orchant
We stopped by the Wellfleet Oyster Co.'s stand at the Provincetown farmer's market to chat with them about our favorite East Coast oyster (well, to chat and eat, duh). Their recommendation for these Cape Cod oysters that grow sweet in cold, calm waters: eat them just as they are, straight out of the shell and do not pour off the juice. Consider the liquor in this shell a splash of salt. A squeeze of lemon can be nice, but these oysters are delicious enough to stand on their own.
Pickle and Raspberry Point Oysters (Prince Edward Island, Canada)
aja Chicago
Pickle Points, and their sister oyster Raspberry Points, both come from the same cold waters off PEI. They are dense, meaty and live in a curved, yin-yang-shaped, green shell. These oysters are six to seven years old at harvest, and tend to be incredibly sweet. We like to balance their sweetness with a classic, vinegary mignonette sauce.
Malpeque Oysters (Prince Edward Island, Canada)
Chef's Resources
Also from PEI, Malpeque oysters have very tender meat, with a nice balance of brininess and sweetness. These crisp oysters are sometimes said to taste a bit like lettuce. A little lemon and and a dab of horseradish should be all you need on these beauties. Photo via Chef's Resources
Beau Soleil Oysters (New Brunswick, Canada)
Flickr: T. Carrigan
Beau Soleil oysters (the two left oysters in the picture) are Canadians as well, but these meaty bivalves hail from New Brunswick. These oysters are known for their deep cups and meaty texture, which means they can stand up to this spiced-up, citrusy mignonette. Photo via Flickr user T. Carrigan
Chincoteague Oysters (Chincoteague Island, VA)
Flickr: TheLawleys
These southerners can be tricky, as they are often impersonated. True Chincoteagues are long, skinny things with plenty of salinity and a sweet finish. But, other oysters are often brought to Chincoteague's waters to hang out in a salt bath for a bit, making them mostly just salty. If you get true Chincoteagues, enjoy them on the half shell. If you get imposters, don't despair -- this is a great time to give broiled oysters a whirl. Photo via Flickr user TheLawleys
WiAnno Oysters (Cape Cod, MA)
WiAnno Oysters
WiAnno oysters are cultivated in a protected in calm, protected beach waters, which makes them incredibly clean and quick to grow plump. Because they grow so quickly, their shells can be brittle, making them harder to shuck. If this gives you trouble, it's a great time to try grilling your oysters -- pop them on whole and they open up when they're ready!
Duxbury Oysters (Cape Cod, MA)
Chef's Resources
Duxbury oysters are grown in some of the coldest water in the Cape Cod bay, meaning they never go into spawn, but they do fatten up as if they are going to. This means that they have deep cups filled with fatty meat that has an extremely buttery finish. These are delightful raw, but because their fat content keeps them from drying out, they are also great candidates for roasting. This image by Chefs-Resources.com is licensed
Quonset Point Oysters (Narragansett Bay, RI)
Marx Foods
These small, delicate oysters from calm Rhode Island waters are mild, briney and clean. They are only for advanced shuckers, however, as these pampered mollusks have very dainty shells. Definitely eat these raw. Image via Marx Foods
Belon Oysters (Damariscotta River, ME)
Chef's Resources
Okay, disclaimer time: Belon oysters are not for beginners. This European flat breed is unlike any oyster you've ever seen or tasted. They have a very strong flavor, more minerally than briny, and are massive and meaty. They are also pretty rare, so if you get the chance, dive in. This image by Chefs-Resources.com is licensed
Pro Tip: How To Shuck Oysters
Just in case you want to shuck a few of your new obsession at home. All you need is an oyster knife, a dry kitchen towel, a little patience and (duh) oysters.

More:
how to eat oystersoystersVideocooking how toTaste
Newsletter Sign Up