(AP JERUSALEM - Crowds of Palestinian youths violently rampaged in east Jerusalem Wednesday following the shooting death of a local man, clouding fragile peace efforts even as the Palestinian president signaled he may back away from threats to quit negotiations if Israel resumes West Bank settlement construction.

At one point, Israeli riot police stormed the hilltop compound known to Jews as the Temple Mount and to Muslims as the Noble Sanctuary -- the most explosive site in the Israeli-Palestinian conflict, and the place where the last Palestinian uprising began almost exactly 10 years ago.

That uprising -- which killed thousands of people over some five years of violence -- erupted after a failed U.S.-led peace effort at Camp David. Wednesday's outburst comes less than a month after the sides resumed peace negotiations, at a tense moment when those talks are already facing possible collapse over Israel's plans to end its 10-month slowdown of construction in the Jewish settlements of the West Bank.

The "moratorium" on construction was declared last November under intense U.S. pressure to help coax the Palestinians into talks with the government of Prime Minister Benjamin Netanyahu, who -- despite having accepted the principle of a Palestinian state -- inspires very little faith in the Palestinians. Netanyahu said all along that the measure would end on Sunday -- and the Palestinians have threatened to walk away from the talks if this occurs.

The impasse and looming deadline have created a palpable tension that has built throughout the week. PHOTOS OF THE VIOLENCE IN EAST JERUSALEM:

On Monday, Israel's deputy premier made a public call on the Palestinians to abandon their demand, casting such a move as a mutual "compromise" in which Israel might retain some of the restrictions. On Tuesday, Israel's military chief warned that a collapse of the talks could well lead to violence.

Meanwhile, the Israeli political system braced for either outcome. If Netanyahu backs down and extends the freeze, troubles with his pro-settler coalition partners are likely and he would have to persuade the centrist Kadima party to join the coalition.

If he doesn't and the talks break down, Israel's international standing would suffer -- alongside the possibility of renewed violence with the Palestinians.

A glimmer of hope arrived from the United States, where Palestinian President Mahmoud Abbas indicated a possible softening of his position in a Tuesday night address to prominent American Jewish figures.

"I cannot say I will leave the negotiations, but it's very difficult for me to resume talks if Prime Minister Netanyahu declares that he will continue his (settlement) activity in the West Bank and Jerusalem," Abbas said, according to a transcript of the event obtained by The Associated Press.

The Palestinian ambassador to the United Nations later said Abbas' comments had been misconstrued and Abbas was still ready to walk away.

"The position of the president is still the same," Riyad Mansour said. But he stopped short of a denial, and the S. Daniel Abraham Center for Middle East Peace, which sponsored the meeting, said the comments were recorded and Abbas was speaking in English.

In Israel the story led news reports -- before being overtaken by the ominous outburst of violence.

Clashes erupted in the Silwan neighborhood shortly after a 32-year-old Palestinian man was killed by a private Israeli security guard watching over Jewish families in the area. About 70 ultranationalist Jewish families live in Silwan, amid some 50,000 Palestinian residents.

Israeli police said the man, Samir Sirhan, had a criminal record and was shot overnight after a group of youths pelted the guard with stones. But residents said that Sirhan, a father of five young children, was unlikely to have participated in the violence. They also noted he was killed at about 4 a.m., an unlikely time for stone throwing.

After the shooting, rioting spread throughout Silwan and to the nearby walled Old City, intensifying during the man's funeral.

Young men and boys with their faces covered with T-shirts to avoid identification set fire to garbage bins and tires, sending plumes of smoke across the crammed neighborhood.

They hurled concrete chunks and rocks at paramilitary police and demanded revenge. "We will defend you with our blood and souls, martyr," protesters chanted.

Police responded by firing off rounds of acrid tear gas, which wafted through the area.

A Muslim eyewitness on the compound said the clashes were brief.

The area was crowded with people for the beginning of the seven-day Jewish festival of Sukkot -- one of the three Jewish pilgrimage festivals during which Jews in biblical times would flock to Jerusalem.

Rosenfeld said the stone throwers fled into the Al Aqsa Mosque, Islam's third holiest site, and after a standoff for several minutes, riot forces pulled back without further incident.

A teenage boy held the hand of Sirhan's four-year-old son Sultan, taking him to where clashes were taking place. Later he walked among the protesters waving a large Palestinian flag.

"Kill the Jews!" he chanted, at the prompting of an elderly relative.

In other unrest, Palestinian youths overturned three cars with passengers inside, in one case dragging a man out of his vehicle and stabbing him. They smashed the windows of five buses, forcing passengers on one of them to flee, and a paramilitary police jeep was set on fire and destroyed.

The Association for Civil Rights in Israel, an Israeli advocacy group, recently wrote in a report that Israeli security firms act like a private police force for Silwan's Jewish residents. It said the firms often receive government funding and frequently use threats and violence against Arab residents, while police are reluctant to intervene.

The violence underscored the difficulty of bringing true peace to Jerusalem -- which will perhaps be the thorniest issue in the peace talks launched this month under U.S. aegis, with President Barack Obama saying he hoped for agreement within a year. Other challenges will be the future of Palestinian refugees and borders.

But for the talks to reach that stage, the current deadlock over the settlement freeze will have to be finessed -- and officials from both sides have been meeting on the dispute with U.S. mediators.

In his two-hour address to the Jewish leaders, Abbas called on Israel to extend the building restrictions for several months while the sides negotiate the big issues. "At that time, Israelis will be free to build in their territory and the Palestinians the same," he said.

Abbas struck a conciliatory tone as he answered questions, referring to Netanyahu several times as his "partner" in the quest for peace.

"Is there a more significant and more precious to goal than achieving peace?" he said. "We believe that our children and grandchildren deserve a better future for peace, prosperity, dignity, and security."

Israeli officials reacted with caution to the comments.

"Israel wants this process to move on. We believe historical reconciliation is possible. What is important when problems arise in negotiations is to overcome those problems and not allow them to derail the process," government spokesman Mark Regev said. 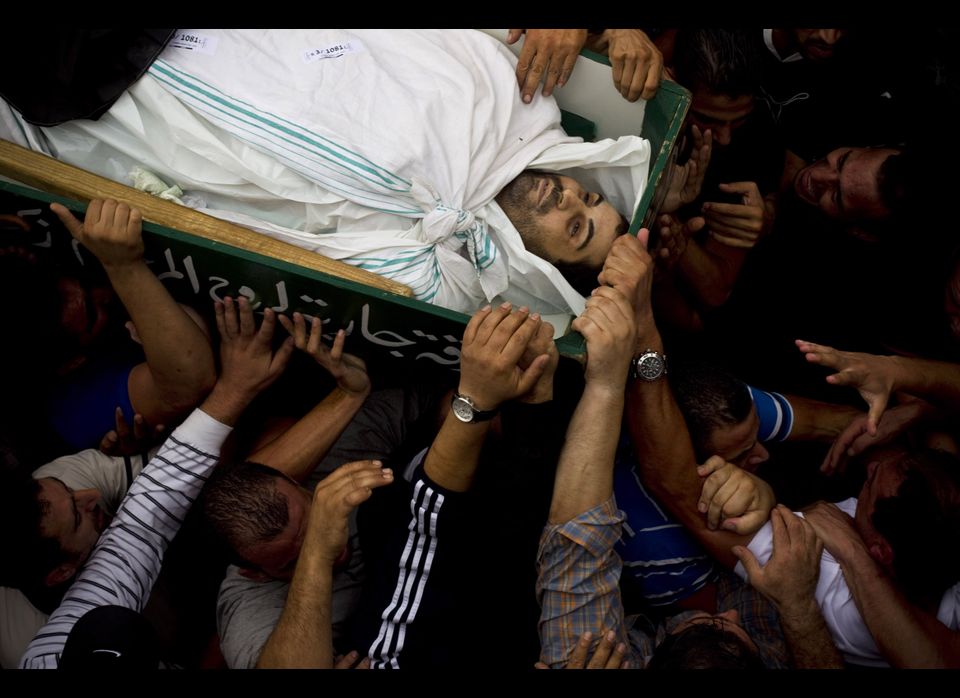 1 / 8
Palestinian mourners carry the coffin of Sami Sirhan during his funeral in the east Jerusalem neighborhood of Silwan Wednesday.
AP