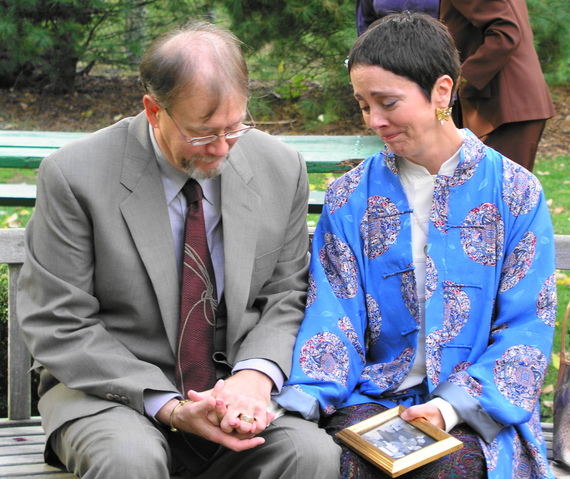 My husband and I, on our wedding day, holding a photo of my late parents.

On Pearl Harbor Day, 1972, at the age of 57, my father died in an ICU unit several floors above the Emergency Room where I was working prior to enrolling at the Medical University of South Carolina.

After losing her spouse of 33 years, the admitted love of her life, my mother would always be a Christmas Widow.

For her, a heretofore joyous holiday became, first and foremost, a time of remembering and mourning.

The term "Christmas Widow" (which I have invented, of course) has nothing to do with any specific religious feast, though the holidays associated with "rebirth in winter" comprise some of the most hopeful we have ever imagined as human beings. "Love in winter," as it were. Roses in the snow.

On the other hand, the Easter holidays, death and dismemberment festivals which seem to commemorate the ploughed-under harvest, the hero who dies far too young, and the grieving mother--those holidays we consign to another part of the calendar.

Perhaps Christ, or Osiris, is easier to bury, even if temporarily, in the springtime, when Nature makes fecund promises of regeneration above and beyond the grave.

But Christmas, despite the child in the manger, occurs in the dead of winter, its festive, pagan trappings not quite up to dispelling the chill... and the vast expectations of "comfort and joy" that, after childhood -- even a happy childhood -- must always be dashed.

Felled by grief that Christmas of 1972, my mother and I could not even comfort one another.

In the midst of life, she had lost the only true partner, the only absolutely loving other, she had ever known, and would ever know.

At the beginning of my own life, I had lost my father in his prime, while I was still too much of an adolescent to know him as an adult.

My mother had been a joyful wife since the age of 19. At 52, she became a widow, and would inhabit that role, before all others, for the rest of her life.

In truth, despite her sophistication, she had never imagined a life without her husband; herself without him.

It was intolerable that he had vanished from her side. She had never envisioned it.

My own grief was as nothing compared to her black, depthless rage which, back then, I could not fathom.

True, I had read Dylan Thomas in the classroom ("Do not go gentle into that good night... Rage, rage against the dying of the light"). but, in the realm of plighting one's troth, I was totally unschooled.

To plight, or pledge, is to promise, to vow, to enter into a covenant... to seal one's fate. The verb trails behind it the serious and fraught raiment of Middle English, Old English (pliht danger, risk; plihtan, to endanger, risk, pledge), German (pflicht, obligation) and Indo-European (dlegh to engage oneself). The original root word means something like "to fold" -- to fold over, into. To enfold.

The 19-year-old, in her white dress, plights her troth, in a moment of blind hope and splendid passion, and will not want whispered in her ear that the man at her side will not always be there.

Into her narrow white shoe, I would have her -- and every Easter Bride -- place a sharp stone, to remind her, as she walks forward into marriage, that there is a shadow floating above her. Knowing the shadow is there will not keep her or her groom safe, but knowing it is there will perhaps enable her to hold back just a tiny piece of her maiden's heart, upon which to feed in the certain time of famine. Perhaps. At least, she will have the option.

At 19, or much later (in my own case, for example), plighting one's troth means risking indescribable loss, certain loss... of one the other. The essential other.

And it is a risk that should be written into the marriage ceremony none of us ever speaks aloud: "To experience the joy, the union, the creative maelstrom that marriage can be, I understand and choose (also) the risk of losing you. I risk losing you without a moment's notice, or after long illness. I risk losing you; or you, me. And, with this ring, I accept that risk."

Right now, just before Christmas of 2015, I say to my women friends who were widowed this past year, you do not want to remember that, for a split second back then, dressed in white (or in a blue, silk Chinese coat, as I was), you and I agreed to pay the steep price for joy.

But you will remember, in time.

And remembering may bring all the comfort possible.

That you chose love is the crucial thing. That you chose, and that your choice was, whatever you may feel today, "informed." That is of the essence.

You chose. He chose. And the bill always comes due.

Death tosses you into an abyss out of which no arms can lift you, ever, but your own.

That you do not notice, at first, that my mother is down there with you in the abyss, and that, perhaps, I will join you there shortly, is of no importance to you just now. This misery loves not company, nor can it even register company.

But... think back now. Are you remembering that you had intimations? That you knew, in the midst of joy, that this could happen?

Try to remember now, too, that you are not "unaccompanied." The other Christmas Widows, and perhaps they alone, understand you; and you, them.

My mother's widowhood was an inoculation, of sorts, against this bride's natural amnesia.

At 49, when I met my husband, I knew what it was to plight one's troth, and risk the greatest unhappiness for the greatest happiness.

Doubt many things this Christmas, Oh Best Belovéd, but do not doubt that your choices were sound ones, on those long-ago Easters. Take the stones from your shoes, and give them to the new Easter Brides -- not for comfort, but for wisdom.

Do not go gentle into that good night
By Dylan Thomas

Do not go gentle into that good night,
Old age should burn and rave at close of day;
Rage, rage against the dying of the light.

Though wise men at their end know dark is right,
Because their words had forked no lightning they
Do not go gentle into that good night.

Good men, the last wave by, crying how bright
Their frail deeds might have danced in a green bay,
Rage, rage against the dying of the light.

Wild men who caught and sang the sun in flight,
And learn, too late, they grieved it on its way,
Do not go gentle into that good night.

Grave men, near death, who see with blinding sight
Blind eyes could blaze like meteors and be gay,
Rage, rage against the dying of the light.